Is anyone talking about RRR? And if not, why not?? It’s on Netflix, but it’s still playing in cinemas if you can find out. I just saw it last night, and it may be my greatest cinematic experience of all time.

JD posted this in the Netflix thread, but I don’t think it’s been mentioned since.

I’m waiting for it to come to a streaming service I have. I don’t think it’s on Netflix in the U.S. so I haven’t subscribed to Netflix for it yet. I think I’ll get Netflix when the final episodes of this season of Stranger Things come out.

I noticed that RRR seems to be available on Netflix in a few territories now. If you don’t know what that is, then, uh, brace yourself. [RRR Official Trailer (Hindi) India’s Biggest Action Drama | NTR,RamCharan,AjayD,AliaB | SS Rajamouli] Patrick Willems was gushing about it. [RRR - The Biggest Blockbuster You've Never Heard Of]

EDIT: Oh hey, I checked Justwatch, and it is on Netflix in the U.S. now. So when I get Netflix in July for Stranger things, I can watch it.

I watched it over a couple of days last week, and it’s my favorite movie I’ve seen this year.

I just love everything about it. The relationship between the two dudes, the crazy awesome action sequences, the songs, the violence. I got teary-eyed from the pure joy and catharsis of the finale.

I know we’re kind of spoiler-averse here, so I don’t want to link out to various articles describing some of the action, but suffice to say that it delivers on over-the-top drama and action. I watched it on Netflix in the US, where it’s dubbed in Hindi, but the Telugu soundtrack has been seeing heavy play in my house since.

Enjoyed this a good bit, as well. Got the feeling everyone involved with the film had a blast in putting it together.

I know we’re kind of spoiler-averse here, so I don’t want to link out to various articles describing some of the action, but suffice to say that it delivers on over-the-top drama and action.

Yes, I also don’t want to spoil too much here. I went into it mostly blind and was definitely not disappointed! I don’t know how different it is in Hindi (apparently that version on Netflix is controversial), but I saw the Telugu theatrical version and it was fantastic.

I hope more people watch it so we can have a discussion! Check your local theatrical listings just in case it’s still there.

This was only showing for one day at our local movie theater and I was planning to go but then I got Covid. Sad trombone. I’m looking forward to it… the trailer was nuts.

FWIW, it is indeed on Netflix right now.

Also watched this on Netflix a few weeks ago after spotting it in the post mentioned aboved. Regret not having seen it on the big screen, but RRR didn’t have a theatrical run over here to begin with.

I enjoyed this a ton. It’s earnest and sincere about its corniness and feels adequately ‘epic’. The action set pieces are nicely staged and shot, and it has some genuine ‘fuck yeah’ moments, e.g. Bheem unleashing a truckload of animals.

I’m not a big fans of musicals, and it’s one of the reasons why Indian movies are often a hard sell for me, but the two main pieces here were nicely integrated and never felt like a drag to me.

The one bit I wasn’t particularly fond of about RRR is something it had in common with many other Asian movies: the English/US cast has some duds in it. Ray Stevenson is a veteran and does a solid job at moustache twirling, but the line delivery of some of the other actors is a bit awkard. That said, the local cast is really good.

but the line delivery of some of the other actors is a bit awkard.

Since the film is told from the Indian perspective, some of the English dialogue could be stilted on purpose. I’ve seen that before in plays, but I’m not sure if that’s why it was done here.

@emilyvdw
RRR: At intermission, a man screamed, “WHAT THE FUCK? IS THIS HOW PEOPLE FELT WHEN THEY SAW THE TRAIN PULLING INTO THE STATION??” and it may be the only rational reaction to this movie.
CraigM June 15, 2022, 7:19am #11

This is a fascinating breakdown of the film and its stars.

I’ve watched my share of Indian cinema, and this is very much on my list, but my ever limited TV time has been zero for months now, buying a house does that to you.

I’d still give the edge to Everything Everywhere All At Once as far as movie of the year goes, otherwise I’ll co-sign everything you said there. There’s been a lot of Naatu Naatu on rotation since I saw it.

Alsa EEAAO has an unfair advantage since I saw it at a cinema, and if I’d something that’s SO MUCH MOVIE as RRR is on a big screen with a crowd, it probably would’ve been number one with a bullet.

I’d still give the edge to Everything Everywhere All At Once as far as movie of the year goes, otherwise I’ll co-sign everything you said there.

I absolutely agree with you, but I will say this: During the movie I actually thought, “IS this better than Everything Everywhere All At Once??”, and that’s pretty miraculous.

Also, I just learned from the Patrick Willems video (absolutely DO NOT WATCH if you don’t want anything spoiled!) that the title “RRR” is because this is the first movie where stars Ram Charan, Rama Rao, and director S. S. Rajamouli have worked together. They liked the title so much, they made it into a backronym and added words to fit (in every language).

I was certain I had posted that video, but now I don’t see it in my post any more.

Am I crazy or did it get removed somehow?

Am I crazy or did it get removed somehow?

I only saw your post as it is now, sans video. Maybe you forgot to paste it in?

I am very sleep deprived, so possible! 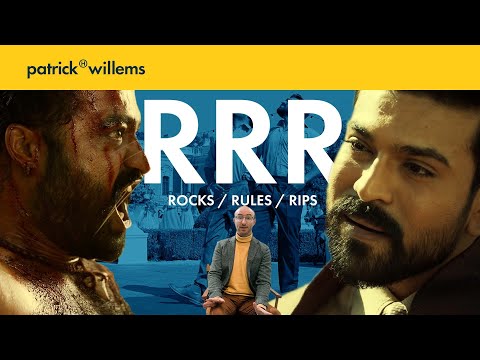 Here it is, and yeah super not for those wanting to avoid spoilers

RRR is playing in a nearby city this Friday, Saturday, and Sunday night. I’m really tempted to go see it again. I told my son about it, and he excitedly said, “All three nights???”

I watched it on Netflix in the US, where it’s dubbed in Hindi,

Ah that was it! I thought the sound was slightly off timing.

I loved it except for the whole plot with Jenny. It that like a trope in Indian cinema? I confess I’ve seen almost no other Indian films, but watched Lagaan a couple of months ago and it had a similar plot point with the pretty English lady who falls for the Indian hunk and helps him humiliate/murder her family.

So this was basically a mashup of The Departed and Inglorious Basterds but with dancing, which honestly makes it better :)

So this was basically a mashup of The Departed and Inglorious Basterds but with dancing, which honestly makes it better :)

Interesting. It felt very similar to Django Unchained to me, but there may be a lot of shared DNA between those two.

but there may be a lot of shared DNA between those two.