SS Rajamouli has explicitly acknowledged Inglorious Basterds as an inspiration for how you can go buck-wild with history. I’d agree that it feels more like Django thematically, but Django doesn’t involve historical figures the way RRR does.

Without going too far into spoilers, I would say that one major plotline from RRR is very similar to Django Unchained. I could see RRR as a superset of both Tarantino movies…but admittedly I don’t know much about the history of Indian colonization, so that similarity went over my head. I’ll have to do more reading!

If they were smart, they world have called it RRRRR for the qt3 topic search!

It’s interesting, Inglourious Basterds also came to mind for me where Django Unchained didn’t. I wonder if that’s some sort of litmus test for something.

For me, it was the slightly more modern setting, the sort-of-wartime setting, and the almost sadistic way that the antagonists get what’s coming to them. For whatever reason, Governor Scott surviving the explosion so the protagonists could assassinate him (which is kind of lurid and a little fucked up, the more I think about it) immediately reminded me of Hitler at the end of Inglourious Basterds.

I saw Django Unchained more recently, which might have something to do with it. I was thinking about how Django Unchained is a movie about a somewhat superhuman protagonist trying to sneak into the enemy stronghold so he can rescue the female being held prisoner.

It’s 2am, I just finished watching it on Netflix. Couldn’t stop.

What an epic, amazing ride. Easily right there with EEAAO for most crazily entertaining thing I have seen this year. But I felt RRR edged it out for some of the epic slow-mo action shots.

The first 20 minutes was some kind of subversive attempt to make me gay for burly indian men.

I mean if I was ever gonna swing that way I’d definitely have a Ram Charan poster on my wall.

Same here. I’m not really a mustache guy (or gay) but holy shit! 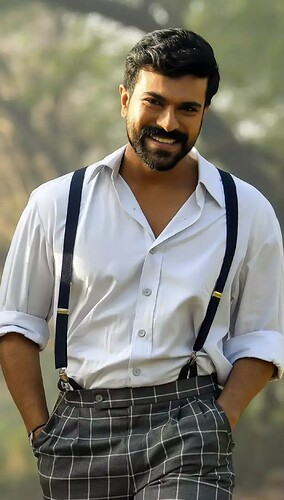 I wanted to talk a little bit about the finale (not the climax, but the bit at the very very end).

This shit is bonkers to me, in a good way. Let’s take a big American blockbuster, say… the first Avengers movie. Now, imagine that at the end of Avengers, the six leads plus Phil Coulson plus Joss Whedon come out to sing a very rousing song about the steadfast spirit of humanity. That’s essentially what’s happening here. Is that commonplace in Indian films? I didn’t think so, but I haven’t really kept up on them. It’s something I’ve literally never seen in a movie before – it reminds me of some finales from Broadway musicals, but I don’t think I’ve ever seen something that involves the director in that way.

I’d still give the edge to Everything Everywhere All At Once as far as movie of the year goes, otherwise I’ll co-sign everything you said there.

I own Everything Everywhere now that it moved to streaming, and I’ve started it a couple of times, but I really feel like it deserves my full attention with an uninterrupted viewing, so it will have to wait until the kids are away. But I really feel like this and that are going to fight with each other this year in my mind. I have thought about RRR every day since I finished it. The soundtrack is at the top of Spotify’s Most Recently Played every day. It’s got legs.

It’s something I’ve literally never seen in a movie before – it reminds me of some finales from Broadway musicals, but I don’t think I’ve ever seen something that involves the director in that way.

Zatoichi does it (including the director, although that’s a bit of a cheat), and is all the more striking for not having any musical numbers before then.

Marjane Satrapi isn’t in this, but it fits

Is that commonplace in Indian films?

There is one in Slumdog Millionaire, which is not an Indian film but is set in India. When the movie came out, all of the entertainment outlets wanted to talk about the ending number, which was strange because the entire movie was pretty dark up until then.

I’m 20 minutes in and this is already something very special. Love it.

It’s 01:20 and I just finished this and a bottle of red. I haven’t seen many Indian movies, but this one took me back all the way to this movie I watched ages ago as a kid:

Amar Akbar Anthony is a 1977 Indian Hindi-language masala film directed and produced by Manmohan Desai and written by Kader Khan. The film stars Vinod Khanna, Rishi Kapoor and Amitabh Bachchan opposite their female leads of Shabana Azmi, Neetu Singh and Parveen Babi, with Nirupa Roy, Pran and Jeevan in supporting roles. The plot focuses on three brothers separated in childhood who are adopted by families of different faiths: Hinduism, Islam, and Christianity. They grow up to become respectivel...

I love how these movies embrace the corniness, combine over the top action with musical numbers, and generally don’t give a fuck about anything but being fun to watch.

I think of RRR as the action-movie equivalent of a musical.

In a musical, when characters’ emotions are too overwhelming, they break into song, and no one questions it or calls it corny because that’s what happens in a musical. It’s an accepted part of the genre.

So in this movie, when characters’ emotions become too overwhelming (like the excitement of saving a kid or meeting a new friend), they do things like high-fiving underwater or picking up a flag in slow-motion right before riding a motorcycle off a bridge. It’s just that kind of movie.

This specific thing is actually something I really love about the movie because it’s actually functional and not just done for dramatic effect.

When you first watch the scene, his grabbing the flag is kind of weird… I wrote it off as just another over-the-top, national pride thing, like when the American flag shows up in a Michael Bay movie or something. But when they save the kid, they have to both swing in twice from opposite sides of the bridge – once to hand off the kid and the second time to save themselves. But that means they have to swing back out once, and Bheem’s side is still engulfed in flames. It’s then that I realized that the whole reason Ram grabbed the flag (and dunked it in the water on his way in) was so that Bheem would be protected from the flames on his backswing.

Of course, the flag itself being (I believe) one of India’s first flags representing its independence movement has a lot of meaning on its own. So I especially love that this particular imagery also had a very functional purpose in the action sequence it’s a part of.

(and dunked it in the water on his way in)

Completely missed that! Thanks!!!

Yup, he nicely soaks it.