Sakuna: of Rice and Ruin

Or, as the Japanese have it, “Heavenly Grain Princess Sakuna,” is an interesting game. Anyone playing it? I bought it for my girlfriend based on her love of farming games like Stardew Valley and occasional love of exploratory combat games like Breath of the Wild and Immortals. It’s a big hit, and I’m enjoying watching her play it.

For those who don’t know, it’s a mixture of side scrolling action platformer and fairly hardcore rice farming simulation. You play a disgraced half-war, half-harvest deity who must cultivate rice to grow her combat prowess and conquer an island overrun by demonic animals (whom you can also eat). The game has a day/night cycle and also a seasonal cycle, according to which you grow your rice, and every day ends with all of the characters (you have a human support team) sharing a meal of the things you’ve grown and killed (mmm, demonic rabbit meat).

I was definitely interested for a long time, and then it came out during a rush of other releases and I forgot all about it. I think Tim_James remembered it and played it.

Ah yes, here we go, from the arbitrary awards thread for 2020:

The Arbitraries (Create Your Own Year-End Award) 2020

The Brutality of Rural Life Award goes to Sakuna: Of Rice and Ruin. Midway through the game, the little baby character finds a pack of ducks that you keep in a pen and release each morning. They waddle adorably to your rice paddy and eat all the weeds. Late in the season, you’re given an option to keep them, at which point the eat some of your rice crop, or you can turn them into dinner. Coldest of all, the game doesn’t penalize you for murdering your happy ducks – the baby finds new ones each season, and the vicious cycle begins again.

I’m a little behind on this genre, and I just bought Stardew Valley last week.

Oh nice, it’s on Switch as well. I feel like this sort of thing would work great on Switch.

I forgot to mention the game is very Japanese. Also there appears to be next to no information on it in English, so your best bet if you need to find something out is to search “天穂のサクナヒメ wiki” and pray to the translation gods. As is the way of forums, people will, for example, mention casually that you need a skill called “swallow strike” (actually swallow slice) to do double jumps, but in no way mention how to get it or respond to follow up questions asking the same, but I finally found out by delving a Japanese wiki, where of course the skill is called something slightly different, but you get it by raising your rice’s stickiness to 990 and aesthetic to 1125.

Yeah, I think it’s everywhere (maybe not Xbox?). Switch is where she is playing it.

the game is very Japanese

I mean, it doesn’t take long on the Steam page to suss that one out ;)

Lack of English community is a bummer though.

The game is in my wishlist and I plan on buying and playing in the future.

The only thing holding me back on this one is the price. It’s never been below $40.

The gimmick that I’ve heard mostly is that the rice farming / harvesting is essentially completely historically accurate, and the games doesn’t tutorialize it in any way at the beginning. So, you’re basically discovering thousands of years of rice cultivation experience manually over the course of the game. Things like when to flood the fields, how deep, how far apart to plant the rice, when to transplant, etc. are all up to you do discover for yourself.

My wife played a bit but soured on the platforming difficulty. 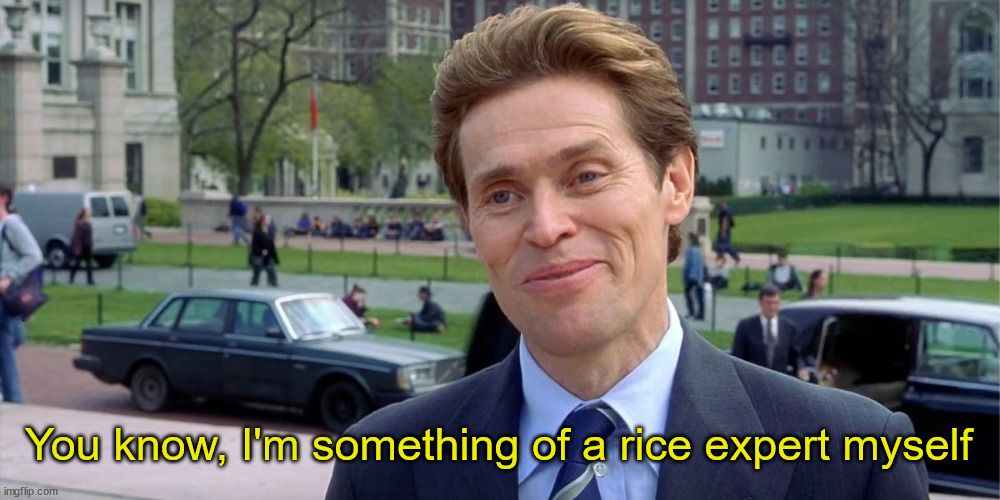 The essentially completely historically accurate rice farming aspect has always had a certain odd allure to me. Coming from someone who loves games like American Truck Simulator, I think my curiosity streak is down for learning some rice farming.

There’s no cutesy stuff with your livestock. Kill 'em and cook 'em with the time is right.

The gimmick that I’ve heard mostly is that the rice farming / harvesting is essentially completely historically accurate, and the games doesn’t tutorialize it in any way at the beginning. So, you’re basically discovering thousands of years of rice cultivation experience manually over the course of the game. Things like when to flood the fields, how deep, how far apart to plant the rice, when to transplant, etc. are all up to you do discover for yourself.

This stuff is actually great. It’s miles more intriguing than the usual rote “press A to drop seed/apply water/harvest crop” stuff in Stardew Valley and its ilk.

And the writing in the game is pretty good, too! A light touch with the humor and tons of charm.

My wife played a bit but soured on the platforming difficulty.

It all comes down to this. I didn’t find it particularly difficult, as there’s no real time pressure, so you can just grind at whatever level of pushback you want. But it does get really tedious. I wish Sakuna were paired with almost any other kind of game, because all that retro 2D platforming, combat, and “exploration” was such a buzz kill for me. :(

It looks a lot more engaging than the combat in Stardew Valley, at least.

Also I can personally guarantee you that there is no way in hell my girlfriend will choose to kill the ducks. A less than zero percent chance.