We have learned that Gwendoline Christie has been cast in the upcoming live-action adaption of 'The Sandman' for Netflix.

It is currently unknown who Gwendoline Christie is playing in the series, but Desire and Death are yet to be cast, meaning she could be playing either of those characters.

Allan Heinberg is set to write and serve as showrunner on the 11-episode series. With a long career producing and writing staple television such as Grey’s Anatomy and The O.C. , comic readers also recognize his name as the creator of Marvel’s Young Avengers. He recently branched into film by writing the screenplay for Wonder Woman , sharing credit with DC maestro Zack Snyder.

I didn’t know they were doing this. Very ambitious.

I hope that showrunner is good. I am unfamiliar with his work.

No way that this translates well to the screen. Absolutely no way.

I sincerely hope she’s not Death because as fine a person as I think Christie is, her stature is like the exact opposite of Gaiman’s Death.

Looks like they’re going for mostly unknowns and/or Game of Thrones vets? There. A whole set of tweets written just before bed and set to go out when I'm fast asleep. I'm vaguely worried that I've mistimed them, but too late now. Here are the first seven members of the #Sandman cast to be announced officially. Seven down, hundreds to go. https://t.co/DksGLyMkBf 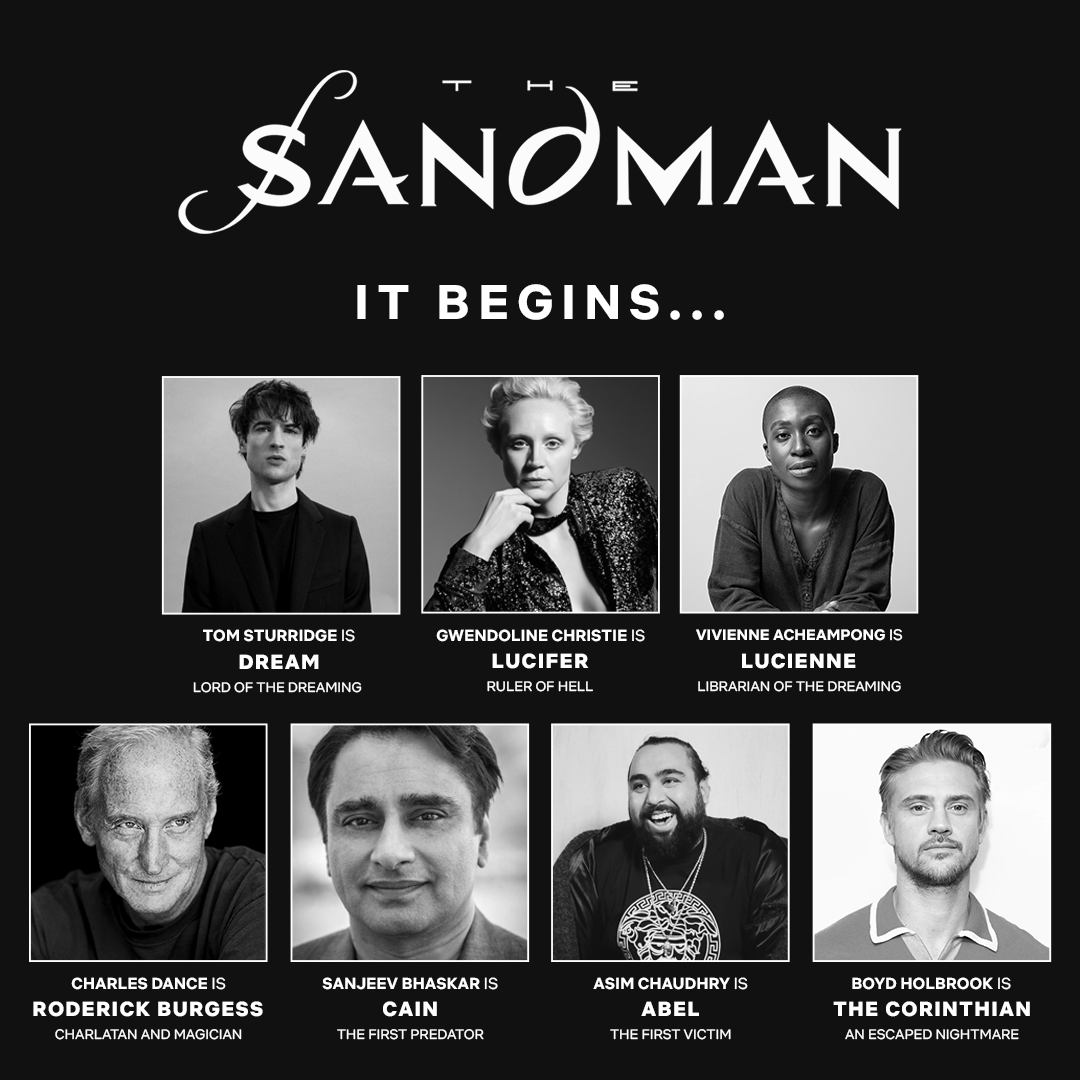 Not sure I’d call them unknowns. Sturridge is a big theatre actor as well has his film work, and Brits at least will recognise Chaudhry from People Just Do Nothing

I gotta say that I’m intrigued by the casting of Christie as Lucifer.

Also, I’m pleasantly surprised that Cain and Abel will make an appearance. I love the DC version of Cain and Abel in Moore’s Swamp Thing run and Gaiman’s Sandman. They took goofball horror host Elvira-type characters and made them into something a lot more compelling.

I don’t know the other actors, but Charles Dance as Burgess seems pretty spot on.

Christie as Lucifer is a very good choice. I have enjoyed Tom Ellis as Lucifer in the Lucifer TV show (which is VERY tenuously “inspired by” Gaiman’s Lucifer as later iterated by Mike Carey), but he is very much a “Hollywood” take on the role, and I can see Christie taking things in a different and interesting direction. Sturridge as Dream seems a solid choice. They do need to nail the casting of Death though.

Charles Dance as anybody is a good choice.

Christie as Lucifer is an interesting direction to go; I don’t recall having seen her in a “menacing” role before. But I’m looking forward to seeing what she does with it.

She could do a lot worse than imitate Tilda Swinton’s gender-bending turn as the angel Gabriel in the Keanu Reeves version of Constantine. Not that angels, fallen or swooping, have genders.

The gender of the character isn’t all that important, at least not to me.

But the character of Lucifer in the first couple Sandman books – and especially the first one – was this arrogant, casually powerful, godlike being. He’s mostly portrayed as a haughty monarch, using the royal “we” and looking down his nose on everyone… but with good reason. When Morpheus first meets him, he has to tread very carefully to avoid pissing him off while at the same time not being too obsequious.

That’s just not a role that I can personally picture Christie in, but again I’m looking forward to see her in action. Maybe they’ll have a different interpretation of the character, or maybe she can do “menacingly arrogant” well. Or maybe she’ll end up being a poor choice. Time will tell. 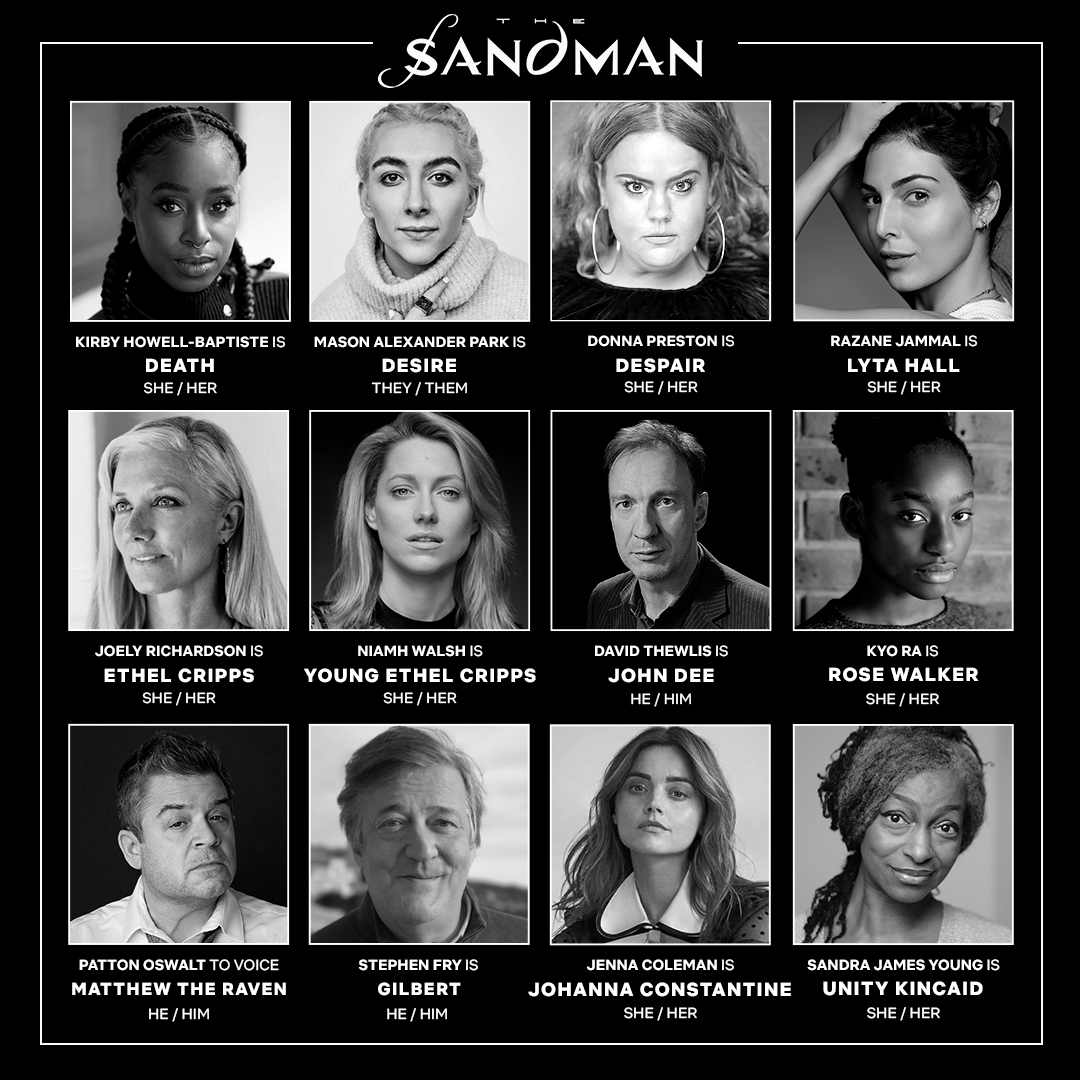 Gender swapped Constantine, eh? Interesting. Generally terrific casting, I’d say. Thewlis as John Dee, Fry as Gilbert, and Patton Oswalt as Matthew? Heck yes. And I wouldn’t have thought of Kirby Howell-Baptiste as Death (my biases showing, I suppose) but from her Good Place performance, absolutely the right energy. The only other one I’m familiar with is Joely Richardson and I don’t remember that character, but I’m down still.

Not a Dr Who fan then?

Johanna Constantine was an ancestor of John. She had a couple of issues in The Sandman, and even got her own graphic novel.

No, not a gender-swapped Constantine. Johanna Constantine appeared in the story Thermidor, Sandman #29, one of the single-story issues that were wedged in between longer story arcs (‘Season of Mists’ and ‘A game of You’ in this case). It was set during the French Revolution, and she is John’s ancestor.

Charmtrap beat me to it!

I’ve seen the first four or five seasons of new Who, but the fact that I don’t know what you’re talking about suggests not enough of one.