Satisfactory: 3D Factorio by the makers of Sanctum

Yeah, I think you’re right. And I don’t think that this game was ever trying to be the next Minecraft. I think it was (and still is) just trying to be 3D Factorio. My impressions from my limited play was that the environmental threats in Satisfactory are about the same as those in Factorio: somewhat annoying and a slight obstacle to progress that requires attention and upgrades to overcome, but not “difficult.”

I see the complaint that there’s no random map in Satisfactory and it has me scratching my head. I love bespoke maps, where the developer can take pains to make the landscape make sense and add in all sorts of interesting things to do and see. And in this genre, procedural generation puts hard constraints on the distribution of resource caches so that the created worlds are actually playable. A custom map allows developers to create interesting problems based around resource availability and ease of extraction. And I don’t know: No Man’s Sky’s worlds are neat for awhile, but ultimately start to look dull and samey and boring. I don’t expect to play Satisfactory for 100’s of hours. I will be more than satisfied with a single 50 hour playthrough. Who has time for anything else?

I think it was (and still is) just trying to be 3D Factorio.

Which, to be fair, is still pretty frickin’ awesome.

I loved this at launch, but I forced myself to put it back on the shelf until it’s out of early access.

I love bespoke maps, where the developer can take pains to make the landscape make sense and add in all sorts of interesting things to do and see.

I actually largely agree (particularly about the developer being able to plan progression), if not for two things:

The idea is that with a lot of mods, the mods could modify the terrain a lot. Of course it will fundamentally be the same world. I do not mean to imply that it will rise to the heights of mine-craft, however, with heavy modding it could get a tremendous amount of game-play.

I find that bespoke maps usually get boring quickly, they are not some lovingly, handmade work of genius but often little better than random maps, and are often just done out of laziness rather than put together a good procedural generator.

I literally cannot remember a game where I have ever said, “Gee, this handcrafted map is so awesome, I’m glad there’s no procedural generator.”

Fair, but the reason I put down Satisfactory until it’s more nearly done is because I came across two or three breathtaking vistas and didn’t want to spoil the rest of them in early access.

None of those are even remotely close to Satisfactory or any other sort of strategy game. You might as well listed movies and TV shows too.

Well, it’s relevant because it is relevant to me.

You have some weird bug up your ass about this and need to score internet points, so I’m done with you on it. Goodbye.

Really? Not GTA 5 or RDR 2? Not BotW? Not even a good Farming Sim map?

I seriously have no idea how you can talk about maps in games like Factorio and Satisfactory then make some comparison relating to Red Dead Redemption.

It’s almost like if someone were talking about Skyrim and you brought up tennis.

Fair, but the reason I put down Satisfactory until it’s more nearly done is because I came across two or three breathtaking vistas and didn’t want to spoil the rest of them in early access.

Spoiling a game in EA is something I’ve done too many times.

Well, there is a goal, in that you deliver more and more complex materials to your galactic overlords. These requests currently end at roughly the top of the tech tree, which is still being expanded.

As a goal-oriented gamer who usually plays to completion, I had no issues with this, and was happy to accept that I’d ‘completed’ the game, at least as it was at that stage of development. I didn’t feel unfulfilled, like I would if I couldn’t play the last mission of an action game, for example.

Edit: was a reply to lord kosc and previous posts

this is not usually what resource management gamers want out of a game. they want to continually upgrade and evolve their factory or network in some way. There is no reason to keep doing this in satisfactory, so your factory just falls to waste. it need an endgame loop to keep you playing. Factorio rockets and research system accomplish this. there are also mods to greatly extend the normal loop.

Point taken, and optimisation and extending the gameplay is great, but gaming is a broad church. I was happy to call Factorio complete when I launched the rocket, and I don’t see a huge difference between that, and whatever the last step currently is in Satisfactory.

I’ll go back to Factorio at some point to try out Bob and Angel’s mods, if they’re still around, but I’m happy to have ticked the ‘complete’ box for now.

I’m just trying to make the case that this game also offers something for completionists or those who seek closure, as well as the tinkerers and optimisers.

hah, i guess, i figure launching a rocket is actually just like finishing the tutorial for the game. the real game is in making mega factories and in doing bobs mods. after playing bobs mods, the base game felt way too fast, and all the interesting setups you can learn aren’t fully explored or utilized. Bobs is so long and complex that you’re forced to use every trick and organization tactic you used.

satisfactory has no mod support (its early access so i cant fault them too much), and once you research everything, your factory doesn’t have a purpose beyond looks. I guess I see your point, but I usually buy and play games that can be played and refined continually for many hundreds of hours. I do see it getting more like factorio over time, and there are many options for an end game in satisfactory… they could have it be something like oxygen not included where you have to explore other planets, or send supplies to other places via the space elevator etc.

Life’s too short. After watching Angel+Bob’s completely break Quill18, I realized there can be too much of a good thing. And then I found out about Cosmos2Cosmos, dear lord.

often little better than random maps, and are often just done out of laziness rather than put together a good procedural generator.

That’s a bit harsh, procedural generators (specifically for maps) are known serial-killers of otherwise good game ideas. But, yeah, some sort of randomness to the progression would increase my interest a fair bit (although I haven’t kept up much).

Yeah, it was exaggerated for effect in response to something silly.

to be fair, I don’t do it without some mods… like long reach, train logistics mods… but damn, once you get into it, nothing can beat the sheer madness of a bobs run.

Has anyone played the desert map? Not the experimental one, but the other one.
I started on it and then got to the level of coal. Then when I pinged coal, it was all super far away in other biomes. I even built a ramp, which took a good while, made it over some mountains, through radation and monster, and still it was then down the other side in a valley somewhere. Is there some coal spot I missed that didn’t require a huge effort to get to? I just ended up restarting into the grassy plains biome (the first one), because I know coal isn’t too hard to get there. 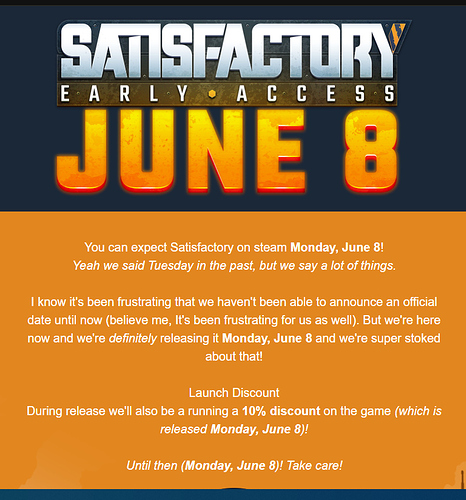 Yep live on Steam now, so is there an end game goal for this? Do you launch a rocket or what?