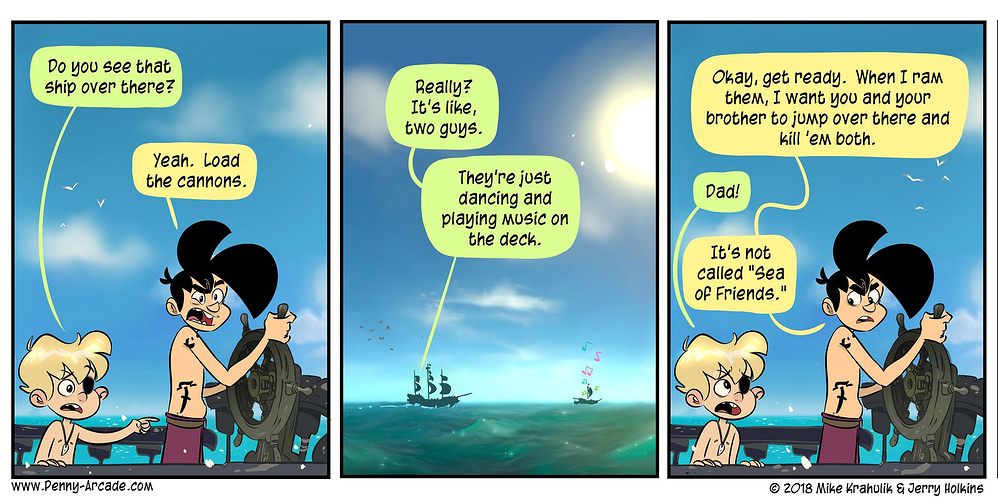 I finally decided to give this a whirl. Jumped in yesterday, have just run a handful of quests, mostly for the Merchant’s Alliance.

Thankfully I haven’t been griefed yet. I did have some kind of flaming skeleton ruin an otherwise peaceful voyage, setting my ship on fire and I took some damage trying to get away, so it’s burning and sinking and I catch on fire trying to get below deck to get water. Ultimately, I died twice and the ship sank, but other than that (and the fact that I can’t park worth a damn) it’s been pretty gentle.

Need to do some reading about how to angle the sales, and learn how to park. Got fully stuck once, ship wouldn’t move at all once I raised anchor again. 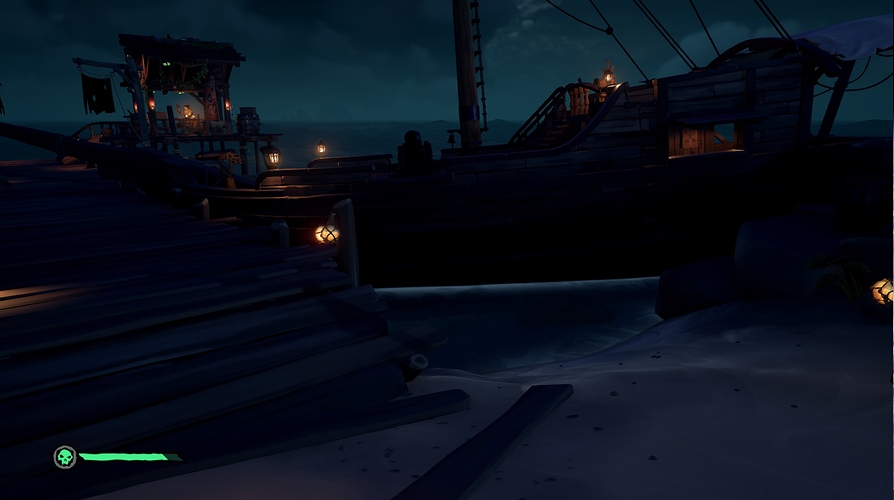 Don’t drop anchor. Learn to coast to a stop. If you raise sails just as the name of the island pops up on the screen or a few seconds after depending on the ship, you will be in the ballpark for coasting in. Just make sure your wheel is centered and your ship will generally stay put.
Failing that, if you have to drop anchor, center your wheel and then raise anchor before leaving the ship. If you get attacked while anchored you are pretty much screwed. Park in such away that your immediate forward progress will not be blocked (i.e. don’t park facing the island, park parallel or facing away from).

Edit to add:
Douse your lamps! No need to advertise.

You…don’t drop your anchor to stop? I am in awe of you already.

I’m not worried about being attacked (yet) because I’m just starting out and literally never have anything of any value, but I will definitely take the tips to heart and try to learn the right way, since I’m just learning anyway. Thanks!

I started playing last week with a couple friends; I suspect a bad grief will end the enthusiasm for the game, but we had a lot of fun the two evenings we played. We sunk our ship during both outings, just by ourselves. :p

Do skeletons shoot cannons at you?

I got a chicken-gathering quest (quite common for the Merchant’s Alliance) and headed to Crook’s Hollow, because I know they hang out there sometimes. I leave the boat (un-anchored – unmoored?) floating and head to shore with a coop. I find one of the three I need, coop him up, and take him back to my ship, but I am a LONG way around shore from where they are, so I decide to sail a little closer.

As I start getting into the area where I’m going to leave the boat, a cannon ball hits me! It’s coming from the island. I manage to get what appears to be outside of its range, patch up, and start firing my cannon back at where I imagine the cannon to be.

I can’t say for certain that I ever hit it, but I think I might’ve? Looks like an explosion in that area, and the cannon stops firing.

BUT, maybe it wasn’t a skeleton? I head ashore with a coop, but manage to not find another chicken that makes my list. Head back to the boat, and the chicken I had caught was gone, but there was an empty coop on my ship. Don’t think it’s where I left the chicken, though.

Did someone sneak on board, take my chicken, and leave me an empty coop?

I don’t know for sure what happened, but it was entertaining.

Yes. Skeletons can man cannons. You will learn to sail clear of some forts where cannonballs will be coming at you when you get close. It’s one of their many endearing qualities.

Did someone sneak on board, take my chicken, and leave me an empty coop?

My pig died when I forgot to feed it. :(

Turned into a tiny porkchop.

I had just caught the chicken, so it couldn’t have been that.

Nice that they turn into food, though.

Anchoring is fine on a sloop, it takes almost no time to raise it. Just make sure your ship is positioned to flee before you disembark.

Yes skeletons can shoot at you. They also spawn in ships that will chase you forever until you sink them. Megaladons can be deaggroed by getting near an island. Krakens can also be sailed away from its just really slow.

The biggest threat in the game is other players! You can try forming alliances, but alway be wary.

My pig died when I forgot to feed it. :(

Turned into a tiny porkchop

I have now had this happen as well. Twice actually.

You gotta really stay in feeding those little guys!

So thanks to Gamepass i’ve tried this game which i otherwise never would have even thought twice about. So let me try and be as-not wordy about my experience as possible.

Sort-of-aarrrggghh! (Pirates code? Clearly not)
Nice sailing mechanics: was this originally a sailboat sim?
Someone is jealous of the wave mechanics in recent ACreed games.
Why are the most prominent features in the sea (giant rocks you have to avoid) not on the map?
Getting there isn’t half the battle, it’s 9/10s.
Leveling and stuff feels much more meh.
Moments of adult beauty amid a sea of silliness, hilarious multihanded chaos, and not-for-me grind.

Call of the Sea with it’s painterly style actually looks better, but SoT is fun to sail around in, and its skeuomorphic control scheme is where all the fun lies.

The only persistent leveling is with faction reputation. That’s it, and it’s one of the best things about the game as far as I’m concerned. A few of my friends don’t get to play that often, but when they do, they’re at exactly the same level as the rest of us with the same gear. It’s liberating when you know you can all just jump in and get pirating together.

There are many different ways to get gold and increase faction reputation, not that you even have to worry about any of that anyway–it’s all cosmetic/prestige stuff. The core gameplay loop is simple, but the space between an empty hold, filling it with riches and then turning it all in is huge and exciting. Look at all the tales above. If you were just fighting skeletons and doing all the basic faction quests over and over again without event, then I can see how that might feel like grind, but a large part of Sea of Thieves’ appeal is not knowing where the PvE and PvP winds will take you. We often jump in with something in mind and then the whole plan goes sideways. The Tall Tales are brilliant too.

I think perhaps my biggest issue with Sea of Thieves is that the pirate-to-pirate swordfighting and gunplay (still) feels totally off to me and my friends. We’ve been playing for hundreds of hours now (with some Arena under our belt too) and we all mostly suck at it. I’m no slouch with FPS games either. I land most shots but other pirates always seem to last longer and drop me faster. Not to mention the bunny hopping is bullshit. Maybe it’s a healing fail on my part. I know the blunderbuss’ damage is a crapshoot so I roll with the pistol these days. We’re pretty damn good with ship combat but boarding is almost always our undoing.

I’d like to see a Sea of Thieves sequel with Rare consulting with a studio like id Software on the combat feel. Or even a “Sea of Thieves v2.0” that vastly replaces components of the game, while letting people continue with their characters.

My big thing is I’d like to see more customization and variation to the ship combat. Let people configure their ships at a shipwright, such as moving cannons around (ie. fore and aft cannons, at the expense of broadside), battering rams, various states of armor/reinforcement, and so on. Maybe you can make an iron plated behemoth with a ram, but as a result it’s extremely slow to maneuver and get moving. Maybe you can ditch cannons for more speed. Maybe you can add harpoon guns to the crow’s nest, that people can fire at nearby ships and then use their sword on the attached rope to slide over and board quickly.

Everyone would still have access to this stuff, so it would be a level playing field - but one with more unique variability.

I also wish they’d add complete cosmetic conversions for the boats themselves - so you could buy (with gold) fancy upgrades that give you more opulent railings, or more expensive wood, or gold gilding - stuff like that. Maybe make it so only pirate legends get access to that stuff, and make it modular so people really can make their own unique looking ships.

Yeah, my most played game on Steam is Guns of Icarus Online which has a lot of that stuff (minus boarding) so I can definitely see the appeal. I also adore Hunt: Showdown which has a similar melee and slow ranged weapon dynamic to Sea of Thieves, but it feels fantastic. If I could have those two games mashed together…

Apparently they added a performance mode to this game on the new Series consoles that lets you play at 120Hz at 1080p.

Played a session last night, perhaps the first since the new season thing. It was about 11pm and we needed to finish this Tall Tale off that we’d been chipping away at for the last few sessions. One friend with newborn and hugely sleep deprived, the other ravaged by work, so they were both flagging big time. No recent checkpoint and we were being pursued by some reapers. We tried losing them in a storm and failed.

At that point we knew we’d have to face them so spun round, kept the speed up and pummelled them with cannonballs, narrowly avoiding a ram and going fast enough to dodge boarding. That slowed them down. My friend suggested using some of the gunpowder barrels we had in the crow’s nest (four barrels!). Ram, board and boom. Why not. I was getting impatient so hopped off early and gambled on a long swim board on a full sail brig. Somehow, without really being able to see the ship through the surface of the water, I caught the ladder!

I ran past the crew, into the hold, lit the fuse and placed it at the back of the ship. The explosion killed a crew member on deck. I killed another just below and the helmsman was in shock, flailing around, so I finished him off too. I stole their wood, nabbed some fruit and went down with the ship. I may have given them some family friendly shit over voice chat. Definitely one of my finest plays.

I will say the season thing was quite annoying in that I was constantly being told I’d levelled my banana eating up or whatever, and my renown had increased. You know as I said you don’t have to grind in Sea of Thieves? Well that kind of thing makes me feel like I’m grinding and I don’t like it. The HUD overlays are quite distracting too when things get hot. I wonder if all that can be hidden?