Sean Spicer is the best Press Secretary in history. PERIOD.

I thought that someone ending up on Dancing with the Stars meant the boycott worked.

I’m boycotting it, but the boycott is incidental rather than intentional.

But now I’m not watching it because I’m boycotting it. So yeah, the boycott is working.

Hahahahaha me too! What a dumb show.

8 million people watched it last year. I take it a given not many people here are watching it, but a boycott is aimed at viewers who might not want to normalise Spicer and the administration, not people who don’t watch it.

When was the last time a boycott really worked in America? We talk about them a lot, but they seem like more, shall we say, virtue signalling, than actually effective tools to speak to corporations.

I think “America”, as a single relatively monolithic cultural market, might just be too large for boycotts on any particular issue to be effective, as the proportion of people concerned about issue X and aware of the boycott compared to the total people who consume a product is just too small a percentage. Either because of inefficient communication, or diversity of interest in any given issue X in the market.

When was the last time a boycott really worked in America?

When was the last time a boycott really worked in America? We talk about them a lot, but they seem like more, shall we say, virtue signalling, than actually effective tools to speak to corporations.

Most US boycotts are mostly tools to influence public opinion against the company or policy rather than a serious threat to the economic interests of the company.

For instance, the Civil Rights movement’s boycotting the Montgomery City buses succeeded due to the intense public attention and protests, not because the boycott hit the city’s wallet hard.

I guess if I had to point to a recent case in the the US where economic harm by a boycott caused a reversal, I’d probably point to North Carolina’s HB2 fiasco in 2016. The boycotts by other states, movie studios, TV studios, the NBA and most especially the NCAA certainly inflicted a huge amount of monetary harm on the state… something like $3.5B worth. But even in that case it might have been more the criticism than the hit to the NC pocketbook.

I thought that someone ending up on Dancing with the Stars meant the boycott worked.

On the other hand, Rick “Whoops” Perry is now Energy Secretary.

When was the last time a boycott really worked in America?

Hell, Harry’s razor cartridges come with 5 blades, so that Onion article has lost its timeliness, hasn’t it?

I get a giggle about Harry’s because I hear the guy on the commercial all the time on satellite radio.

Like, how many of the commercials have founders that name their company completely different names than theirs? Apparently a lot.

And yep, they all make 5 blades now it seems.

I feel like a shaving technology Luddite. I shave with only two blades.

I went electric (for about the third time in my life) and haven’t looked at blades for several years now. I don’t miss $20 for a 4-pack of blades.

It’s not that bad. Ever since Gillette introduced the Mach 3 Turbo, the green handle one where the blade vibrates, which not only allows for a close shave, it dislodges the hair from the blade afterward, so the blades last forever now. One four-pack lasts me about 9-12 months now, where before the Turbo vibration the same blades used to last me three weeks at most. It’s been amazing. The money I’ve saved since the Mach 3 Turbo came out has been substantial. And since the Mach 3 Turbo blades are not even the latest from Gillette (I think they went on to introduce the Fusion? I haven’t tried it), they don’t even cost as much anymore either. $12-$15 worth of blades last about a year. (Incidentally, this is why Dollar shave club sounds so expensive - $1 a day? I spend about $1 a month at most).

Hrm, I’ve not tried those at all (the vibrating razor.) I’ll have to give them a try. I have old Fusion razor bases, and at least around here a 4 pack runs a little less than $20 if not on discount for some reason. I did try Dollar Shave for a while. It didn’t take. Their blades seemed more dull and went even duller quicker than Gillette. I have not tried Harry’s.

Not to derail the derail because lord knows this thread has served its main purpose and hopefully will be consigned eventually to the dustbin archives - but there is a long shaving thread for anyone who is interested:

Shaving Technologies Everything else

I am considering purchasing an electric razor for my son, but I’ve never used one. Can anyone recommend a decent electric razor? He has acne that gets worse when he gets stressed out. When he gets an outbreak, shaving irritates his skin. He uses a 3 blade razor. He has gotten some relief by changing the direction he shaves. I think an electric might be even better because they can’t get as close as a blade. Any other suggestions that I haven’t thought of? I know there is that bad smelling no … 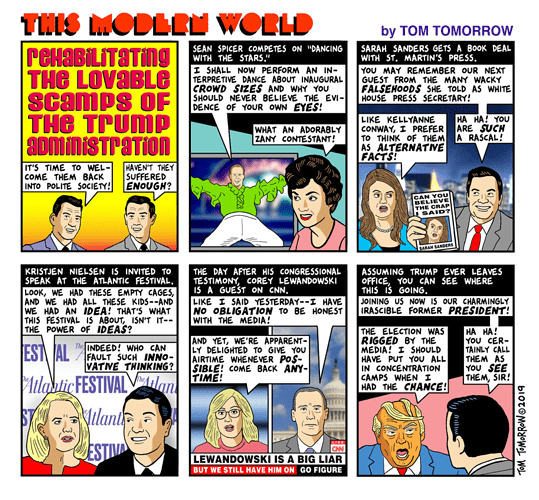 Its true that he had no idea what the dept did when he took the job, but at least hes not selling the nukes to the highest bidder to line his own pockets like so many of the rest of trumps cabinet.

For this administration, hes been wildly successful, as far as i know. such a sorry state of affairs indeed when rick perry is your shining star of success.