Let’s play Secret Hitler, a social deduction game in the vein of Resistance/Avalon/Mafia/Werewolf, for 5-10 players.

At the beginning of the game, each player is secretly assigned, by PM, to one of three roles: Liberal, Fascist, or Hitler. The Liberals have a majority, but they don’t know for sure who anyone is; Fascists must resort to secrecy and sabotage to accomplish their goals. Hitler plays for the Fascist team, and the Fascists know Hitler’s identity from the outset, but Hitler doesn’t know the Fascists and must work to figure them out.

Whenever a Fascist Policy is enacted, the government becomes more powerful, and the President is granted a single-use power which must be used before the next round can begin. It doesn’t matter what team the President is on; in fact, even Liberal players might be tempted to enact a Fascist policy to gain new powers.

Secret Hitler is played in rounds. Each round has an Election to form a government, a Legislative Session to enact a new Policy, and an Executive Action to exercise government power.

From the time I announce in-thread that the Legislative Session has begun, until the Chancellor announces the chosen Policy, neither President nor Chancellor may say anything in-thread.

If there are fewer than three tiles remaining in the Policy Deck at the end of a Legislative Session, they will be shuffled together with the discards to form a new Policy Deck.

At the start of the game, there are 11 Fascist Policies and 6 Liberal Policies in the deck. As Policies are enacted, they are removed from play, shifting the odds of drawing each type.

If the government enacted a Fascist Policy, the sitting President gets to use that power, and the Executive Action phase will be played.

The President chooses a player to investigate, by formally announcing: “I formally investigate [player name]”. I will send a PM to the President with the loyalty of the player, either Liberal of Fascist. Hitler will be reported as Fascist, with no mention of the special role.

The President may share (or lie about!) the results of the investigation at their discretion. No player may be investigated twice in the same game.

If the President passes the presidency to the next player in the rotation, that player would get to run for President twice in a row: once for the Special Election and once for their normal shift in the Presidential rotation.

The President executes one player by announcing “I formally execute [player name]”. If that player is Hitler, the game ends in a Liberal victory. Otherwise, the game continues, and there will not be any announcement on whether the executed player was a Liberal of Fascist; players must work out for themselves the new balance of power. Executed players are removed from the game, and may not post, vote or run for office.

The Veto power is a special rule that comes into effect after five fascist policies have been enacted. For all Legislative Sessions after the fifth Fascist Policy is enacted, the Executive branch gains a permanent new ability to discard all three Policy tiles if both the Chancellor and the President agree.

Each use of the Veto power represents an inactive government and advances the Election Tracker by one.

Here is a link to the rules PDF: Secret_Hitler_Rules.pdf

This Forum adaptation of the rules is also released under the same license. The only changes are to allow for a moderator to handle secret communication and passing of policies through forum PM.

The randomized order of play is:

This looks fun, I would love to play but have no prior experience with these forum games. Would I need to print anything out or anything else?

I had a chance to play this last week, but only with six. Which felt like about four too few. I feel like it might not come into its own until you get at least, say, eight people in there. But still, what a cool variation on the Resistance model. I look forward to following this thread!

No, no need for printing anything. I will moderate and keep track of the rules and procedures.

Count me in. I love these types of games, although I’m not sure how they play out on a forum as far as the face-to-face people dynamics are concerned.

All right, I need some time to prepare and write up the rules. Should be sending out roles within the next 24 hours. Prepare your Hitler memes in the meantime. 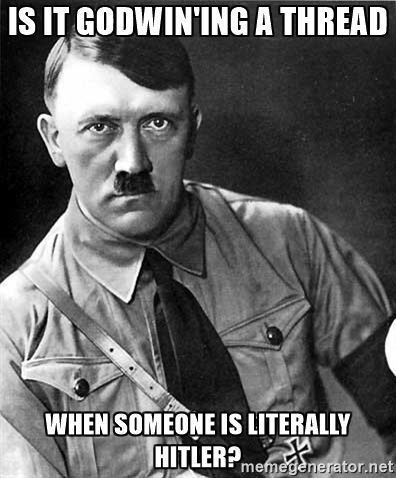 How many laws need to be passed to access the airlock?

This will be an interesting read.

How many laws need to be passed to access the airlock?

Finished editing the rules document, and have randomized the player order. Expect to get a PM with your role in about 4 hours from this post, and then we may commence the accusations.

Am I doing it right?

Vote on the governmentOnce the Presidential Candidate has chosen an eligible Chancellor Candidate, players may discuss the proposed government until everyone is ready to vote. Every player, including the Candidates, votes on the proposed government, by sending a PM with “Ja” or “Nein” (“Yes” or “No” if you prefer) to @jostly. Once I have received everyone’s votes, I will announce the result.

When you announce the result, do you also announce how each person voted?

Am I doing it right?

We won’t know until the part of the game where I execute you ;)

When you announce the result, do you also announce how each person voted?

Yes! Thanks for pointing that out.