Well done! Was he harder than demon of hatred? Booted the game up few nights ago and promptly died to the first two pip enemy 🤓

Hard to say as they are totally different. Demon of Hatred is a “dark souls” boss that doesn’t belong in Sekiro, as you have to deplete his health in full x3, which makes him hard. No viable posture damage death blows. The thing though is as long as you’re close to him he can’t really do much. Problem is his dash and general penchant for trying to create distance from you so he can wreck you with fireballs and shit. Demon has one super weakness though. Malcontent ring can stun him three times during the fight. I try to save all three for the phase 3. You still have to work the last quarter of his health.

Both are endurance fights where you have to outlast them, but the last boss is much more complicated and is a Sekiro boss proper where you want to focus on posture damage. The size of their health bar doesn’t really matter. The first phase is basically the fourth phase of a previous boss you fought in the mid-game, with three more phases against the “real boss”. It is just fucking hard and knowing that there are 4 phases can be demoralizing if you keep dying in phase 1 & 2 like me.

It took me a really long time to figure out phase 2. According to the wiki phase 3 is harder, but I didn’t have as much trouble with it. Maybe just my combat style. Fourth phase I actually played the least, but it’s similar to his third phase + the lightning reversal mechanic which is a unique mechanic in this game you just need to learn. If you’re good at it, it actually makes the fourth phase a lot easier as you can stun the boss for a ton of posture and follow up with additional attack. It’s basically free if the boss keeps doing lightning attacks. That said, rice or shaved snow during the fourth phase was the MVP for me. I didn’t worry about healing and just focused on taking him down since I had health regen on steroids being hopped up on that stuff from the child of rejuvenation who already ate two serpent hearts.

As an aside I tried the DLC boss rush thing that becomes unlocked after finishing the game. (seems silly because there is already an option to re-fight any boss)

I beat the horsemen easily but Lady Butterfly still kicked my ass. Seriously, what the hell!

Since I don’t plan on replaying the game I watched all the other endings on Youtube. I definitely got the weird ending that opens the game up for a sequel. Blah! I definitely prefer the ending where Sekiro kills himself to save Kuro. Way better.

Thanks all for the words of encouragement during my struggles. I really appreciate it. And sorry for spamming this thread non-stop. I guess I can move on to Elden Ring now. (not without an interim palate cleanser hmmm)

Way to go, roguefrog! Our awe and respect is your achievement. Verily, your ancestors are smiling down upon you this day. They’re singing tales of your glory in Valhalla or wherever.

P.S. I never believed you when you said ‘I quit.’

For perspective, this game took me much longer to beat than Dark Souls 2 + All DLCs.

A whole lot of dying to bosses (AND mini-bosses!) over and over again. Dozens upon dozen of times. Lady Butterfly alone probably has an easy kill count of 60 on me.

Thanks all for the words of encouragement during my struggles. I really appreciate it. And sorry for spamming this thread non-stop.

Thank you for sharing! I really love reading people going through these games. Ever since I picked up Dark Souls in 2019 I just want to relive those first magic from playthroughs

After not playing for much of last week, I made what I consider decent progress this Saturday and Sunday. I got past the second Samurai General mini-boss way quicker than the first (3-4 deaths vs 10+); I beat the Shinobi Hunter; I took out the the Drunkard with the help of the NPC standing nearby.

Now I have two options: A giant snake who has killed me twice already or the infamous Lady Butterfly, who wrecked me to end my weekend last night. I think I’m choosing the snake.

Lady Butterfly alone probably has an easy kill count of 60 on me.

Yep. Seems like that’s my likely result as well. So the snake it is!

I still don’t feel like I’m playing this game right. I’m way more lucky than I am skilled. And I’m sneak-killing everyone I can because that’s the only way I survive. But progress is rewarding nonetheless.

The real Sekiro starts at Lady Butterfly. (but not if Shinobi Hunter has anything to do with it!)

That said, I would suggest going forward with that snake and the next area, then return to the old hag after.

I of course didn’t do this, to achieve my truly spectacular results.

I got past the guy on horseback after I upgraded my prosthetic arts to allow for attack. He wasn’t that bad after all.

Then a little bit later a flaming bull f’d me up. So I’m back in the same situation of bosses on either side. Butterfly time? I’m kinda scared to face her.

Butterfly is still harder than flaming bull, which only has one health bar. My tactics: You can run around and kite it forever, get in 1 attack or 2 when it hits a wall or snag, and stun it for extra attacks with firecrackers. Although you can’t spam them and have to wait like 20 seconds after use for the stun to work. Hitting the bull’s head deals more damage than its body.

I started NG+ because dammit fuck me of course I did. What an idiot.

And no I didn’t give up Kuro’s charm (NG+ item which if given away means you take chip damage from blocking for more XP. You have to deflect or you are damaged!) but I probably should have because you can always reclaim it later after the fact. For the good news I’ve cleared all bosses first try up to before Fountainhead Palace except for Genichiro and Owl Great Shinobi. Both took several tries. Owl significantly more so. Enough to spread dragonrot around. That fight is still very difficult. I thought I would die to Lady Butterfly and the two Ape fights but somehow pulled through one-off.

But now I got to the secret hidden boss I missed the first go-around…and it’s so difficult, and I’m not sure if NG+ helps or just makes it worse. At least we got more dragonrot! 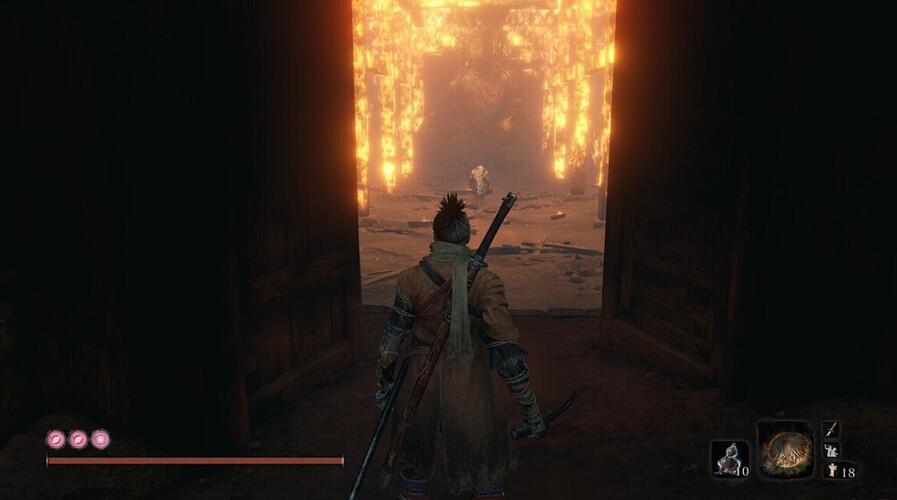 This feels like a very similar character arc to what I went through. I don’t recall if I thought the charm was actually “worth” playing with in the end or if it just pissed me off for very little sense of achievement. I’d have to go to my old posts.

I guess I feel like I haven’t truly finished a FromSoft game until I’ve beaten it a second time.

With Sekiro it is crazy fast to blast through areas. Skip. Skip. Skip all the things. STOP: Boss/Required mini-boss. And a few of them are total blockers!

Dark Souls only really had one. O&S. The rest, not so much. Going through the level was harder but I can’t think of another boss that took 50+ attempts over multiple sessions.

P.S. Also getting royally fucked in the ass for not getting the end game achievements (thanks Steam!) is AN actual motivation for plaything through this nightmare again! I want my achievement Steam you fuck! As petty as it is, this pisses me off.

Dark Souls only really had one. O&S. The rest, not so much. Going through the level was harder but I can’t think of another boss that took 50+ attempts over multiple sessions.

Interesting. O & S were hard, but for me, way easier than the damn Four Kings.

And Owl Father is done. Only bosses I didn’t beat are part of the bad/early ending. I don’t have the heart to fight and kill Emma-chan.

After 100 hours of game time I finally have arrived. My third eye is wide open.

All the bosses and mini-bosses have become manageable. I can even toy with them to certain extents. (but that is the kind of hubris that will get me killed for sure)

P.S. The game is still harder than the rest in terms of bosses, mini-bosses, common street toughs (skippable)

100 hours in Dark Souls still saw me as a mewling babe :( 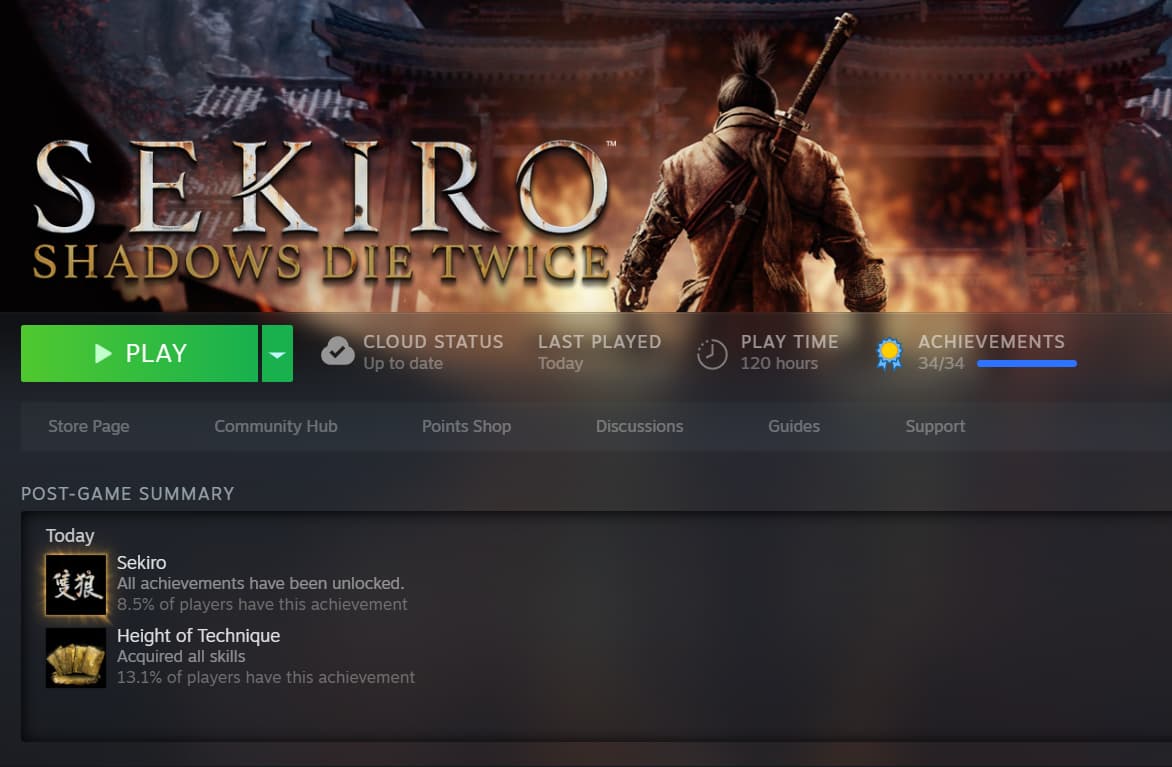 During my NG++++ playthrough, I only died to death once. Armored Warrior for some reason. Never died on him ever before in any of the previous runs. (maybe because I tried to light him on fire) The funny thing is I never learned how to cure dragon rot this playthrough, but I never needed to because I never died again. Also the Sculptor while auto-dragon-rotted on the first death gets auto-cured when I progressed the purification sub-plot.

Anyways, I am going to move on.