I’m diving into this again and LOVING it. Understanding that I have to stand toe to toe and trade blows–not dodge like a Souls game–is game-changing, and essential.

In 3 different attempts to play, each about 3 months apart, I’ve never beaten Lady Butterfly. This morning I did so on my first attempt of the day (having wailed on her for an hour and more over the last two nights) thanks to the help of this Youtuber, SoloVG. His Lady Butterfly Video is easily the best description of how to play the game, and how to approach this fight, that I’ve seen. I looked at a lot of ‘guides’ on how to beat her, and his is far and away the best.

I’ve always liked the exploration and combat puzzle aspect of FROM games more than the boss fights, so not being able to summon someone for help with one that’s giving me fits has held me back from fully loving Sekiro. SoloVG’s videos help bridge the gap in a lovely way. I’ve taken down Lady Butterfly, Seven Ashina Spears, and the Lone Shadow Longswordsman (Pit Guy) this morning without too much trouble, and it feels great. I’m still executing the fight and playing like a badass, but I’m not having to analyse the game in a way that doesn’t work that well for my brain.

Anyway, onward to the Ashina Depths, and upwards to Genichiro!

I give Sekiro 4 ninja shinobi stars out of 5.

It’s mostly genius, but it is uncompromising, i.e., dis shit is hard so git gud. I think it’s the hardest of all the Souls games, IMO.

This is on sale at GMG right now for $36, which is not a historical low but not that far from one, and it seems like now is a good time to git gud, so I’m really contemplating it…

Ok, lads, I finally got this one. Excited to try it out. I was like, “should I replay Bloodborne, should I replay DS3,” then I remembered there was a FROM game I hadn’t played yet and that Steam wallet money wasn’t going anywhere…

A first playthrough, eh? You’re in for a real treat then, in my opinion.

Really different from the other From games, but in a lot of ways the most polished experience they’ve put together. An absolute blast.

Movement is much easier in this game than any other of theirs I’ve played. I have a much easier time exiting sticky situations, giving me an incentive to play around with how I approach groups of enemies to find a good way to pick them apart.

I’ve advanced in the first area up as far as the guy and his mom, then I went back to the temple and popped off to burning Hirata, wandering around there for a bit, killing everybody and finding a couple of shinobi tools, but that’s as far as I’ve gone so far.

Two hours in, and I have yet to die. Astonishing. pretty sure I died five times in the first half hour of Bloodborne.

You’re supposed to be a ninja, and I have done an awful lot of sneaking around, but it strikes me as odd that nobody gives a shit about dead bodies unless they see you kill them right in front of them. Feels like they ought to raise an alarm if they come across someone’s corpse, especially someone who they just saw alive like a minute ago.

Nicely done! I’m pretty sure I died in the tutorial area… :)

I guess I did get my arm cut off. Does that count?

Ha, I just watched this, because I wondered: 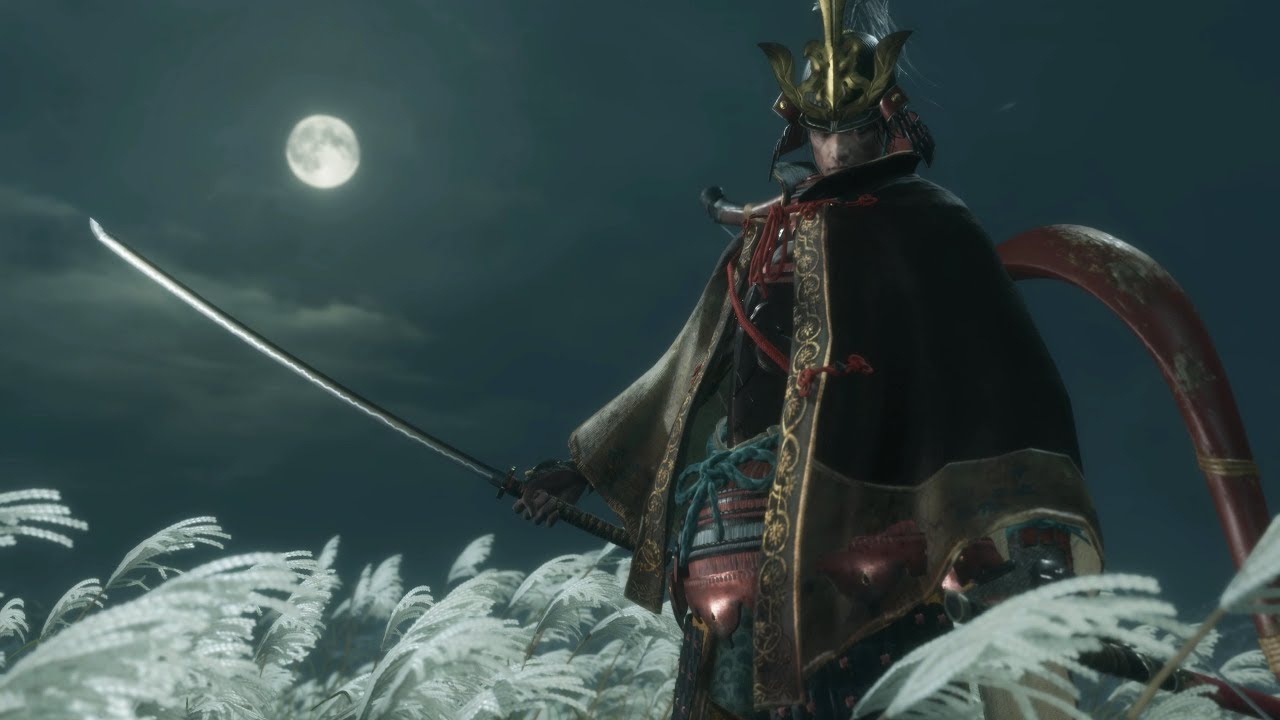 But who was shuriken???

I was extremely confused by that voice actor, then I remembered I must’ve used Japanese voiceovers.

Yeah, the game sets itself to Japanese audio automatically, and frankly I would not even consider changing it to English…

…well, except for THIS GUY.

I forgot to keep myself spoiler free for a minute.

Spoiler:. Unlike Bloodborne, you can block in this one! Since the main character never has a shield I had always assumed you couldn’t.

Not only can you, you pretty much have to!

I’ve kept myself pretty spoiler free for this one, too, mostly.

Ok, I died. That guy with the jumonji yari is pretty tough.

Edit: Jeez, this guy represents just a tremendous difficulty jump. Maybe I ought to go a different way for now…

Edit 2: I went back to Ashina to see what was what beyond the guy and his mom, and ran into the red eyed ogre. Thankfully I’ve been talking and listening to everyone and everything, so I had a decent idea what to do and I only needed two bites at the apple. Used all my oil, though.

The game has many gate keepers in terms of difficulty. You’ll need to master the mechanics to get past them.

Kept going in Ashina, found a shortcut, had a knock down, drag out fight with General Tanzen Yamauchi but prevailed (he’s way easier than the spear guy, just so much less aggressive), and found something in a dark cave that instinct (and a posted note) told me not to fuck with right now. Well, maybe now that I’ve put down the general and progress along this path seems to be blocked; although I can see more area, I can’t figure out how to reach it.

Edit: ok, the cave was a bad idea for sure. The shinobi hunter is just so damn aggressive, and his 危 attacks…are they ALL counterable with mikiri or just one of them? The windows on the windups are quite small.

Edit 2: Woo, got past the shinobi hunter, although I don’t think I landed a single mikiri counter to do it. Wait, no I did get one, but I didn’t posture break him, just wore down his health.

Edit 3: Oh ho, Hirata is not the only way forward, I simply missed a downward path. Although my reception that way was not very friendly…

I like these reminders of how horrible I am at these games, but I enjoy them so persistence counts. I look forward to hearing your experience in some of the fights that I died 1000 times on.

I can’t wait until I’ve forgotten enough of Sekiro to play it again. Or even better, they come out with a second one.