I’m an idiot! I tried to “move” into combat like a ground unit. Air units have different recon and strike commands. Phew! Now it’s time to introduce these cat-dinos to some napalm.

My first test game, the planet had 4m tall land crabs that apparently were nutritious and delicious. I was wondering if the folks there had a recipe for cheddar biscuits passed down from the days of yore.

Cool! All my games have been test games so far. I’m playing pretty much in baby mode until I understand the mechanics well enough to manipulate them. The funny thing is it’s still challenging. This game my peeps have starved, been diseased, enslaved, eaten by monsters and even worse, rebelled while all these troubles were going down.

Silly things I’ve learned:
Pick a faction you can live with and pick and groom your leaders to fit. Seem obvious but difficult in practice. Get Interior soon for those leader cards.

Don’t chase the worker vs private salary mechanic. When you overbuild you steal people from the private sector. This seems to drive up their wages. When workers are paid less than private they get pissy. So I would raise worker wages. The game hounds you to do so. I almost went broke doing this. Its better to slow building down and allow the economy to settle back out. Once the civies get their workforce back then their pay comes down.

Free folk towns can make or break you and not just the perks. Without their population your cities may not grow. One game I was enlisting more soldiers that the natural population growth could support.

And bunch of other dumb stuff that’s probably wrong.

I’ve been playing around, trying to figure things out with some test games, reading the manual, and watching youtube videos by Das Tactic, TortugaPower, Edmon, and Saros. Seems to be a lot of material out there to help learn the ropes. I need to look at the relieving of leaders and moving folks around before I move on to my next game. I think the problem I’m having with no airplane as yet, is the guy running the air force research council sucks. It looks like a city is automatically created when you create a new zone so I’m not sure yet what the colonize button is about, I guess maybe similar to migration in MOO.

It was fun dealing with the slavers. There is a fairly extensive mountain range in the west of my initial zone, and they were coming from there. So my initial regular units were fighting them and pushing them back through the mountains. Then I eventually ended up with a battalion of mechanized infantry with a new apc we developed, and started churning out some independent light tank battalions. We found spot to the south where we could get around the mountains and into the plains that were behind them and then finished them off fairly quickly.

It looks like a city is automatically created when you create a new zone so I’m not sure yet what the colonize button is about, I guess maybe similar to migration in MOO.

Yeah, you can send colonists to a zone of your choosing to boost the population in your low level cities. The big limiter with sending colonists is that it uses logistics points to do it, so you need to have spare capacity on the roads to the zone.

So my initial regular units were fighting them and pushing them back through the mountains. Then I eventually ended up with a battalion of mechanized infantry with a new apc we developed, and started churning out some independent light tank battalions. We found spot to the south where we could get around the mountains and into the plains that were behind them and then finished them off fairly quickly.

One of my favorite things about this game is just how impactful terrain is. Mountains are a huge limiter to everything, but you can always try to send infantry through and hope you can get them back into supply on the other side. It’s expensive to build roads through the mountains, but doable. I had a war with an AI faction that they started and captured a couple border towns early. However, I turned the tide and very slowly pushed them back. About halfway through the war a bunch of enemy tanks started pouring in from our southern border which had totally been blocked off by a large mountain range. Turns out the AI had built a road through the mountains in order to open up a new front.

I ended up building a road through the area we found to the south. It was forested low mountain, with high mountains to either side. I was sticking supply bases along the road to try and keep everyone supplied. I think I stuck a truck station in as well, and that is where the city is in the new zone.

Does the AI play under the same manpower and logistics constraints as the player?

The part about building roads thru mountains made me wonder.

From section 5.18 of the manual. So yes, it looks like the road through the mountains was possibly free for the AI. 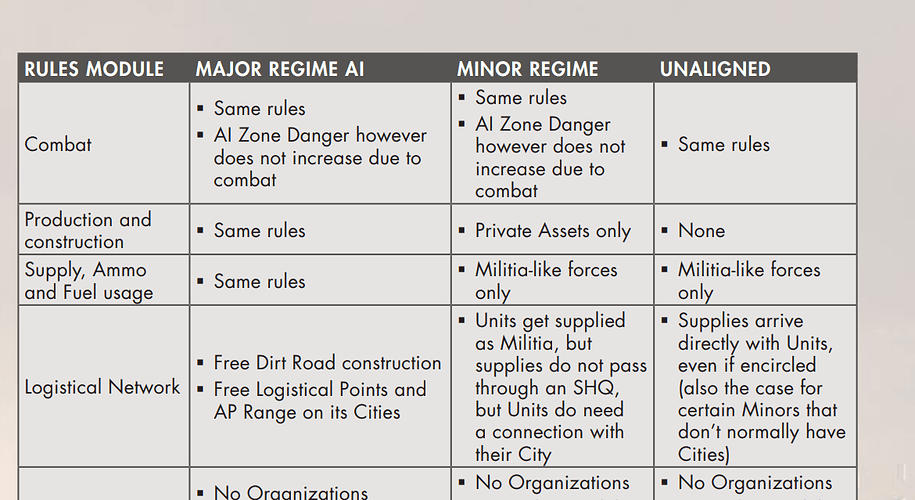 I’m trying to make up my mind whether or not to pick this up in the current sale, but have reached an impasse. That perhaps you can help with!

What it boils down to is; I abhor poor game UI. While I’d certainly categorise Shadow Empire’s as ugly (which I am willing to overlook), I haven’t been able to determine one way or the other where it lands on actual usability, though an almost 400(?) page manual seems a pretty big red flag here.

Appreciate the question will be a bit vague so to try and give some reference to where I stand; I loved Alpha Centauri back in the day but consider Distant Worlds Universe my number 2 all-time regret buy for games. I bailed on Unity of Command due to UI woes but it also wasn’t really my bag either.

So… whereabouts does it stand, really?

I love this game so much I recolored the UI. If you’re wondering how easy it is to do shit, uh, it’s not great, but then again, there are a lot of tiny details that need digging into. As for me, I HATE all that white, and the typewriter font. I actually went and looked at his other WWII realistic games, and the UI looks more like a ‘space game’ than this does.

What it boils down to is; I abhor poor game UI. While I’d certainly categorise Shadow Empire’s as ugly (which I am willing to overlook), I haven’t been able to determine one way or the other where it lands on actual usability, though an almost 400(?) page manual seems a pretty big red flag here.

It’s functional but far from good. I’ll say, it’s pretty good about letting you dig into various numbers to see everything that went into the calculation up to a point. At some point the tooltips don’t really describe certain thing so you’re left referencing the manual. The UX for designing units is atrocious and designing air units can be downright painful. He clearly put work into the views for the logistics flow and I’d paint that as a bright spot considering how complex the logistics can be.

Hmm, this is a fabulous game, but the UI is indeed a mixed bag. It helps to read the manual. I’d say “buy it on Steam and try for 2 hours,” but I don’t think two hours is enough to learn the game well enough to appreciate its magnificence. I’d say if you didn’t like the Distant Worlds UI, you’re not going to like this either.

Personally, I love both DW and this game. Shadow Empire was my Game of the Year for 2020.

After 30 hours of playing the UI has disappeared for me. It works fine. I can click 1 or 2 times and get any info I need. Sure, the layout is strange - why is this info in the report menu and this other info under the management tab? But it gets the job done.

Check out the UI color mod: 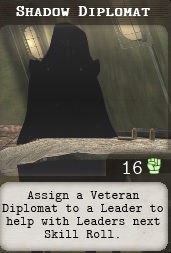 I couldn’t figure out what this card did until I saw Tom’s review where he states:

Are you worried that your covert ops leader doesn’t have the skill to make the roll that determines whether Spy Ring succeeds? Then first play the Shadow Spy card to give him a +40 to his next roll

So this card is to be executed by the secret service council but I don’t have that council yet. In fact I always get this card early in the game and I was wondering if should keep it for later or scrap it altogether.

Thanks for the replies. I’ll defer for now since I am lacking in time to do the “2 hour demo” thing but will keep it on my wishlist for future sales.

It’s not specifically for the Secret Service council, that was just Tom’s example. You can use it for any leader. You can use it for a governor for revolt events for instance. Or for the foreign council leader when playing an Annexation card on a minor regime. It’s a pretty powerful card.

I just released the first version of my Stratagems Artpack Project Mod for #shadowempire game! You can grab it here for free! (but some ko-fi are welcome if you can support me in such projects! Thank you!) ko-fi.com/s/61e0be8c4d @VRdesigns @SlitherineGames @Matrix_Wargames

Are they new cards, or new art for existing cards?

Have not downloaded yet, but they look really nice from the thumbnail. Thanks for posting this, Shards.