Beta 1.10 brings a lot of changes. You can subscribe to it via Steam (or copy into the Matrix install). My quick paste of the biggest changes:

It will release in Jan. And the developer is teasing Navies on his official website.

Great news, looking forward to sinking some time into this over the winter

I hope the naval stuff is true. I know it won out in the polling he did but it also seemed like he didn’t really want to do it. Either way, I like the changes in this patch and look forward to more content coming!

Great news, looking forward to sinking some time into this over the winter

I’ll give Shadow another shot after it releases, especially if I see some positive reports.

But honestly, the last thing the game needs is Navies. I have yet to see a grand strategic game get navies correct, and it is entirely plausible that liquid water doesn’t exist on 90% of the random worlds.
I really wish he had spent more time on QOL, AI, and documentation rather than adding more features.

Again, 100% agreed, and in fact I was going to ask you specifically if you felt like giving it another shot! I’m seriously considering one last try, which is far more than the game really deserves at this point, dammit. But I do so want to love it. I can hear that music now, and the gritty sound effects and unit voices as I issue commands. It ought to be the perfect game to while away the winter with.

Sigh. I fear my heart will be broken all over again, but I know I won’t be able to resist one last time…

The manual was updated after 1.09 (in case you didn’t know).

So, the very first thing I notice in just rolling a planet to start this one is (unless I’m missing it and with this game missing things seems to be part of the adventure), you can’t navigate the map using WASD and you can’t remap the keys.

Yep, the lack of configurable hotkeys is my pet peeve with the game. (I actually love the logistics.) I used Autohotkeys to bind WASD.

Someone on the Matrix Forums says SE is a Windows Forms app, which seems strange to me, but who knows.

Anyway, the game is fun and innovative, so I hope you give it a chance, notwithstanding this glaring flaw.

No weirder than Vic Davis’s games being made in Adobe Director, I guess.

The full 1.10 patch is officially released. I have jumped back in and am enjoying myself. I learn more each time. Its still lots to manage, but at the moment its exactly what I need.

Same highlights for me as the beta patches. This all improved my latest game, especially “Spread Out”, bunkers and AI speed.

I lost my first return game (on 1.10). That’s OK, I understood what was happening and why I lost. Some tips in the next post.

Here was the final view of the map. It was a Siwa class planet (Earth like), with some radiation, desolate wastes, and high mountains. Alien worms lived in the mountains, and I think they wiped out some minor factions because I encountered few. Here is a zoomed out view of my four zones. 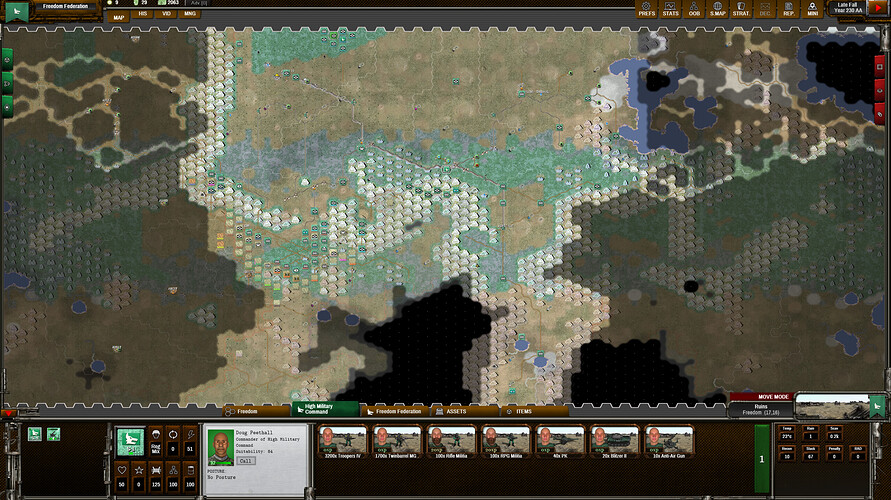 To my south was a major regime that I befriended early on. Republicans, and pretty easy going neighbors. We agreed a non-aggression pact - which was my biggest mistake. Later on I needed to invade them to win, and I took a massive loyalty hit from my most senior advisors for breaking the pact. Militarily things went well during the invasion. Upgraded infantry and tanks won most fights. I had fun sending infantry through the mountains to circle while my tanks rolled through the valleys. I think it was a low pop world because the cities and the defending units were not that massive. This is a close up view of my push south (I am green). I paired tanks with anti-tank guns, supported by mobile infantry in trucks. 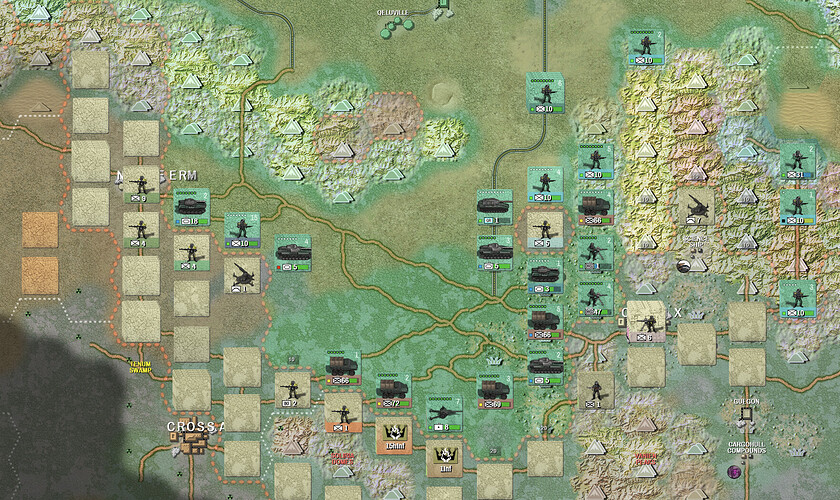 I managed logistics just fine. I am no expert! The biggest thing I learned since last attempt was to build truck stations and other “logistics extenders” one hex off of the main route. This helped fix a lot of my issues, where sometimes dropping a truck station right on the long road had previously made things worse. Here is a partially zoomed out view of that same front, the logistics lines in grey. Notice the two small indents in the road to the north - those are truck stations. 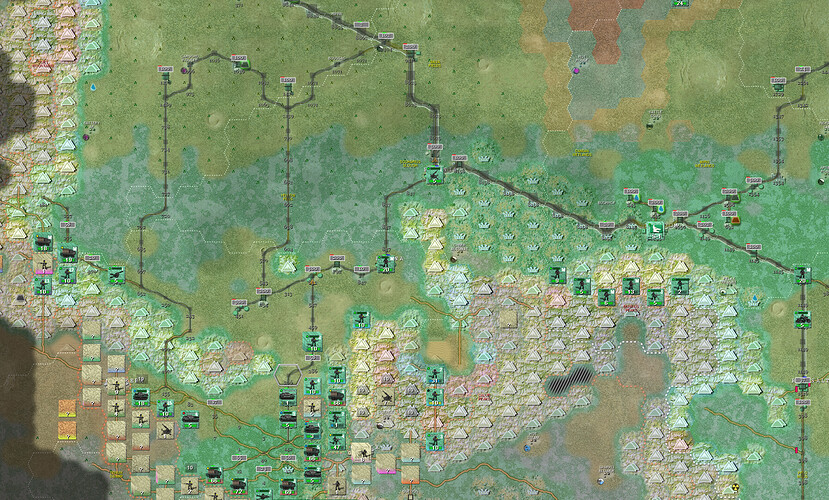 I got beat because a third major was already big, and they also invaded my southern neighbor at the same time. The third major grabbed more lands than I did, and triggered the “higher than 50%, and greater than 25% more than second place” victory condition. Nasty people, theocrats, I should have attacked them first. Good work, AI (on Regular difficulty).

Two tips. First, here are the settings I use for a good learning game. Not too hard, just enough of a challenge for me.

And here is the workflow I use per turn. I adapted it from someone in the game’s unofficial Discord, and refined it myself over a game.

Maybe that helps someone else looking to jump back in. :-)

Thanks, milspec, this looks handy!

What mods do you have active?

I use these three graphics / UI mods, which I consider to be essential:

I started a new game as well - all the art mods makes a massive difference!

There are rumours of rats of unusual size roaming the wastelands - this is of course complete nonsense! 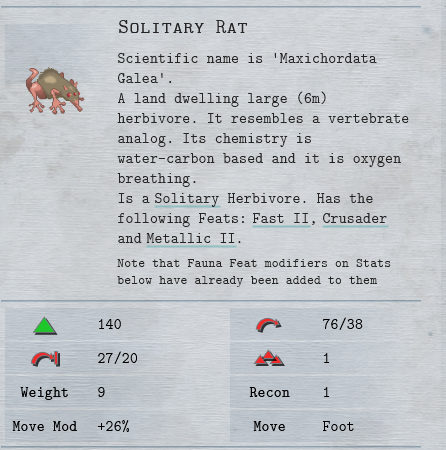 Alien worms lived in the mountains, and I think they wiped out some minor factions because I encountered few.

It’s comments like this that make me want to try this game.

I just worry it will be too much of a mental investment to understand it and too full of painful micro.

Me, too, but that post made me reinstall it anyway.