I just worry it will be too much of a mental investment to understand it and too full of painful micro.

I haven’t played in about a year, but I was able to mostly get a handle on things. I would just play, learn a few new things, then quit/restart when I decided the new things I’d learned would help on a restart. The game was interesting enough that I enjoyed that ride. But I can see many others not enjoying it enough to go thru this sort of cycle.

I treat each turn and game like a learning sandbox. The first few hours were very confusing. Watching a “getting started” video helped. By 10 hours I understood the basics (40% of the game). By 20 hours I was experimenting with multi-player with friends. By 40 hours I felt confident, but still did not understand 25% of the game (advanced model creation, logistics and Human Resources).

I stopped playing for about one year. This time it took 5 hours to get back to basics, and by 10 total hours I was learning new things. I binged this week and played almost 30 hours. I love it, it’s great. It’s very immersive, there is a lot to juggle, making progress is very rewarding.

Will try and record a “normal” turn or two and upload it so people can see what is takes. I follow my script above very closely each turn. So far it’s working. :-)

I like the fact I can dig into details and see every shot and every counter attack from every troop in a massive battle between hundreds of units that lasts 10 rounds. Or I can just watch the little pictures and see who lives or dies. It scales well from macro to micro.

Watching a “getting started” video helped. 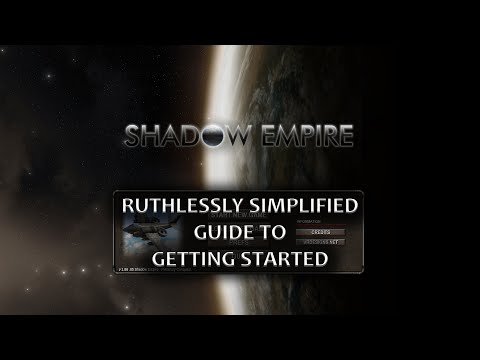 That one is the right balance of a good overview but not too much detail. 35 mins total.

Das Tactics has great ones, but they are 30 mins per topic across 10+ topics. Save those for later.

That one is the right balance of a good overview but not too much detail. 35 mins total.

Excellent, thanks. And thanks for your own guide posted earlier. Time to get back into this!

Added this mod. Edited my post above to link to all four mods:

Alien wildlife is easy, they said. No match for modern troops. 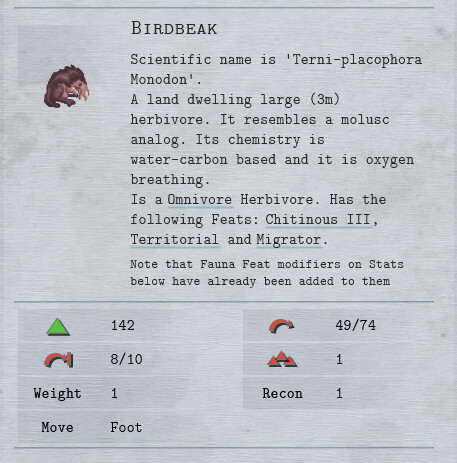 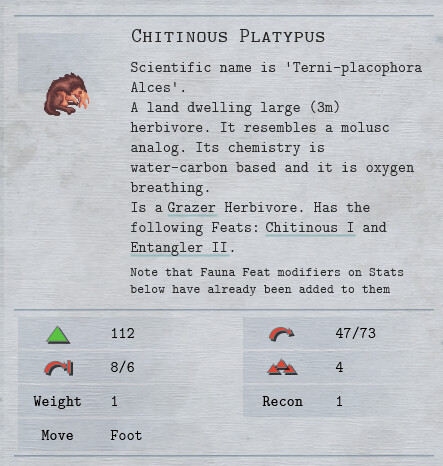 The second nasty platypus / mollusk things got four attacks per round. Four! My troops panicked instantly.

(Yes, those fights were somewhat staged - look at the low readiness, I would not have pressed those attacks.) 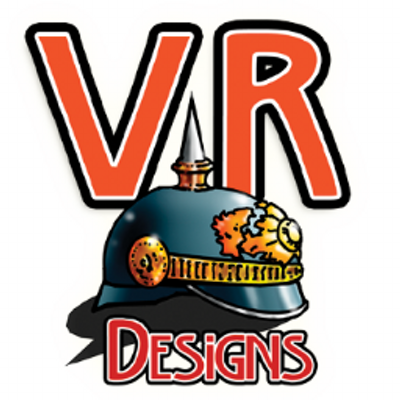 @VRdesigns
Hi everyone! I posted Shadow Empire Design Snippet #31. Hop on over to my website to read it: vrdesigns.net/?p=2131 https://t.co/2QkjVBBp2h 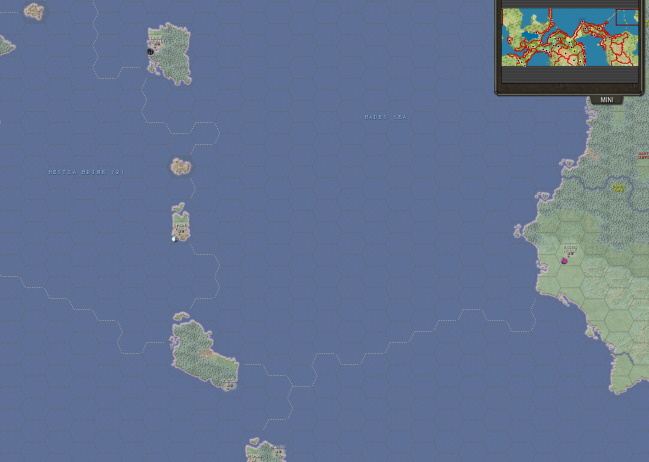 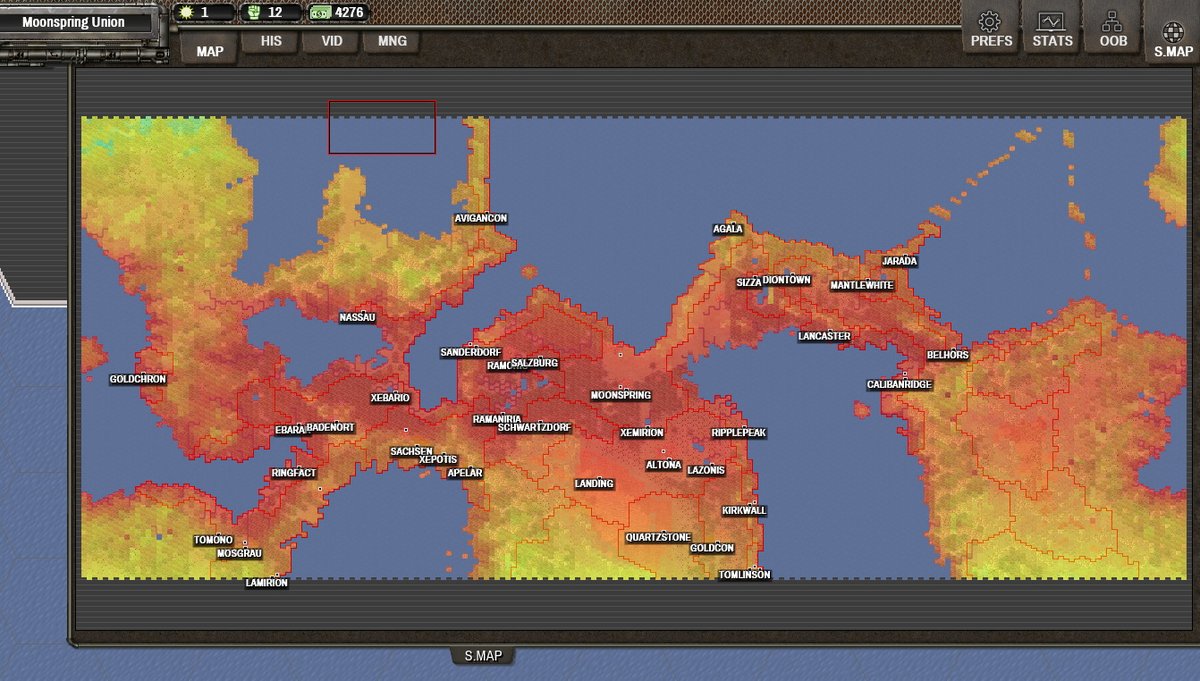 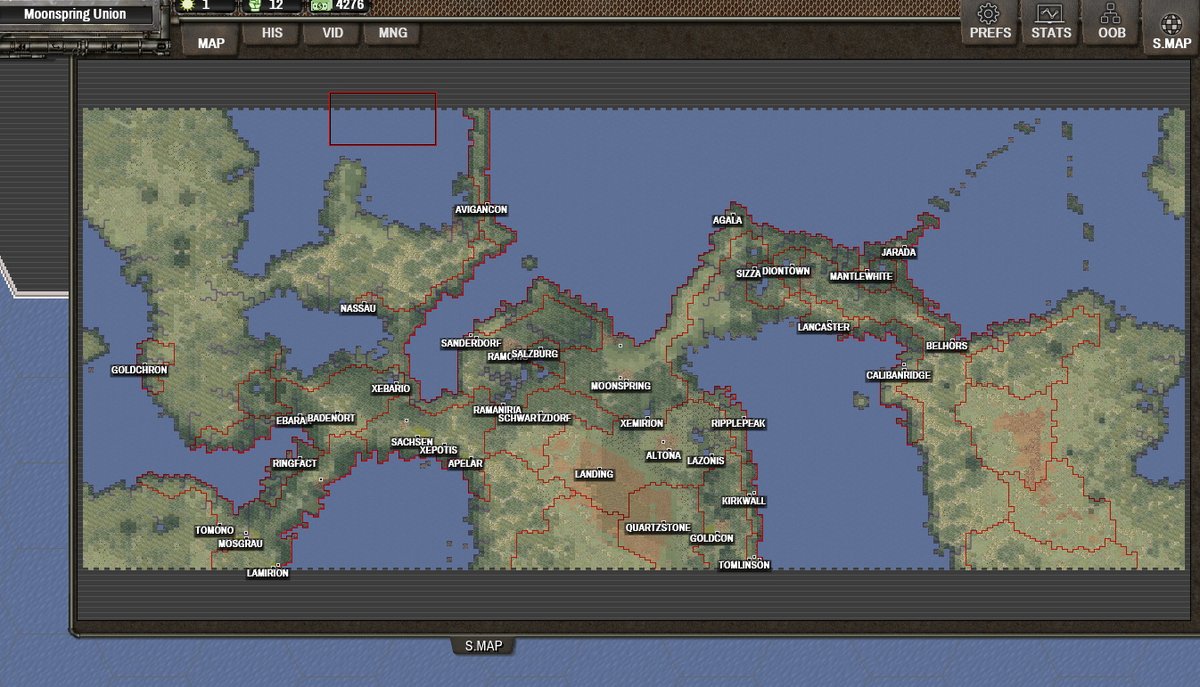 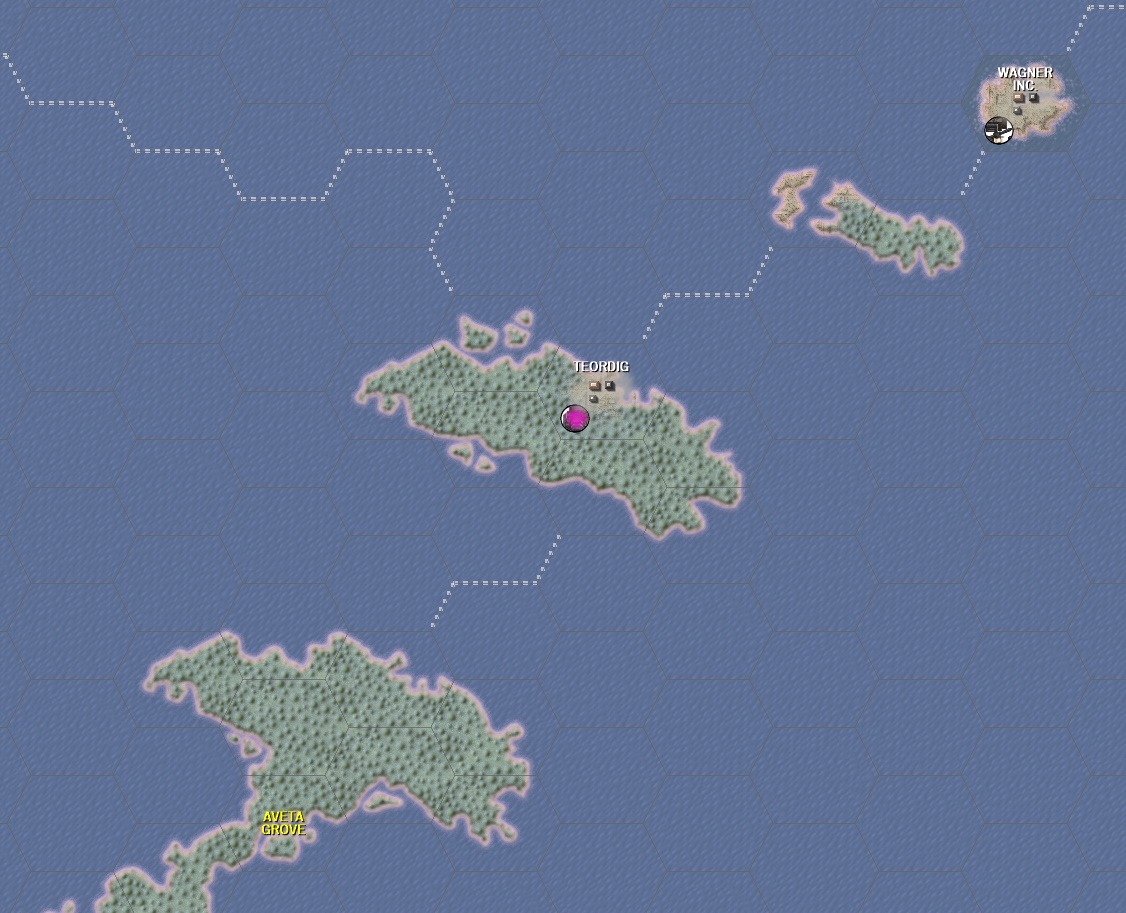 I watched that “bare essentials” video up above and that was enough to get started. I feel like I understand barely the essentials, but I’m not dead yet and start each turn with an idea for something to do. So many layers I don’t have a clue about. 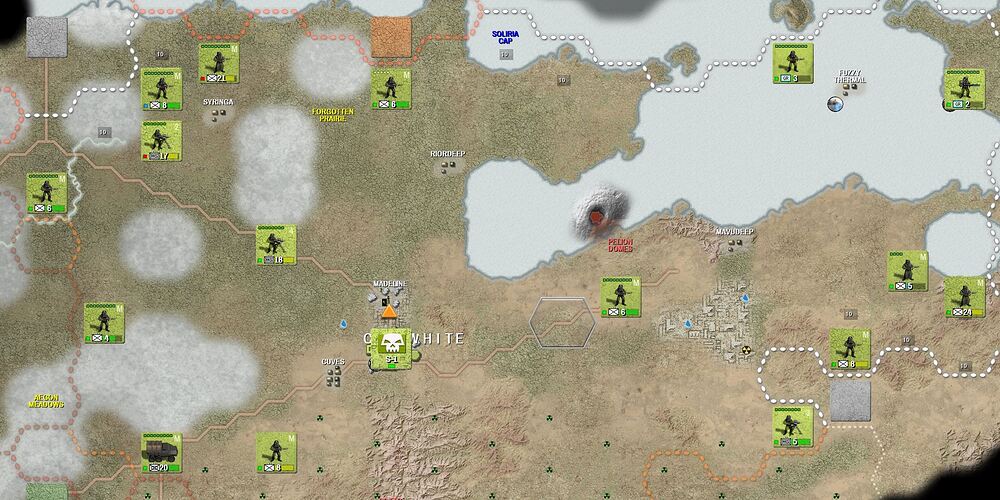 You appear to be well supplied, nice work. :-) Feel free to ask questions.

Am starting a competitive 1 vs 1 game with a friend soon, so I need all of the practice I can get.

The guys in the top left are looking a little hungry.

You’ve quite a lot of spread out units for early doors, I’d be tempted to get your transport hub nationalised if you haven’t already? I’m guessing you’re planning to grab that tasty triple ruins group to the east?

I’d be tempted to get your transport hub nationalised

Every time I see this in my library I think “maybe this is the weekend I finally start learning this” and then every single time I come to this thread and read something like this and I’m like “nope, I’m too dumb for this game.”

Dude it’s amazing. Read the great manual and dive in.

There is literally a button that say “Nationalise” on it 😁

There’s magic little people who build their own little enterprises and you as big state can pop over and just buy it from them. It’ll be, theoretically, more productive, but you’ll have to pay the wages of the labourers. 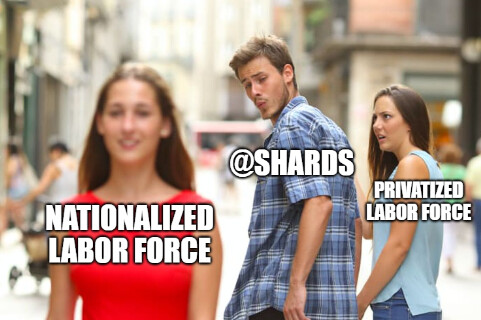 Okay, okay, I’ll watch some videos and finally install it! You guys have convinced me!

Thanks for the tips and support, everyone. I’m fairly happy that I still have a functioning society and it’s Round 72 or something. It doesn’t appear that the AI is super aggressive at the “Regular” level. I suspect that’s one of the reasons why I’m still around.

Am starting a competitive 1 vs 1 game with a friend soon, so I need all of the practice I can get.

The guys in the top left are looking a little hungry.

You’ve quite a lot of spread out units for early doors, I’d be tempted to get your transport hub nationalised if you haven’t already? I’m guessing you’re planning to grab that tasty triple ruins group to the east?

Is that what the red dot means? I’ve been building things like truck stops and supply bases now and then as it’s clear that logistical support of units is huge, but it’s all sort of “build something and see what changes”. I feel like I’ve learned a lot and yet only barely scratched the surface.

It’s been a bumpy ride. Following the bare essentials guide, I picked all the autocratic starting options, and after a bit all the people hated me and I was getting all sorts of revolution warnings. I decided to try to pivot and be a nice person, and I’m pretty sure that’s why all my cabinet members started to hate me, eventually revolting with armed forces and whatnot. The people seem to like me better, but the army, yeah, not too happy with things.

While all that was going on, I noticed that my army was vanishing. Like, literally every turn they’d be a point or two of strength gone from a unit, and some units were disappearing. I finally realized that we had no food and everyone was starving, so I built a couple of farms. But a few turns later things hadn’t gotten better. That’s when I realized that we had no water for the farms, so I created an ice mine and that seemed to stop the problem. But I still couldn’t start building back up the army until I realized that we had no munitions and could buy some of those directly.

So lately I’ve been building up our army and trying to squash the rebels, who really don’t seem to do much except hang out in our country and get in the way. The encircled unit in the top right is a determined lot led by my former Economic Minister, who I never liked in the first place. Whiny little jerk. 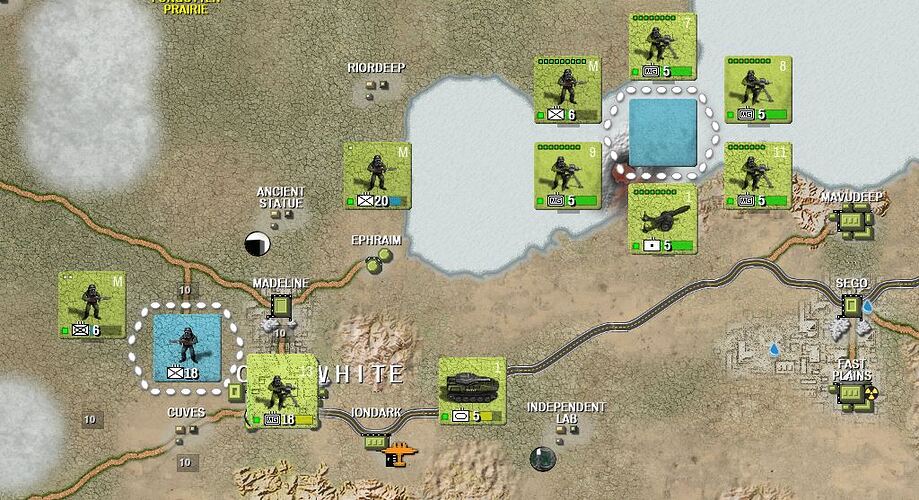 Okay, okay, I’ll watch some videos and finally install it! You guys have convinced me!

I tried a couple times before and never got anywhere. Yesterday I watched that “Bare Essentials” video at 1.5x speed, then fired up the game and walked through the first half of it again, doing the things he suggested. I found that was enough to get a foothold on the game. Once you get going you realize that the video leaves out 99% of the game so I kept telling myself, “Don’t worry about what you don’t know, just try stuff and see what happens.” So far that’s working. I already want to try a new game with the stuff I’ve learned, and now I’ve got a short list of game systems I want to learn more about. There are certain card categories that I can’t figure out what to do with, and I’ve got only the slightest grip on logistics, but they are fun things to be learning while you play.

It suits me very well as I’m a serial 4X restarter. I very rarely ever finish a 4X campaign and find most of my joy in rerolling and playing the early game to see what sort of playspace I’ve got this time. SE is amazing at this.

As such, I’ve learned the basics and general wiring of the game very well. Very few 4X games have had so many layers for me to uncover at my preferred pace

For me, the easiest / best start is: