Sherman Leader sits back and lets the dice drive 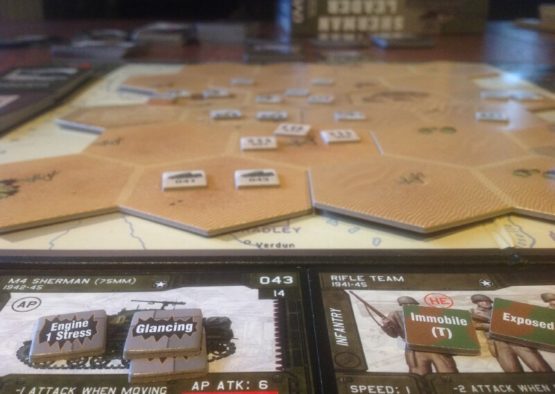 (Remind me to tell you one day about a game called Enemy Coast Ahead: The Doolittle Raid, which is an extensive, complex, epic, and oh-so-gratifying marriage of planning calculations with in-mission drama).

Consider this a reminder. You really need to write a review of that game.

Btw remind me to steal this:

Super-great read about some of my favorite games! Disappointing about the Sherman game, but can you win them all? (D10 to find out)

In the paragraph beginning “Thunderbolt Apache Leader” I believe the last sentence should read “In [Hornet] Leader, if Tonto accumulates stress, his F-14…” instead of [Thunderbolt Apache], but I think we all know what you meant.

Have looked at this for awhile but never pulled the trigger. Glad I did not. Trying Enemy Action:Ardennes now.

In the paragraph beginning “Thunderbolt Apache Leader” I believe the last sentence should read “In [Hornet] Leader, if Tonto accumulates stress, his F-14…” instead of [Thunderbolt Apache], but I think we all know what you meant.

Ah, thank you for the correction! Corrections are always appreciated.

Yes, Phantom Leader is good! B-17 Leader also has its unique charm, as you know. I have an unreasonable fondness for the F4U, so I wonder if Corsair Leader is any good? It even has B-25s!

You really need to write a review of [Enemy Coast Ahead: The Doolittle Raid].

I actually need to play the full game first. I’ve only played the modules at this point. You know, that’s what I should have done instead of messing around with Sherman Leader…

Have looked at [Sherman Leader] for awhile but never pulled the trigger. Glad I did not.

Well, there’s a used copy for sale on BGG now if you change your mind. :)

I’ve had that one queued up for a while now. It’s apparently a real masterclass in how to design a solitaire wargame.

This metaphor is just excellent, it perfectly describes what air combat is all about. If you got that from the game, it must be doing something right.

Get in, do the deed, get the hell out of dodge and don’t get caught.

Enemy Action Ardennes is one of the best solitaire games of all time. OF ALL TIME!

Darn it. I bought this game just a while ago as a way to revisit solitaire wargaming and get myself away from a screen more.

I gave up on DVG after the low-energy, low-effort mess that was U-Boat Leader. It was clear that it was rushed and poorly-playtested. Sad to see that DVG has gone off the rails after their glory days of the re-released Hornet Leader and Apache-Thunderbolt Leader.

Enemy Action Ardennes is one of the best solitaire games of all time. OF ALL TIME!

It’s my Xmas present this year, so that’s very encouraging!!

It’s also one of the best Bulge games OF ALL TIME. Arguably the best, but I look forward to trying Bruno’s latest when I have the space for it.

The only one I’ve ever played of Danny’s is the old ‘Battles for the Ardennes’, which I had as a kid, and which somehow became either destroyed or lost over the decades. I liked it fine (and I like his book on the Bulge quite a bit), but I doubt it holds up all that well nowadays – still could be great fun to play.

Imagine my disappointment to find out this wasn’t a game simulating William Tecumseh Sherman’s March to the Sea. A solitaire wargame who’s purpose is to burn Confederated states to the ground.

“And the Major General came in the niiiiiight!”

Really Tom kudos on the excellent sentence of writing and thought. Will stick with us for a long time. Enjoyed reading the piece just for that sentence.

DVG is now devoted to the awful Warfighter franchise which is proving to be a major cash cow for them. Masquerading as a tactical game it is in fact a simple resource management game with no tactics whatsoever. Doesn’t stop them reskinning the game into WW2 and selling those cards ad infinitum.