I sub every time yes. Its 3 dollars.

Legacy is AMAZING! Its easily the best mod addition to Skyrim in many years.

Do you need a paid sub? I thought just an unpaid “slow download” subscription was sufficient? Although I’m just doing mods through Vortex not Wabbajack

You dont need a paid sub at all. We are talking about the Wabbajack downloads (A downloader for very large modcollections) where, unless you sub over at the Nexus, you have to click through each of the often over 600 mods that a modlist contains.

If you just download the one mod, or a few ones, you will be fine with the slow download speed :-)

Sorry that Serenity is under maintenance. It looks like it will be fixed in a few days. In the meantime, there is a workaround for downloading the single broken mod. This is a copy from the Wabbajack Discord:

I would recommend trying the Living Skyrim 2 mod pack. It includes LoD. I had a lot of fun with that mod pack, but now I am waiting for Living Skyrim 3 to be released, whenever that is.

This discussion inspired me to re-install Skyrim in anticipation of starting a new game with one of the mentioned modpacks tonight. Unfortunately, it appears Living Skyrim 2.0 is no longer available on Wabbajack and both Skyrimified and Serenity are under maintenance. My gratification will have to be delayed!

Ah ok, thanks. I may try that if this install doesn’t work out.

In the meantime, I went ahead with the “Qwest” mod list instead. It sounds pretty close to what I want: mostly content fixes, minimal graphics overhauls. But we’ll see…they do seem to have a weird thing with bathing mods.

Qwest looks good. Tell us how you enjoy it. :-)

I sub every time yes. Its 3 dollars.

Fair enough! I’ll probably just do that next time the Skyrim bug bites me. 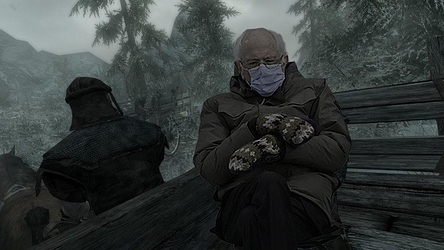 I started a heavily modded (249 so far) and am really enjoying it. Mods really make a huge difference, especially some of the environmental mods - birds with bird sounds, footprints in the snow, snow dripping off trees due to wind or melting, new environmental sounds, your breath becoming frosty when it get cold, etc. Plus tons of armor/weapons mods. After adding mods, this game still looks great after all these years.

I just picked this game up for Christmas (present for myself!). I’ll hold off on the mods for now but I expect I will end up with many if my Morrowind experience is any indicator. Oblivion, I just couldn’t get into and never even finished the game.

So I installed Legacy of the Dragonborn and started a new game using Live Another Life to get the Museum going right away (if you start as a traveler on the docks at Solitude, you start with a letter inviting you to be a Relic Hunter for the Museum and you get the first quest and the safehouse immediately.)

I’ve spent some time in the game doing the typical Skyrim craziness (“I need to get to point A, but on the way, B, C, D and E all happen”), and have only done a bit of Dragonborn Legacy (67 items turned in so far) but Holy Crap the Museum is INSANE - I was tooling around in the “Hall of Science and Nature” and those displays are very cool. The Museum is HUGE, and the player housing with crafting stuff is crazy. It’s the nicest player house I’ve seen so far, easily.

I’m not really sure how to get deeper into the Museum questline - Elf Curator Dude seems to want me to just play normally and bring crap back but I have only a fairly vague notion of what to gather (so far it seems to be “gather EVERYTHING”).

Anyhow, the Museum is cool.

I’m not really sure how to get deeper into the Museum questline - Elf Curator Dude seems to want me to just play normally and bring crap back but I have only a fairly vague notion of what to gather (so far it seems to be “gather EVERYTHING”).

That is correct. Every so often, just go back to the Museum and drop off some relics. At certain total relic counts, story stuff will trigger.

He’ll occasionally give you quests for particular relics but I think that part is mostly just a way to guide you to stuff.

Well I just got the quest that sends me to Elsweyr, and I learned that apparently the entire Moonpath to Elsweyr mod is incorporated inside Dragonborn Legacy. I’ve never tried that; I’ve heard mixed things but I’m going to at least start the quest line and see where it leads.

Oh my eyes! My ears! My brain…

So the contrast between the quality of the Dragonborn Legacy mod and Moonpaths to Elsweyr is… stark.

I feel almost sad for the makes of Moonpaths as they clearly had ambition and creativity but the execution, oh my. It is the jank. Janky janking jank. The voice acting is… not good. The graphics are… not good.

Sigh, I’m gonna have this stupid quest in my log forever, now.

Oh well off to gather more crap so I can trigger further quests. I believe the later Museum stuff is not contingent on Moonpaths so I’ll just press forward.

Poor Moonpaths. They clearly wanted to do something cool…

As I go to sleep after being off here for a few months I should say --I still play Skyrim – I play on legendary not because i am some weird good player but because I just like to play a hard game. Oh I mean Skyrim SE – the additional graphics do look nice.

I dunno why I still play this game. But I do. Moderately modded but transparent.

I feel almost sad for the makes of Moonpaths as they clearly had ambition and creativity but the execution, oh my. It is the jank. Janky janking jank. The voice acting is… not good. The graphics are… not good.

I think the graphics are probably the best bit, honestly. They’re not perfect, but they are sort of Elsweyr-y? and very different from Skyrim. The problem comes with…well, everything else. But especially the part where it’s clearly not finished in any meaningful way. You can clear everything in the entire mod in probably an hour or less and I guess there’s sort of a central plot in a vague way, but other than that there’s a lot that feels entirely vestigial and that plot does not resolve in any sort of satisfying sense.

As I go to sleep after being off here for a few months I should say --I still play Skyrim – I play on legendary not because i am some weird good player but because I just like to play a hard game.

I think we all still play. You are much stronger than me if you can plan on legendary. For some reason I like to roll through feeling like an amazingly powerful hero for most of the time, with some white knuckle action occasionally.

With Legendary I’m like, white knuckle even outside of combat because I fear it so much.

I just installed the latest Wabbajack Skyrim VR essentials and it includes the fantastic new HIGGS mod. This mod lets you to pick up objects ingame and has gravity gloves like Alyx. There’s another new mod called MageVR and I think it’s tanking my framerate.

Kristi! Welcome back :) (I’m apparently remarkably slow on the uptake)