Arcen just released some details about one of their upcoming games, Skyward Collapse.

So just what is Skyward Collapse? It’s a turn-based 4x simulation god-game.

Overall Gameplay
Set high in the sky atop a floating landmass that you are actively constructing as the game progresses, you oversee two warring factions (Greeks and Norse). Via solo play or co-op, you play as “The Creator,” helping both sides of the conflict – granting each side buildings, resources, and even new citizens.

However, the multitude of villages you create all have minds of their own, and will actively try to stomp the nearest still-standing village of the other faction. Given the resources and appropriate buildings, your villagers will gear up for war without your direct interaction, and will fight it out to the best of their abilities.

Unlike most strategy games, your goal isn’t to win. “You” aren’t represented by either of the sides, after all. Instead your goal is to balance this conflict as best you can so that neither side gets wiped out.

But you can’t just strip them of the ability to gear up for war: roaming bandits make defense essential. Not to mention, crime in each village goes up and up the longer it’s without a military presence, until it collapses into anarchy. You can construct embassies and assign traveling diplomats to them in an effort to reach a state of enlightenment where crime is no longer a threat, but this is difficult and only affects the two villages that are undergoing peace talks; their neighbors will remain as warlike as ever! 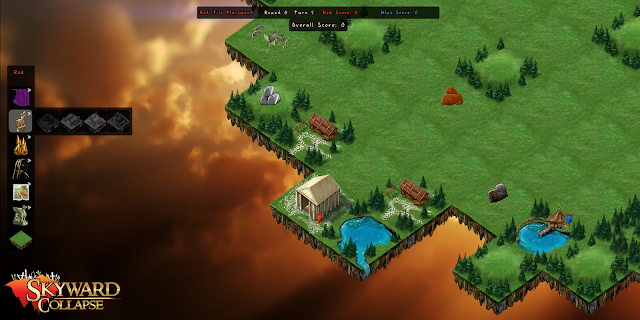 I am so turned on right now.

Arcen announcements tend to have that effect on people.

Their games, not so much.

Their games, not so much.

You always have the best gifs.

Very creative sounding, different than anything out there. Typical Arcen style. I’ll be buying.

This sounds exactly up my alley. Love the concept!

This is out today. For $4.50 it wasn’t even worth waiting for impressions.

If it is terrible I’ll just consider it as tossing money in Arcen’s tip jar.

Can’t wait to hear what you think, though I’ll likely buy it anyway. ;)

You certainly have to applaud Arcen for producing something truly different. I’m not sure how quite to describe it, but I’m really enjoying it so far.

It is all very german boardgamey. This is nothing like your normal god game. If you dig resource bean counting games like settlers or imperialism, or board games in general this is worth your 5 bucks.

The music is quite nice, all new age guitar and lite ren fair.

This game is one giant, weird, beautiful mashup. I just unlocked the final stage of the tutorial and now there are gods on the map and a countdown timer ticking away for my first woe which is going to make random parts of the map start cumbling in 8 turns.

I’ve got trolls, trojan horses, elf godesses, pan, and some norse bow goddess all crashing into each other every turn.

Thanks for the heads up on this. Reus got me back in the mood for god games, but it’s a genre that’s sadly lacking.

It can’t be that bad, there is bacon. Is there a way to clear ruins from tiles?

Is there a way to clear ruins from a tile?

bought. it is my policy to buy all arcen games. and the price is nice!

It is all very german boardgamey. This is nothing like your normal god game. If you dig resource bean counting games like settlers or imperialism, or board games in general this is worth your 5 bucks.

The music is quite nice, all new age guitar and lite ren fair.

WooO! Thanks for the review. I go to buy now!