As far as impressive units, I dunno… The berserkers are solid, reliable melee troops. I dig the Master of Possession, as noted. The Chaos Lord is solid. The Rhino can’t kill anything but it is very versatile once upgraded. Cheap too. That’s what I got as of now.

Worse than, say, “Shower with your Dad”? Really?

I haven’t gotten that far playing Chaos (turn 57) but the Chaos Spawn unit seems crazy good in the early game. It’s just a huge damage sponge at 36 hit points and with a speed of six it runs around the map faster than just about anything else. Plus it’s free and created automatically by the 2nd Tier Chaos Hero (Master of Possession) when he kills an infantry unit – does take 2 energy to maintain though. It does great damage against infantry – no armor penetration though. Seems like it could still be okay late game just as a response force that can move quickly and suck up a major amount of damage until slower better armed units can get into the fight.

Worse than, say, “Shower with your Dad”? Really?

“Shower with the Corpse Emperor.”

I’m discovering that the main tactic for large scale battles seems to be the shuffle. The AI runs in and unless I can kill something outright, simply swaps in a full strength unit the next turn and wears down my static, outnumbered defense.

Yeah, people who play multi are gonna lean heavily into the Spawn, I bet. They might never build standard chaos marines at all.

You realize “Slitherine Announces” is not part of the game’s title, right? Otherwise, what’s wrong with It?

I’m sure I should understand this by now but … just to double check, when I’m placing individual buildings in a city, it doesn’t matter which tile I place them in correct? In other words, the various terrain bonuses each hex has get added to the city as soon as the city expands in to those tiles, and are not bonuses specifically just for buildings built on those tiles.

I’m sure I should understand this by now but … just to double check, when I’m placing individual buildings in a city, it doesn’t matter which tile I place them in correct?

It does matter. The bonuses and penalties associated with the specific tile apply to all buildings built on that tile. For example, it’s not wise to build buildings that produce Food on tiles that have -10% Food. Deciding which tiles to acquire (that is, add to the city) and when are important strategic decisions.

Heh. I played again, this time as the Tyranids as a bit of a palate cleanser. Man, when your first Hive Tyrant takes to the skies and you double upgrade his loyalty skill…that’s pure 4x heroin. I might be the only one here who does, but I think I love the bugs enough for all of us.

Until I hopped in here cause I was bored, I’d assumed all this time this was a Roman legions game where you play as a gladiator in a colosseum or something… Like a text driven fighting game lol.

I don’t know how my brain works. It’s weird.

Well, the full name according to both Slitherine Ltd (the publisher) and Steam is Warhammer 40,000: Gladius - Relics of War, and the game marketing always displays the WH40K Aquila. But I can see why you were expecting Ancient Rome not WH40K based on our thread title.

I don’t know how my brain works. It’s weird.

Gladius is a Roman sword and there is no reference to WH40k, so it’s a fairly natural assumption.

Well now that you’re here, try it, it’s good. You’ll like it.

Until I hopped in here cause I was bored, I’d assumed all this time this was a Roman legions game where you play as a gladiator in a colosseum or something… Like a text driven fighting game lol.

I don’t know how many times I saw this thread and got my hopes up for a sequel to this game, which is one of the best tactical RPGs ever:

I think it’s finally sunk in, and this actually sounds cool in its own right, but whoever made this thread really should have put Warhammer 40K in the title somewhere.

So out of curiosity, is there actually something called a gladius that plays a significant role in 40K lore / this game, or is it just a random word that sounds imperial-y?

The game takes place on a W40k planet called Gladius. Which has all these relics on it. That come from a war of some kind.

Also the canonical Space Marine chapter, the Ultramarines, is pretty clearly based on Roman legions. They have Roman names, their officers wear Roman Centurion Crests on their helmets, and they refer to their short swords as Gladius.

While I don’t think the Gladius Relics of War game ever says their Space Marines are Ultramarines, they sure look like them, and one of their concept art pictures that shows up in during the starting cut scenes includes a Space Marine wearing a Roman Centurion Crest. 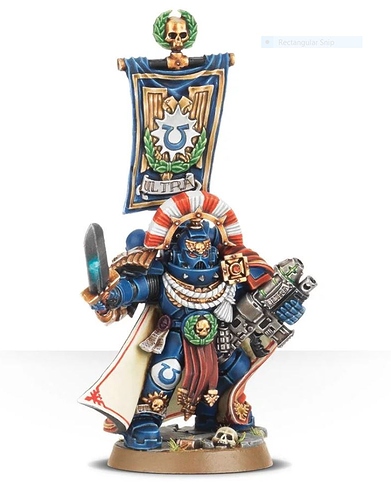