Snowrunner, aka Spintires 3, aka Mudrunner 2

Snowrunner, the sequel to Mudrunner, is out now on Epic Store

Only played the opening tutorial parts but the new engine is very pretty and the trucks feel great to drive. Not sure how I feel about the ability to auto-recover vehicles, instantly teleporting them to the garage for free. I guess that comes due to the move to a persistent gameworld and not wanting players to get permanantly stuck, but it seems like there should still be some cost involved with it.

Rescuing a stuck vehicle is half the fun of the previous game. :|

Snowrunner is pretty impressive. A friend gifted it to me today and I played for a little bit (until reaching Alaska in the tutorial). I can see myself having a great time with this.

I could have sworn that both this, and another game (Telling lies) were under “coming soon” or somesuch in gamepass. But now its not there. OH well.

I was watching a stream of this yesterday and it’s not at all clear to me what’s new, apart from the fancier graphics and American style vehicles. There wasn’t even any snow. Looks fun, and I like the respawning vehicle thing, but I really sucked at Spintires/Mudrunner, so I might wait and see if this hits Gamepass/Humble Bundle.

Rescuing a stuck vehicle is half the fun of the previous game. :|

For once, hifive Evil Komrad! This sounds absurd to me. The thrill of the game was the impeding danger of getting into a crazy situation. If there is no risk, where is the reward?

I was watching a stream of this yesterday and it’s not at all clear to me what’s new, apart from the fancier graphics and American style vehicles.

Aside from a new engine, the structure of the game is completely different. In the previous games you would load up an individual map and had the same goal in each of them; get the logs and deliver them to their destination.

This game moved to a set of persistant open worlds that’re full of different missions and things to find. The core gameplay is the same, but now you have far more varied missions. Rescue stranded vehicles, repair bridges and so on. Some of those missions will affect the map, for example repairing a bridge will make it usable from that point on, opening up new routes and shortcuts.

For once, hifive Evil Komrad! This sounds absurd to me. The thrill of the game was the impeding danger of getting into a crazy situation. If there is no risk, where is the reward?

For what it’s worth, you’ll definitely still have fear of getting stuck and be running rescue missions. When you’ve spent ages slowly getting a large load half way to the destination (and these maps feel huge), teleporting all the way back to the garage is not an appealing prospect. Especially when you had several narrow escapes just getting to where you’re at. Plus it doesn’t teleport any trailer that you have with you.

The new structure of the game kind of requires the recovery teleport, otherwise it would be very easy for players to become completely stuck in the early game when their vehicles are bad and they have no money to buy more. I do think there should be some penalty for doing it though.

True, that was discussed in the stream I saw, though he never got to that stage while I was watching. How dramatic are the upgrades?

How dramatic are the upgrades?

Hard to say as most are still locked for me and I’ve not tried them. Upgrades include things like better engines, more powerful winches, truck snorkels, AWD. Heck, the early vehicles all come equipped with road tires and require upgrading to better ones. However, upgrades are also gated behind level. Because like all modern videogames you now have experience and leveling.

Some upgrades are also found out in the wild. In general the game really ramps up the importance of scouting and exploration.

I could have sworn that both this, and another game (Telling lies) were under “coming soon” or somesuch in gamepass. But now its not there. OH well.

I do not recall either of those being announced as Gamepass games. Telling Lies has just come out on console, though. Maybe that’s what you saw? Just a general coming soon list?

Man the camera is really…average. It won’t stay still. It can’t decide if it wants me to control it or gently swing around when I turn my vehicle. Really annoying. I don’t recall fighting the camera so much in Mudrunner.

Early vehicles also seem, I dunno, not that responsive? Floaty, they slide around a bit too much for no apparent reason on otherwise reasonable tracks. Like either the physics is off, or they don’t have enough presence or weight.

Other than that, looks lovely, I might saturate it a bit with the nvidia filters. Lot’s more ‘game’ here and I like the open-worldedness of it.

Just gotta fix the camera and make it like Mudrunner.

I seem to recall an option somewhere in settings for the old Mudrunner style camera. Not tried it myself as I actually prefer the new camera so far.

That is very possible, and mirrors my own suspicion! Just quite weird!

I took a chance and picked up SnowRunner on the PS4 and played it obsessively over the weekend. I’m absolutely loving it. Mudrunner never grabbed me, maybe because I didn’t fully understand the game mechanics, or the graphics didn’t impress me, or I saw Tom rage quit on his stream. Or maybe it’s because I should have been playing this type of game on the console all along, instead of PC. Some games are just better as a “kick back on the couch” experience, you know? (I wanted to play the game over Steam Link but unfortunately the game isn’t available on Steam, and my last attempt to force an Epic store game to work over SL fell into the “this is too much effort to figure out” category.)

Snowrunner has an excellent tutorial, and the graphics are AAA quality (the Michigan map makes me feel like I’m back in Far Cry 5, except nobody’s shooting at me). The gamepad controls are easy to master (had to dial back the stick sensitivity a little). The only part that confused me was how to export my trucks back to Michigan after the tutorial takes you to Alaska. Once I figured that out, I started scouting and completing tasks, and generally getting into the groove of the game.

Speaking of Far Cry 5, I guess if I had a complaint about this game, it’s the lack of wildlife. It’d be nice to see some deer once in a while.

And the music is not that great. Since I’m on a PS4, I’m not quite sure how to get custom music in the background or if that’s even possible.

Yeah, this has taken over from ATS/ETS as my main podcast game. It’s fiendishly addictive, and the new progression structure helps me get over the frustration better than I did in the previous games.There are still some annoying aspects of the design, that unfortunately I won’t be able to mod out on Xbox, but it really nails that “one more job” thing.

I think it might be a step up in difficulty from the previous game? The road verges used to be pretty reliable for avoiding trouble before, but here on the Michigan maps at least, the verge is often very soft, and I’m struggling to identify when it’s safe or not. That might be just me.

There’s also a slightly more puzzle-y aspect to it, where sometimes you come across an area and go, aha, this is a trap! I’ve taken some very inadvisable routes with the large fuel trailer in particular, where the extensible feet have gotten stuck on all sorts of terrain.

It is very enjoyable, and a bit exhausting at times.

Speaking of annoying design, had my most frustrating play session yet yesterday, on the Not a Drill mission. Spent maybe an hour ferrying the required resources, including a tip-over and a wasted trip when I realised I couldn’t lift the metal planks using the crane I had. Final task is to take an oversized trailer to the drill site. OK, what do I need to hook up to it? The quest doesn’t tell me, unlike most missions, and of course when I get there I have the wrong saddle. So, I fetch a new saddle, and make the same journey all over again. When I get there, I can’t hook up, because the fucking thing has sunk into the (concrete/tarmac) ground. Only thing I can do is reset the mission, losing all my progress on it. This time, I’m doing the trailer first! Now about 200 yards from the destination I get the trailer wedged between a ridge and a tree and there’s nothing I can do to get it unstuck. Aaargh.

I’ve been really enjoying this game over the weekend. I’ve never played Spintires or MudRunner before. Some tips that the tutorial doesn’t really cover that would’ve saved me some time: 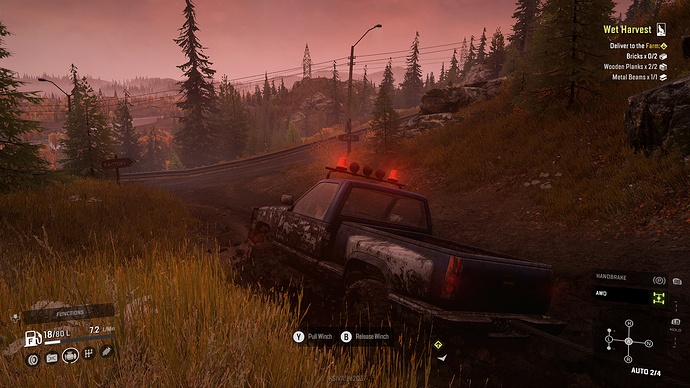 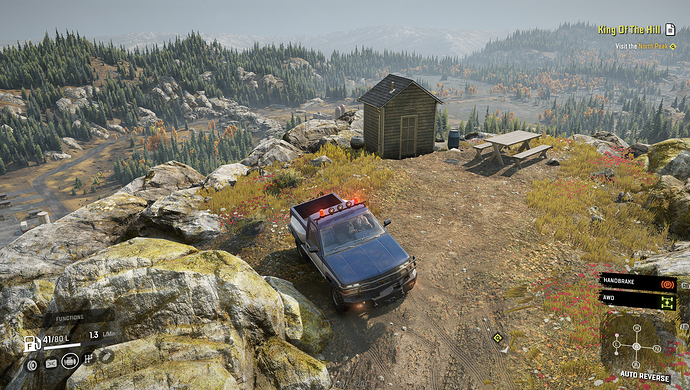 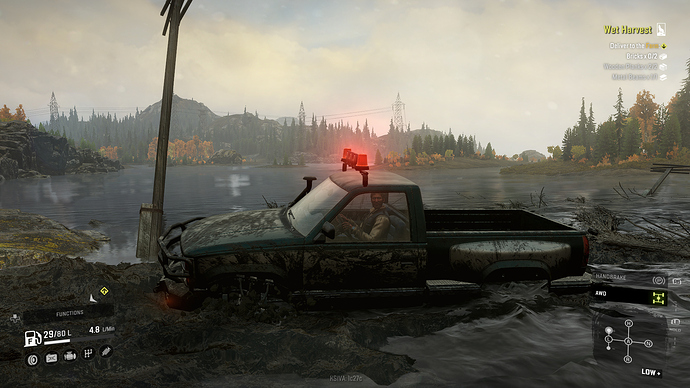 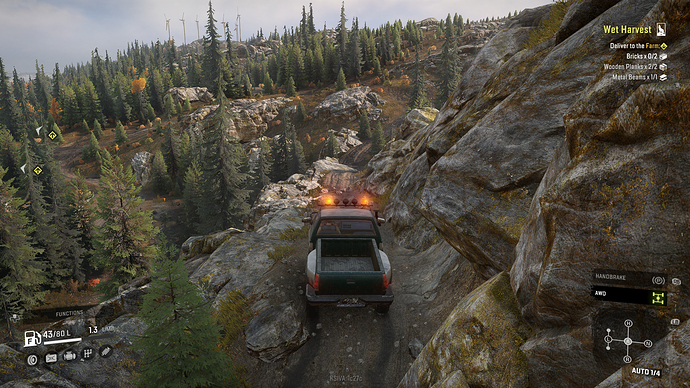 Nice pics, it holds up well.

I’ve moved onto Mudrunner and will eventually get Snowrunner when it hits Steam.