Based on my first day’s play, I’d say the tick time is what drives the need, or gives advantages to, players who are able to log in many times a day. Although it’s true that the default production cycle is 20 ticks/10 hours - which sounds relaxingly slow - response times to enemy attacks have to be much faster as travel time between bordering stars is around 4 hours even at the lowest tech level.

So I’d think that if you need a game that you can log into only once or twice a day, you probably need to increase the tick time by quite a lot.

LoL… I just stole a win from someone. I replaced an AFK player in a game where the large nation had a commanding lead- I wanted to see if I could at least mount a credible comeback. Then both the remaining players went AFK, so the game gave me victory. :) But it doesn’t reflect on my stats because it was a new player game (didn’t realize that when I joined).

Looks like 8 QT3 people in so far for the game. Will keep it open longer, so I can set max players correctly. I will err on the side of making this first one smaller, with mostly QT3, so maybe this will be a 10 or 12 player game.

@Mark_Weston I mostly agree with your points. Right now I lose because sometimes the other person reacts faster. In a real time game you can react every 30 mins.

I don’t agree with making the tick time longer, in general, because then everything else slows down. And you still have the “person who logs in more often reacts faster” issue.

I could make a turn-based and real-time game with the same settings at the same time, as an experiment to see how they differ in play, but I am concerned that may be too confusing. Thoughts from others?

Has the link for this game been sent?

I think it’s still being worked out.

Guys I’m really sorry but I will have to withdraw from the inaugural QT3 game. My wife just broke her arm and is going into surgery so it looks like I have a busy week ahead of me. Probably won’t be able to devote enough time to the game. I will get in on the next one hopefully!

Tagging @milspec so he sees this: please withdraw Fade from the game.

Thanks for letting us know, hope your wife recovers well.

Quasar Taurus 3 Alpha has been created. It is here:

I think I got the settings correct. Two changes from above: Carrier Upkeep Cost = Standard and Players = 12 Players

I lowered from 16 to 12 because we are a little lite to start. I sent the game password to the following 8 people:

That leaves 4 open slots. I will keep them open for Qt3 for another aprox 24 hours. Then I will offer them I think to the eXplorminate discord, since that is where I first heard of Solaris.

If you are a Qt3 member, PM me and I will send you the password. I ask the other players in the game to please be patient another day or two while we fill those last slots. :-)

How much does standard carrier maintenance cost? 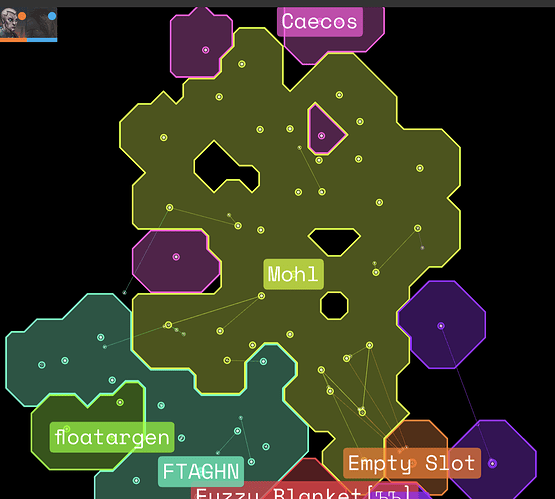 The end of an empire. I am still holding onto 31 systems, but my time is limited. I am yellow. The non-yellow lines in the south are opponents staging pretty big attacks. New mystery red and orange players must have big empires elsewhere and they have committed thousands of ships to attack me (in addition to my neighbor nemesis aqua green, who I could have handled 1:1). The yellow lines are my retreats, I empty the targeted systems of ships and am sending them all back to a few central locations. This will not make me win, but will keep me in the game a bit longer. My only hope is they bored or get in a fight with someone else who is attacking me.

Its not documented. Cheap carrier upkeep is 1 credit per carrier. So more than that.

All of us have checked in. Nice work! That leaves 4 open seats as expected. I will keep them open for Qt3 for another 12 hours. Note that everyone that replied to this thread is in the game, so its not likely we will get a lot more.

Next step is I offer those 4 seats to eXplorminate. I expect them to get filled quickly after that.

I estimate game start in less than 36 hours.

@Mark_Weston I mostly agree with your points. Right now I lose because sometimes the other person reacts faster. In a real time game you can react every 30 mins.

I don’t agree with making the tick time longer, in general, because then everything else slows down. And you still have the “person who logs in more often reacts faster” issue.

Having played a bit more, I think there’s enough flexibility in the game configuration for a middle ground between turn-based and real-time without slowing down the game.

For example, you could make the tick time 2 hours, reduce the production cycle to 5 ticks, and quadruple the travel speed of carriers. The result could be a game that ran at the same pace, but with less scope for micro-management.

Edit: I also quite like the idea of playing an actual real-time game with 1 minute ticks.

New approach. I deleted the 12-player game. I re-created a 9-player game, same settings, same password. I will PM each person to let them know. The new 9-person game is here:

It starts once everyone checks in.

Can you hold the start until tomorrow morning or something? I don’t want to miss the first “turn”.

Uhh I just joined the game and for some reason I have six stars under my control. Is that normal? Am I going to be the game’s punching bag because I appear to be in the middle of the system. lol

Oh wait, is it just that I can’t see everybody else? It looks like Milspec only has one star but perhaps that’s because he’s out of my scanning range.

Number or starting stars is a starting option, as was bumping us up to Scanning 3 and Hyperdrive 2.

In a Totally Dark game you can only see what is in your scan radius. You will look like you are winning, since you see you have 6 stars. You need to explore, take stars, and research expanded Scanning to see more.

You can set your initial orders once you have claimed a player. The first few days will be slow.