Roblox in general is a hive of IP infringement, for almost universally terrible games. Of the things my kids have coaxed me into playing with them, the few that I actually enjoyed were 100% original (near as I could tell).

Hot Tub streaming is already dead. the new hotness is…

ASMR, but the streamer wears sexy leggings, points the camera at her rear, and licks the microphone.

Twitch streamers Amouranth, Indiefoxx and others have hopped on another meta combination – TikTok leggings and ear licking ASMR.

We all have a choice here.

Many of the vods for these ear-licking ASMR streams are being deleted after they have been shown live, too, meaning viewers must be online while they’re live to keep up.

Why do you need to keep up? Is there an overarching plot to the microphone licking?

We all have a choice here.

Yes, we should watch a famous YTer’s take on it in the form of a steaming vlog. 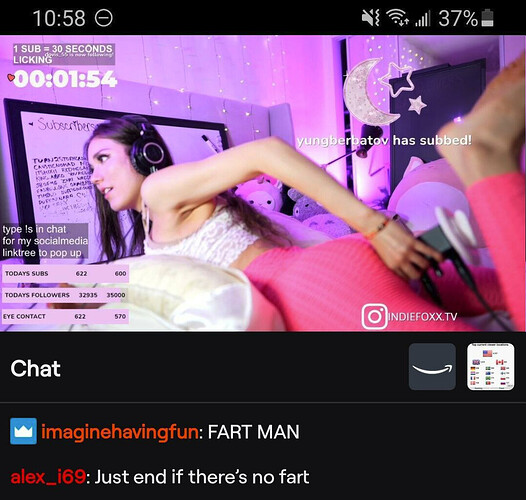 @Edgeyy
amouranth is losing her mind what the fuck https://t.co/XtPV4W6oVo

Immediacy and live chat gives a certain … fanaticism to a fanbase. I guess like live concerts. Let’s be honest, for pop music you get better sound quality at home with good headphones.

I’m honestly surprised no competitor has done it.

That said, there is obviously a market demand for it. The question is how viable it is money wise at scale. Because by most accounts Twitch is barely viable, much less Softcore Twitch.

Anything for a buck I guess.

All of this. Plus, once you codify and acknowledge NSFW content by having an “adults only” section, lots of filters will classify you as such. You lose advertisers and you lose viewers. Not to mention there are a ton of banking issues when you become an adult entertainment site.

Looks more like a stallion or mare to me?

I mean honestly all it really shows is that these content makers are deliberately and premeditatedly making soft-core porn-adjacent sexualized content. Considering that the average age of the women doing it is probably older than their audience, i’m sure there’s some pearl clutching concern that could be raised here.

The only thing that you can say “definitively” is that these content creators are deliberately, not accidentally, trying to make soft-core sexualized content, so the debate - if there is one - isn’t about censoring “women” or whatever but whether or not deliberately sexualized content is appropriate or not outside of pornographic sites, and where that tolerance threshold lies.

The only thing that you can say “definitively” is that these content creators are deliberately, not accidentally, trying to make soft-core sexualized content, so the debate - if there is one - isn’t about censoring “women” or whatever but whether or not deliberately sexualized content is appropriate or not outside of pornographic sites, and where that tolerance threshold lies.

Sure. I think it’s been that discussion since streamers started wearing low-cut tops and pointing the cameras at their cleavage. The journey from that to whatever this current trend is has been pretty nuts. Sex sells. We all know it, but Twitch is trying to walk that fine line between making lots of money and not becoming a cam site, while some individual streamers are pushing harder into the NSFW direction because it’s lucrative for them to use Twitch as the gateway into getting subs onto OnlyFans.

I mean it’s not just Twitch, let’s be honest, it’s pretty much the state of society now. What’s that line between “empowered” sexuality and just flaunting it? Where to draw the line between a woman’s body being naturally attractive and having boobs shoved in your face? How do you “police” what is and is not appropriate to for women to wear in various contexts?

Not only is this a conversation nobody actually wants to have today but honestly most people who aren’t Holy Book thumping types don’t even know where to start - Twitch is hardly the only entity not knowing where to draw the line. But all those people lining up to defend Amouranth or whoever for being demonetized seem to more or less be on the side of deregulating sex content carte blanche, for better or worse, maybe because content creation on these platforms is opaque, lacks communication and utterly arbitrary, or because they just don’t see a way to navigate policing women’s sexual boundaries and so just give up and don’t want to even try to in any context.

I think it has nothing to do with the state of our society. Teenagers in most of the West are losing their virginity later in life compared to 80s-90s …sex is generally less of a focus point. Revealing clothing does not objectify women, certain postures do. Risky sexual behaviour is becoming less common. And the most recent research on advertising refutes the idea that ‘sex sells’.

Twitch is now huge so it attracts everyone, including sex (imagery) peddlers. And the guys running the platform are clueless but they’re usually quick learners so I suspect they will adapt soon enough.

I very much regret clicking on this thread.

Twitch has 18+ content for years. Streaming violent video games aren’t 18+ content? Photorealistic headshot in a video game isn’t 18+? If you are caught watching Twitch at work, I don’t think it will look good now even if you are just watching the latest e.g. CoD stream.

Those advertisers themselves are trying to juggle the fine line between good taste content and not-so-good taste content. Some tech companies sometimes want to move the consensus rather than being driven by (imo wrong puritan) consensus. Maybe Twitch should try it with this “controversy”.

If you are caught watching Twitch at work, I don’t think it will look good now even if you are just watching the latest e.g. CoD stream.