Which I agree with, but there IS a normal/random map mode with AI and no story and the like - that’s actually in the game right now and is the default way to play, just FYI.

That’s cool, and I saw they’ve got random map generation on their list of to-do’s so I’m definitely keeping an eye on this one but I’ve been in no big hurry because it’s EA.

I’m not really interested in the story in most strategy game campaigns either, but a well done campaign can provide some fun, human designed challenges. You guys don’t enjoy that stuff if they’re well done?

You guys don’t enjoy that stuff if they’re well done?

This is probably the trick for me as I rarely find they’re well done imho.

For story telling and character development I read books and/or watch movies. For games I enjoy strategy/tactics and emergent game play.

The strength of PC games for me is their interactive nature and so I look for that from them because that’s their strength. The story is the one I’m creating by my game play.

As just one random example, I don’t need or want Old World to tell me a story, I want to create the story.

Yeah, the whole argument of ‘I don’t like campaign in strategy games because I don’t care for the story’ is hilarious. As if that was the defining trait of a campaign. No one I know cared for the story in HoMM campaigns, or in Age of Wonders, or Company of Heroes, or Men of War. They are enjoyable* because
-they offer handcrafted scenarios that assure you varied situations, unlike in a random map where you may have something different, or maybe something samey
-they ask the player different strategies to use (although depending of each game, this may verge towards a ‘puzzley’ feel)
-the scenarios are ordered from easy to hard
-they may leave aside some mechanics in the first pair of scenarios, to make the learning process smoother

*: the good ones, at least. Also, there are a few rare exceptions from time to time where the story is worth it.

They also do offer a lot of context to the board game pieces you’re playing with (when done well). Personally I’d be happy with a series of scenarios as much as a campaign, but whatever. For what it’s worth, the story-telling in SoC is perfectly adequate, if not pretty good (certainly for the genre).

I need to try SoC again - last time I checked, it was a great foundation but needed a lot of work to ‘finish’. I’m hoping their recent pass on the unit balance and abilities was enough. But I think there’s more to do still. Especially getting a decent AI (or other single player experience - though it’s probably too late in the day for that).

I honestly can’t think of a single escort campaign mission I’ve ever had in a HOMM-like 4X game like this one. I’m curious about what game(s) you encountered them in.

Yeah, more endemic of rts/fps implementations than HOMM-likes although i do remember one in an X-Com game. My burning hatred of escort missions just transcends the bounds of game categorization.

My larger issue with TBS campaigns is more in regards to the scripted/artificial constraints they use to hide the fact that there is no dynamic A.I. of value competing against you. I rarely feel like i’m playing a strategy game against an opponent so much as just pushing through/revealing a cutesy puzzle-box of map/unit restrictions that once revealed holds no real challenge. It doesn’t help that i’ve been playing fantasy games of all types and been devouring fantasy literature at a ridiculous rate for nearly half a century and the ‘story’ aspects/writing of these campaigns make me want to claw my eyes out.

Just give me the crunchy combat bits and dispense with the silly scripted puzzle-box set-pieces and endlessly iterated ‘chosen-one’ back-story/adventures.

My SO fired up Planetfall in preparation for the AoW4 release - but then almost immediately returned to this game. :) She is a big HoMM fan and she loves this game. I played co-op with her over the holidays and the game is pretty solid. The random maps are well done and leagues ahead of HoMM (4 or 5? One of them had random maps but they were god awful.)

The AI poses a challenge but it does have an issue where it will clear out mobs guarding a chest but not take the item/resource they’re guarding. Doesn’t prevent them somehow from fielding large armies, and more often than not larger than ours. The tactical AI is decent but I would agree the strategic AI needs some fine tuning. It could also use some QoL polish (e.g., upgrading units) but it’s in a pretty good state IMO.

Regarding campaigns, I don’t play them because they tend to be far too linear and become more of a puzzle than open-ended gameplay.

My larger issue with TBS campaigns is more in regards to the scripted/artificial constraints they use to hide the fact that there is no dynamic A.I. of value competing against you. I rarely feel like i’m playing a strategy game against an opponent so much as just pushing through/revealing a cutesy puzzle-box of map/unit restrictions that once revealed holds no real challenge.

Yeah, I’ll give you that one. Dead on. And just for the record, I hate escort quests too.

I purchased this, but haven’t had time to give it a chance yet. I think as soon as I finish up another game or two of Master of Magic I will jump in.

As for campaigns, I tend to like them quite a bit and will normally try them fist before doing skirmish/random maps. I especially like it when they let you carry forward hero experience and traits and/or items through a few maps like HOMM has done before. I especially liked the HOMM5 campaigns and played them all through back in the day. Sure, the story and writing can be cringe worthy, but I really enjoyed trying each faction and the hero/item progression in them. Fantasy General is another where you carry experience and progress through the maps, although that was campaign only, I believe, and didn’t have random/skirmish maps did it? Eador also did a nice job with a campaign, I believe, although each map could be quite a bit long and it took quite a while to gain unit/building upgrades as you progressed.

Just give me the crunchy combat bits and dispense with the silly scripted puzzle-box set-pieces and endlessly iterated ‘chosen-one’ back-story/adventures.

Probably the best 4X campaigns I’ve ever played were the HoMM4 campaigns. I know the game was panned on release due to the bad strategic AI and it is now often overlooked for its predecessors in the series but if you play it today, the campaigns are just excellent with quality writing and storytelling. And the music is fantastic.

After patches and DLC, HoMM4 ended up being a game I still play today although when it first came out, I couldn’t stand it.

My larger issue with TBS campaigns is more in regards to the scripted/artificial constraints they use to hide the fact that there is no dynamic A.I. of value competing against you. I rarely feel like i’m playing a strategy game against an opponent so much as just pushing through/revealing a cutesy puzzle-box of map/unit restrictions that once revealed holds no real challenge.

I’m curious which TBS games have obviously terrible AIs in the campaign, which can be scripted and tuned to compensate (to some extent) for bad AI, but then in a freeform random map, the AI really shines. I would think it would be even worse.

After patches and DLC, HoMM4 ended up being a game I still play today although when it first came out, I couldn’t stand it.

Really? I liked the visual style, didn’t actually mind what they did with the heroes (from distant memory) but the AI…maybe I should install and give it another go.

Some prophecies of doom do come true. Escape the flames licking at your back and jump q

It’s a great value since you also get all the DLC (The Gathering Storm and Winds of War expansions). One of my favorite campaigns one of the original ones, The Pirate’s Daughter.

Edit: The expansions fixed most if not all of the AI issues.

You’ll probably need to tweak the graphics settings to get it full screen or in a large window. It still looks really good imo, for a game that old. This is what it looks like on my PC: 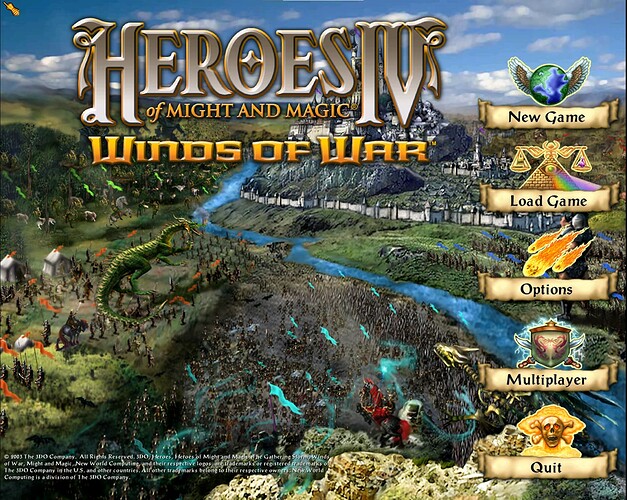 I haven’t thought about HoMM 4 in a long time - I remember I really liked it at launch until @ShivaX (who also enjoyed it at first) pointed out the AI was flat out not even playing the game, iirc it was kind of sitting around waiting for the player to come scoop up it’s cities. It took the wind right out of my sails and I don’t remember playing it even once since around that time. I also recall not being a super big fan of th Hero units being part of the battle, or something?

But I ended up liking everh HoMM game eventually, there is some fine and entertaining strategy going on in these games, though they almost always need at least one expansion to get there.

In any case $2.50 is probably worth checking it out, thanks for the reminder/info!

EDIT: Well, this worked out well - I pulled the trigger on it and found out for some reason I had $3 in GOG Galaxy Bucks or whatever, so it didn’t end up costing me anything!

EDIT2: @Coldsteel unchecking Full Screen isn’t doing anything - it remains Full Screen and the option re-checks itself. How do you play in a Window?

EDIT3: I see, there is a mod that fixes this but the author removed it due to the war in the Ukrane. I found another mod that also worked though, and allowed me to play in a 1080p Window. Looks and plays great! Name of this mod, for those interested, is Heroes4GL_1.50.exe. Extract and drop into the main game folder.

pointed out the AI was flat out not even playing the game, iirc it was kind of sitting around waiting for the player to come scoop up it’s cities.

I borrowed it from a friend not long after release, so recollection is a little hazy, but I do remember going through a large map. There was very little AI activity, and I was waiting for the inevitable Stacks of Doom to arrive but…they never did. The AI cities were very lightly defended; it appeared they didn’t bother to recruit. I assumed the last city or two would be large battles - they had to be at that stage, surely - but again, almost no defending army. I didn’t bother playing again.

Turns out I already own the complete version at GOG - may as well give it a whirl. Thanks for the info.