Also how old can you go?

I played a lot of StarTraders Frontiers already. The RPG ship combat with the card felt a bit too gamey for me, but the game was great overall. I am still quite bad at the game after having spent dozens of hours with it.
Icarus Starship Command Simulator seems good. I have to give it a shot. Thank you!
I can go up to Tie Fighters, or Independence War 1, but not before (and the UI’d better be relatively good!).

Any free roam 2d games where you guide your carrier around, launching fighter squads made up of pilots with personalities, stats, stories, etc? Too much to ask that a BSG Star Control exists? :)

I think the latest updates of Star Traders: Frontier kind of let you assign crew as fighter pilots.

Have you played Independence War 2 or Klingon Academy?

Have you played Independence War 2 or Klingon Academy?

I did play IWar 2, and loved it (I really like Newtonian games, even though they have a less satisfying “dogfighting” than games like Freespace, the fact that they make Space more different is a huge plus for me).
I have not played any of the Star Trek games, but I am also unfamiliar with the source material.

Welcome back to another week of spacey gaming, my friends! This week is a one-off week, and we start with a look at the potentially fantastic spaceship/station builder, Space Haven! There will also be videos of Space Scavenger, Space War Machine, Terra Lander II and more throughout the week!!

You can watch any of these streams live on Twitch, and you can see all of our planned upcoming streams and events on our calendar, as always!

No op-ed this week because I couldn’t think of a topic and didn’t wanna half-ass one. Both you and I deserve better than that. ;)

That’s it for this upcoming week, my delightful friends. Hope to see y’all somewhere!

Thank you! I will definitely try Klingon Academy. The “Academy” part made me not too willing to play it (as it implies I would play a simulator of a simulator!), but I now see it only applies to the first half.
Actually, Space Haven looks awfully close to what I had in mind (that is, if the characters are fleshed out). I’m glad you are covering it in you video (I also loved their game before: Battlevoid Harbinger).

That is pretty old. Honestly I’ve not played that one.

That is an interstellar crime! 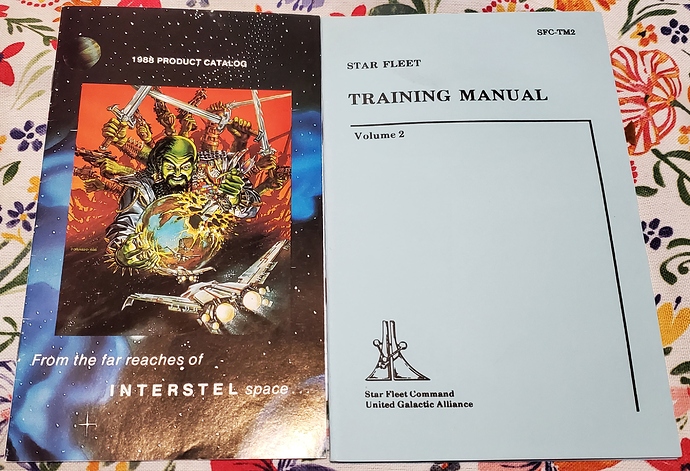 This training manual could only be acquired by specifically mailing for it back in the day. It’s a real treasure!

This training manual could only be acquired by specifically mailing for it back in the day.

The PDF version is available online a few places, but having the original printed version is certain special!

Exactly, now it can sit with the rest of the collection.

I just wish I had the box itself. I usually don’t keep boxes, but now I’m on the lookout for a new one.

That said, these have been INVALUABLE during my streams of the game.

Is the training manual background info for the universe or is it game specific?

A bit of both really. It goes through the games 8 tutorials and also has a tips and tricks section for the game in general.

I just tried the new game from Sokpop, called helionaut, and I think it’s pretty remarkable.

If you haven’t heard of Sokpop, they’re a Dutch “video game collective” that has a unique development model: They release a new game every two weeks. They’re all sold for $3 each on itch.io (and I think now all or most are on Steam?), but you can also subscribe to them on Patreon for $3 a month–thereby getting them all half price.

As you can imagine, the games are often pretty light and lack the amenities of more fleshed out projects such as tutorials and slick UI and tons of content. But they’re almost always creative and interesting for at least half an hour, and a few are true gems.

Anyway, helionaut is definitely in the latter category, and much more involved than many of their offerings. It’s an explore-the-galaxy game–kind of a slap-dash No Man’s Sky–where you fly your ship to other planets to get resources that let you build tools and upgrade your ship. I’m not sure how deep it goes yet, but it’s obviously goes deeper than you’d expect for a game made in mere weeks. I kept being surprised at the breadth of interaction that opened up to me, and the evident (if at first mysterious) set of gameplay systems for tracking down ship parts scattered across the galaxy. There’s even an intro cinematic, which I can’t remember any Sokpop game having.

The Sokpop “house style” can take some getting used to and I’m sure is not going to be beloved by all. But don’t be fooled by the 3D pixellated sketchiness into thinking this is amateur game dev night. I predict that with their quick-churn model, Sokpop is going to hit upon more than a couple quirky masterpieces in the future. And maybe helionaut is the seed of one of them!

Sokpop is dutch for sock puppet.

Does Battlecruiser 3000 allow you to launch fighters? IIRC Starshatter too. Though I’m not 100% sure they can fly without human directing them.

When is Elite Dangerous going to add what really matters? Blockchain?