Description reminds me of TerraTech but it’s not a spacegame.

I know what you mean, but that’s a very much ground based game.

(My ex housemate works at Payload 😁)

Hey @BrianRubin do you know anything about this?

Looks really promising, and should release by the end of the year apparently.

Yeah I’m aware of it, but as it’s multiplayer only I’ve not been in a huge rush to try it. Maybe when it hits 1.0 I’ll give it a whirl.

Fair enough. I’ll probably end up getting it sooner rather than later.

If you do please report back. I just have a natural aversion to multiplayer-only games.

Looks really promising, and should release by the end of the year apparently.

But will it be better than Stars!? :)

Just another Friday night at home, erasing humanity from existence… 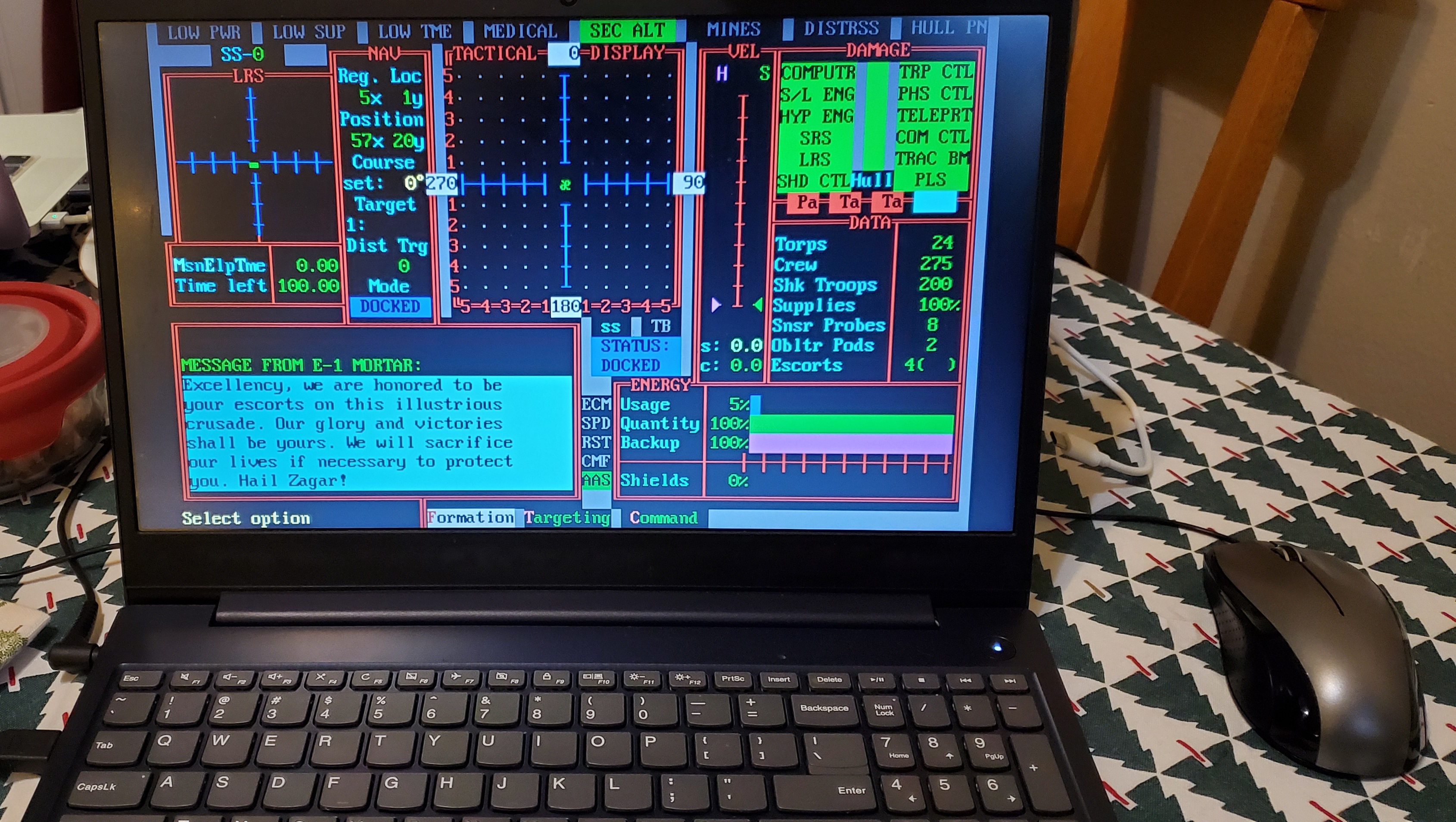 How’s the play testing coming along?

Splendidly! A new major upgrade to probes was just added and it’s a game changer once you’ve reached the admiralty and can upgrade your personal battlecruiser. They go from passive to active seekers of the enemy, and it’s amaaaaaaazing. The last new feature Trevor hopes to add before 2.0 is a Captain’s Log, a readable chronological log of everything that happened in a mission.

Hey @BrianRubin, I remember seeing some footage of a game years ago whose developer said it was going to be the DCS of space games. The footage I saw was just docking at a station or carrier I think, but with shitloads of systems “realistically” modelled and such. Wish my memory wasn’t so vague. Any chance you know what game it is, and any status?

Sadly the dev suffered a serious head injury some time back and development was halted. It doesn’t look like it’s going to resume.

Shame, dev was a great guy and he was making what looked to be a great game. I hope he’s okay.

A fairly positive review, despite some criticisms and no recommended rating.

Chorus has a demo I see.

I’m hoping to get a Chorus key, might buy it if not. The devs are great.

Wow, where did Chorus come from! I love these releases that I’ve never heard about before. I’m downloading the (enormous) demo right now, but it looks like it could be my thing. Steam review first impressions are pretty encouraging, except for a vocal weiner contingent who hate it because it’s got a female protagonist. They all need punching in their tiny dicks.

Ok, I played the demo of Chorus for half an hour. It takes a bit to get to the actual gameplay, first throwing an in-engine trailer at you, then a movie tutorial (perhaps the full game allows you to play these tutorials!), and then I discovered the SKIP button and got into the game. It took a little while to get used to flight. You can’t actually roll your ship, that I can see anyway, but instead the stick makes you bank, and left/right performs a barrel roll used to dodge heavy incoming weapons. You can re-level the ship at any time, but I admit I’ve always prefered roll control. Anyway, I got used to it.

Combat is good. You can boost, dodge-roll, slide and jump forwards towards a target, so in combination you have quite a few moves to make combat pretty fun. For example, you can boost towards a target, aim to the side, engage slide and then strafe it, or simply boost past, slide and flip 180 to shoot it from behind. I mean this is pretty much expected in modern space combat games now, and it works well here. Combat reminds me a litlte of… Freelancer perhaps, but maybe that’s because I was playing with m&kb.

Things explode nicely, it looks fantastic, and it seems like it could be a blast. It’s more of a story-driven space combat game though. Here’s your objective, go to it! Hard to judge diversity of gameplay from a demo, but the fundamental game is good once you get used to the controls. The game does wrest control away from you at certain points, usually to show you a new ship / threat type, and there are obviously some cut scenes where you have to sit back and watch. Whether it reaches the level of annoying that the Eurogamer review got out of it, who knows. I don’t tend to trust Eurogamer reviews much these days, but it could be a thing to consider.

Is there anything close, maybe with a bit better controller support (that also supports modern resolution/UI scale)?

3030 works with controller but it is kinda clunky, and it crashed last night too…

How important is controller support to you?