Spire of Sorcery - From Russia with Love

So how much are they charging for the “privilege” of testing their game?

the “privilege” of testing their game

In their defense, a substantial number of their followers were begging them to take their money and let them try it out, knowing that it is far from finished.

They have actually asked people not to give them any publicity yet.

This will get a demo in the June Steam festival and they are planning to do normal EA in autumn.

such a long way still!

They basically scrapped what they had created just before EA a few years back because they realized real time wasn’t working so they basically reworked the game to be turn based instead. I’m glad they did because I was getting some bad vibes from what they had previously. I have no idea how it plays now but I’m still pretty skeptical that it’s going to all turn out well at this point.

As far as the aesthetics of the game, I have to admit that I just absolutely hate the character art. I think it’s god awful ugly. It sears my eyeballs with its ugliness in screenshots. 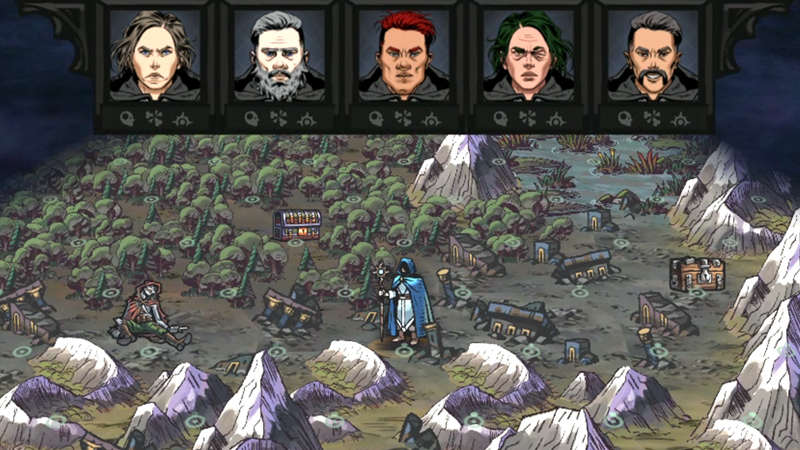 They basically scrapped what they had created just before EA a few years back because they realized real time wasn’t working so they basically reworked the game to be turn based instead. I’m glad they did because I was getting some bad vibes from what they had previously. I have no idea how it plays now but I’m still pretty skeptical that it’s going to all turn out well at this point.

As far as the aesthetics of the game, I have to admit that I just absolutely hate the character art. I think it’s god awful ugly. It sears my eyeballs with its ugliness in screenshots.

Yeah I’m cautiously optimistic at best as well. It sounds too awesome and intriguing. The big question is whether they manage to turn into into an entertaining experience in the end.

As for the character art I have to strongly disagree. I’m not in love with the style or quality but it does the one thing really well; it notably distinguishes the procedurally generated apprentices and makes them identifiable at a glance. If the developers manage to make them mechanically as individual and distinct that might be enough to carry the game.

Sounds like they scrapped all their early art as well. Hadn’t checked in years, but uh, that’s different!

The rest of the art looks salvageable is the nicest thing I can contribute.

Every month or two I watch their update video and/or play a little bit of the latest build.

The art does not bother me at all, but I clearly react very differently to game art than most people. The gameplay is shaping up as as original, at least not particularly similar to any game I have played. Back then, you sent out magically talented people to do stuff, and magic was rather remote, abstracted. Now, you are directing a band of mages through the wilderness, and encounters are all about the details of assembling spells.

It’s gone from a game about magic where magic was barely present (a criticism I would make about many magic games) to the most granular approach to magic I have seen.

I also appreciate games about travel through wilderness, where you feel the wilderness, and it seems to me that a lot of games are moving away from that, just moving from one node to the next, which could just as easily be urban points of interest.

Anyway, I am still optimistic about the game.

Got a notification today this is out in EA today, not sure why I put in on wish list as it was quite some time ago, but zero interest in what looks now to be a rogue-like DD clone. Don’t know if that’s how it started, but that’s what it looks to be now.

I played the demo during one of the Steamfests a while back, and thought it was pretty good, but can wait for 1.0 and more feedback before pulling out my wallet.

I played the demo a couple of weeks back and they’d gone from an intriguing “wizards tower” concept to a resource allocation game where the main challenge is the UI won’t show you the information you need so you need to remember a lot. Kind of killed all interest for me.

I was very interested in the initial design goals of this game. Sorcery management and immortality as an overarching goal. Exploration with groups of diverse and growing mage pupils. Solid alchemy and crafting systems.

Almost nothing of that is left.
Now it’s a mediocre Darkest Dungeon-like on a small open map, with characters that are all the same. Almost no grand scale management left. You just build a couple of buildings that give some bonuses at your home base.

The casting system is fine by itself. The many interactions (enemies have multiple ways to beat them, with different loot and varying per enemy) are enjoyable to explore. But it does turn a bit repetitive quite quickly with too much of the same combats over and over again.

Less than 2 hours in I’m almost certain I have experienced all the game has to offer and I’m already bored of it.

I do still really like the face generation though, in opposition to Coldsteel above in this thread. Visually characters are really easy to tell apart. Few games manage to do that to this extend.
Too bad that mechanically they are mostly the same and that great benefit is wasted.

Sounds like a substantial change from the demo released a couple of months ago. I may need to rethink this,

No, it’s exactly like the demo. Now you just also build buildings in the spire after a run.

I stayed away for months but broke down today and took the new version for a test spin. I expected to come back here saying how it remains a very promising game, but came away bummed. Admittedly, I don’t have a lot of patience for deck-building card games nor for rogue-likes, and from I can see, those are the directions the game has taken.

I haven’t given up hope, but I think I’m going to wait a while before re-visiting.

Ah, that’s a shame. I also have found myself very tired of deckbuilding and randomly generated content in games this past year.
Oh well.

For my part, it’s not the randomly generated content I mind. In this gaming era, I doubt that you can have an exciting adventure or exploration in a game without procedural generation, because the internet will be awash with guides showing where everything is in a set map, and then they have to optimize the experience for people who have read the guides.

My problem is with the expanding notion of grinding. It was bad enough that RPGs, being about leveling up, made an increasing portion of experience based on massacring repetitive mobs. But now a whole genre seems based on needing to lose and replay the opening of the game repeatedly, just to get the tools to have a real chance of success. Darkest Dungeon at least had a plausible cover story for why it played out that way – but wouldn’t you know, they took that for license to take it to an insane extreme. Which is probably what made it broadly acceptable to put out games supposedly dozens of hours long, where you simply go through the same basic stuff over and over with gradually improving tools. A game has to have something outstanding about it for me to be willing to put up with that. /rant