Mods for console games prove they’re possible inside a walled garden. You don’t get the same freedom as on PC where you can do nude mods, etc, of course. Private servers are obviously verboten.

Streaming is still the future for mainstream gaming, it remains manifest destiny. It just won’t be Google leading the way. At this point that looks overwhelmingly likely to be Microsoft.

We’re not talking about a walled garden stores. My console still… downloads. It’s my copy on my device. We already have several of those. This is different. I don’t recall any Playstation NOW games that let me play with fan made mods that actually fixes issues the devs never got around to fixing.

True enough, but there’s no technical reason why they couldn’t do all that. DLC is, in essence, a mod.

So, any modder will have to buy a second copy on PC, because uploading your mod to test will both be slow, and a serious security no no, so it’s not happening. Also, no developer will test every single uploaded mod, or run the risk of infringement for the tiniest of homages. Modding outside of popular PC mods while the game is still making money is a not going to happen.
Streaming may be as popular as MMOs or as unpopular as VR, but, either way, it’ll be something else I can happily keep ignoring (other than interest just because it’s tech).

They’re not going to want to support it, and it might be a little odd to take someone else’s work, throw it on your servers and what, tell other people they can use it? I mean that would be the devs, publishers, whoever is maintaining those servers in between a most free flowing relationships between gamers and modders. I mean the last time someone tried to do that, and throw some money in to support that work, it blew up in their face. That unnatural relationship just created a lot of… problems where it didn’t need to be.

Like I said, I do think there is a market for Stadia and what it offers, but the tinkerers, the guilds that maintain servers for their massive group and custom wants, the modders who pump out like a 1000 mods for Rimworld, the Sims where you get custom skins for decades because people don’t come in just 4 shades and it took the company years to care about that… all that stuff matters to people.

But is there some guy or streamer who wants to play his games on anything even in the middle of an airport or doesn’t want to drop 2k on a rig and hassle with compatibility issues and failures… sure they’re out there.

I think there is a big market for both. There are a bunch of people who will always want to have a local copy so they can do with what they want to it, mods, private servers, etc. I think there will also be a bunch of people like myself that for most games don’t care about any of that and love the idea of just streaming something to play it. I’ve been messing around with xcloud recently and love it. I find it really cool to just click a button and be playing a AAA title on my phone or tablet while I lay in bed. I don’t have to wait and install 80 gigs of data, I don’t have to worry about how it will play on my aging system, it just works.

I’m gonna be the “Well, actually…” guy here and note that Battlefield 4 had private servers on consoles. It was partially due to them wanting to hit PS4/Xbox One launch, but they’re still in use today!

What DICE seemed to find from that though was that private servers and consoles aren’t the best mix since they’ve had DICE servers be the main base on consoles with BF1 and BFV. They do offer Community Servers and just recently added them to BFV although they’re not persistent. It’s only up as long as you host it. Still, it can be a thing on consoles.

Just to follow up on the article I posted earlier, Rock Paper Shotgun is reporting that the problem with Journey to the Savage Planet may have been resolved:

Update: A Google representative told us in an email that the issues affecting Journey To The Savage have now been fixed. In an update to a Reddit post about the problems, Google says: “This issue should now be resolved. Thanks again for your patience, and please let us know if the issue persists on your end.”

Journey To The Savage Planet is broken on Stadia, and Google dissolved the...

Journey To The Savage Planet has a game breaking bug on Stadia, but Google fired Typhoon Studios and now no ones knows who will fix it.

Yeah, the update at the end of the article was even more confusing and just shows what a PR debacle this whole thing is. It’s says everyone at Stadia actually have not been fired, but they are closing it down and moving folks away. So…wait, is Typhon Studios still employed by Google or not? And assuming they don’t want other Google jobs, do they stay Typhon Studios and hold onto their games on other platforms or would they have to leave and form Typ000n studios?

Now that I’ve kinda internalised the idea of streaming gaming as more of another platform/code target/engine. I mean, Hitman 3 treats it like it’s own platform, it just doesn’t have dedicated hardware. And if you think about the amount of effort Nintendo/Sony/Microsoft/etc put into trying to win the console wars without a clear victor (let alone the undying console vs PC, or windows vs linux), good luck trying to be the clear winner. The fact that Microsoft is still fighting for it’s spot there shows that even if you throw a lot more resources at it, it just means you have a fighting chance to stay in the game.

I think there is a big market for both.

Right, but if you look at some of the conversations, even now as Stadia does it slowly die Google thing the claim is this is THE future for gaming… not like it’s just another part of it.

I think there is a big market for both. There are a bunch of people who will always want to have a local copy so they can do with what they want to it, mods, private servers, etc. I think there will also be a bunch of people like myself that for most games don’t care about any of that and love the idea of just streaming something to play it.

Yeah, there is going to be a market for both. Hell, I don’t even stream music - I still buy and listen to cd’s ripped onto my hard drive. If I could still do that with PC games I would but I acknowledge for a lot of people ‘streaming’ will be preferable just like it is for their music and tv/movie experience.

Now when I hear that “This is THE FUTURE” it files in the portion of my brain that deals with every other console claiming to be the future of gaming - cute thought but my past is this Steam backlog (and friends), good luck winning.

Now I realise that this mostly means there’s just one more platform for poor developers to support. All the consoles, PC (times XXXX stores) , Mac, Linux, Android, iOS and now Stadia and xCloud… Maybe it’s a secret dream to be an exclusive, it means less platforms to support…

Yeah, the update at the end of the article was even more confusing and just shows what a PR debacle this whole thing is. It’s says everyone at Stadia actually have not been fired, but they are closing it down and moving folks away. So…wait, is Typhon Studios still employed by Google or not? And assuming they don’t want other Google jobs, do they stay Typhon Studios and hold onto their games on other platforms or would they have to leave and form Typ000n studios?

FWIW, the original article didn’t say they were fired/laid off/whatever. They closed the studio down but they were trying to find new roles in Google for them. This is pretty normal for a lot of these tech companies (same happened at Microsoft when they shut down Beam for instance). So they are still getting paid by Google, but they have a period of time to find a new role within google or external before they will be let out.

Yeah, it’s a bit confusing but even after the closure of the dev studios there’s still a couple hundred engineers working on Stadia full time. That side made up maybe 20% of the overall heads on the platform.

The issue is that Google, both fairly and unfairly, already lost consumer confidence with their little to no consumer support and how many services it closes. Selling a product which may have a short shelf life with varying advantages and disadvantages with no guarantees of longevity is only going to appeal to those who don’t care and also aren’t affected by the downsides, which it turns out, isn’t a lot of people.
Keeping things vague to not go over the same things again, whether we agree or disagree with the specifics of why it’s not a good value proposition in general, the market has said this particular one isn’t. We will need more offers to conclude definitively on why.

Regarding private servers, that was in the context of Stadia where it really doesn’t even apply as everything is in a datacenter somewhere.

Streaming is clearly the future for mainstream gaming. This will happen. That doesn’t mean all enthusiasts will switch, many won’t. I know I certainly won’t until it’s comparable to my high-end gaming PC, meaning high resolutions, refresh rates, and image quality. And that may happen eventually, but the experience will never measure up, latency is unavoidable, it’s the speed of light.

Again I said streaming is the future, not Stadia. Stadia is dogshit, that was clear from its launch.

Well, from my understanding the tech behind Stadia works really well. They just picked an awful model to launch this thing with. No one wants to pay full price for games that they can only stream on an unproven store like Stadia. If they had done a subscription service like Gamepass they would probably be in a lot better shape right now.

Yeah it works fine. Streaming videogames isn’t all that hard. There are a bunch of companies doing it now, many of them aren’t backed by big money or tech genius. You can even do it yourself with Parsec or Rainway; people are renting VMs on Azure or whatever and streaming games from there.

Of course comparing to Game Pass at $4.19/month, well that’s hard to beat.

Streaming is clearly the future for mainstream gaming.

So Stadia but not Stadia. Again, doubtful, pretty sure mainstream is the millions of free games people play on their phone, and they really care if they have 60fps on some actoin FPS that isn’t on their application storefront.

Shall we review that the game market looks like. 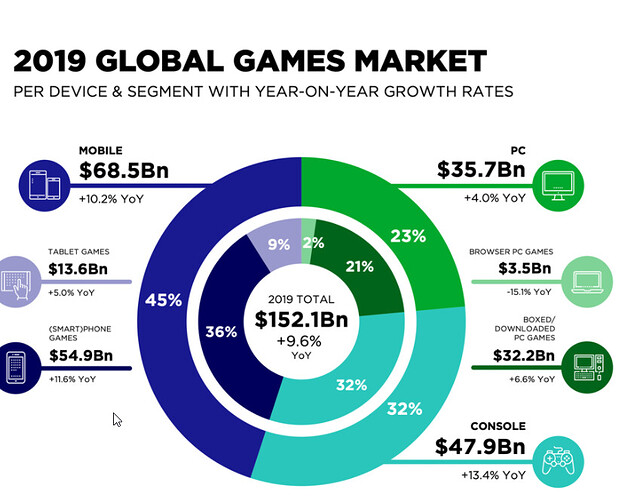 Which of these requires a device mainstream doesn’t already have? Oh yeah… not the biggest one. And you don’t have to worry about quality either. Just 99 center the app and bam.

That diagram is exactly why game streaming will be huge and there are so many companies are going after it. You are basically taking the huge market that is Mobile and giving them access to games that used to require a PC or Console.