I guess we have taken a break after TOS, Animated and then original cast movies, but my wife suddenly decided this weekend that she wants to rewatch The Next Generation. I warned her that, imo, that is a bad idea, but it is happening nonetheless.

TNG begins with what I believe to be the worst three episodes you could possibly use to try to introduce a new cast, 80 odd years later. First and foremost, Encounter At Farpoint.

Again imo, Q is the worst character TNG ever invented. You want to do an SF (SCIENCE FICTION!) show that updates TOS, and the first thing you do is throw in a magic-user? WTF kind of dumb idea is that. Plus he is just annoying as fuck, though I will grant DeLancie does a good job acting the role. They also really shove Troi down your throats in this episode, but can’t decide what her powers are. And they shove Wesley down your throat some, though not as much as the next two episodes. Then let’s throw in some space-jellyfish, and voila! you have a mess of a first episode.

Next comes OMG The Naked Now. Update to The Naked Time, but with more sexing and less swordplay. I can’t imagine a worse idea than, right as you introduce a batch of new characters, you completely undermine their relationships with each other and with the command structure. If I was Picard, I’d be asking for a new command after this–how can you look these people in the face now?
Plus more awful Wesley nonsense, Data having sex, Tasha being crammed down our throats, and just general stupidity run rampant.

And then as if that isn’t enough, the third episode is “Let’s Assemble a Backwards Barbarian Black Society” and dare people not to call us racist. Oh wait, the actual title is “Code of Honor,” wherein they cram Tasha down our throats even more, with the cheesiest knife fight since West Side Story. Plus a vaccine that apparently cures a disease they don’t even have on this planet, but will cure a disease on another planet they’ve never heard of, and it can AMAZINGLY only be manufactured on this joke of a planet. Plus more Wesley and other children shoehorned in, because the producers desperately want this to be accepted as a show for kids rather than just 40-somethings on a nostalgia trip.

Episode 4 is a big step up, but by then, if it didn’t have Star Trek in the name, I’d have long since quit watching.

Comments, or should I assume we aren’t going to do a rewatch?

This. I remember watching Encounter at Fairpoint and being so disappointed. But I liked Picard, so I chose to stick with TNG to see where it would go, and at some point during Season 2 I started to actually like it.

Man with the exception of maybe three episodes season 1 is such a shit show.

You son of a bitch.

Ok, I’m in. But only one week at a time like our TOS rewatch, damn it. What is this 3 episodes a week stuff?

If you only watch one a week, it’s going to take you nearly a full year for it to actually get good.

I actually disagree. I rewatched the whole series when it came out on DVD in the early 2000s, and I really enjoyed Season 2 for the most part. We can get there in only half a year!

Oh, you’re right–season two is when Riker grows a beard.

You son of a bitch.

Ok, I’m in. But only one week at a time like our TOS rewatch, damn it. What is this 3 episodes a week stuff?

We can certainly comment on one per week if that is the consensus. But I know my wife will want 2 per night, so I will be a bit ahead for once, instead of always behind.

Good for you guys keeping the show rolling. I don’t think I’ll be joining you - one because there’s just so damned much TNG, but also (mainly) because I’m just not that into TNG. It’s got its high points but it just never took root in my heart the way the original series did. The crew is ok, and they definitely grew on me over time, but it always felt like the TNG Enterprise was an ocean liner to the stars, it was as if the spaceways had been paved over and space travel was just routine.

I was never really all that bothered by Q though. Partly because I did really like John de Lancie’s impish take on poking holes in all the Starfleet stuffed shirt ways of doing things - but there is also a fairly long line of all-powerful but fairly childish beings that cause all manner of problems for the crew going back to the old series.

Anyway now that I think about it I may have to rejoin you for some high points - I love “Conspiracy” at the end of this season, and there’s always stuff like “The Best of Both Worlds”. I mean it’s Trek, I’m not capable of hating it, even when the crew turn into lizards and start having little baby lizards and stuff.

I could probably do 2 a week.

I’ll be buzzing through the first few episodes this weekend.

Ok. I had some time last night and put on the 2-part pilot. But first, a little background:

I was in high school at the time TNG launched, and being a long time fan of TOS, I and my nerd friends were excited. We had a watch party at my house. I believe the general consensus was the show was pretty kick-ass. I think the fact that we were starving for science fiction on TV was enough to push us through the first few episodes of the show because looking at it today, man is it rough.

I think for the TNG stuff, I’m going to stick with general impressions and observations.

When my wife caught wind that I was watching, she immediately complained that it will take the rest of our lives to get through all the seasons of TNG. I suggested it was about the journey, not the destination. She grudgingly sat down to watch. By the end, we has a pretty good conversation about it. I think she’s in for the long haul.

Encounter at Farpoint (Parts 1 and 2):
I suppose by the standards of TV pilots in the late 80s, this isn’t that bad. But it does suffer from lots of padding. There is an inexplicable need to ham-handedly explain the motivations of nearly every character. It’s clear the Picard and Riker don’t have a bead on their characters. And Data was very robotic. Troi was annoying (“Pain!”). I though the interaction with Picard and Crusher was good, but that scene was awkwardly placed in the middle of some very important stuff a Starship Captain ought to be dealing with.

As for Q, I think my problem with him in this episode stems from how it plays out at the end. The crew are figuring out the “mystery of Farpoint Station” to prove humans are no longer a violent race and Q keeps suggesting they commit all these violent acts. Why would anyone take the bait?

This pilot is serviceable, but a bit on the weak side. 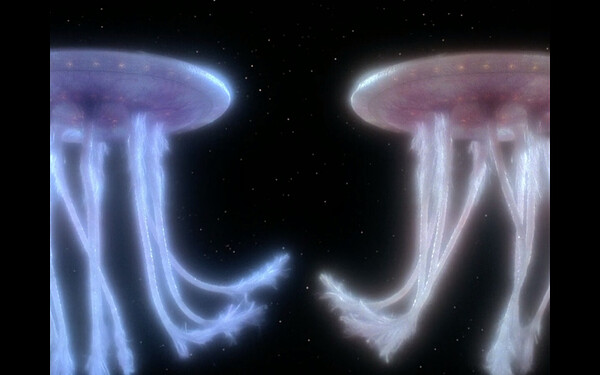 I think they should have held off on the Saucer Separ until a later episode.

And what’s with the music during that sequence? It’s the rousing Goldsmith theme, but all the crew are just standing there with nervous expressions, like they aren’t sure its going to work. But the music is telling the audience that it has. So weird.

Chief O’Brian in the very first episode! (Before he’s a Chief)

The mysterious Ferengi are mentioned a couple of time. Funny how all that turns out in later seasons.

Do accents get thicker the older you get? 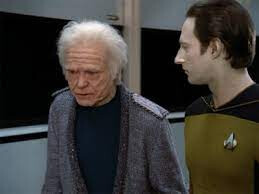 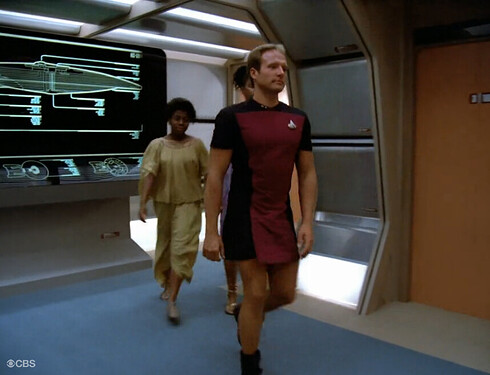 “Let’s see what’s out there. Engage!”

I could not disagree more about Q. I love John DeLancie in this, though not necessarily his first appearance.

I’m actually on my first watch of the series, I go very slowly, as I’ve only ever seen scattered episodes in the past. So I’ll link up with you in season 2. And rewatch Measure of a Man when that comes up.

And good god skip anything with Luoxana Troi. I can’t stand that character, not helped by how generally terrible Deana is at her job.

I loved Q, and I actually ended up being surprised by Luoxana Troi almost every time she showed up, much to my surprise. It’s definitely a character that grates. But on my rewatch in the 2000s, I remember being surprised, particularly at a couple of episodes where underneath that grating exterior, they really did a good job with Luoxana, and I ended up enjoying the episodes because of her.

I agree with pretty much everything in this thread and is why I’ve never re-watched TNG. Season 1 is sooo bad.

I really wanted to introduce it to my kids, but, I knew I couldn’t suffer through S1. 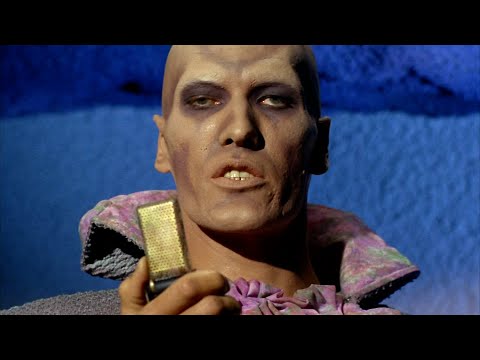 Season 1 just screams “this was made by people who made or wrote TV dramas in the late 70s-early 80s”. You could swap out the basic plots for a bunch of episodes with shows like Buck Rogers or even like TJ Hooker or whatnot.

I think you could watch the pilot, maybe a couple of select episodes for characters (Datalore, Heart of Glory, Coming of Age/Conspiracy) and then the season finale (which shutters the Ferengi experiment) and go straight to Season 2.