The best way to enjoy TNG Season 1 is to fold in Wil Wheaton’s behind the scenes episode guide Memories of the Future. It’s available on Kindle and there is also a companion podcast still available(?) here and here.

From Encounter at Farpoint to Datalore, relive the first half of Star Trek: The Next Generation’s unintentionally hilarious first season through the eyes, ears and memories of cast member and fan Wil Wheaton (Wesley Crusher) as he shares his unique perspective in the episode guide you didn’t even know you were dying to read.
ENJOY snarky episode recaps!
EXPAND your Technobabble vocabulary!
AMUSE your friends with quotable dialog!
BOLDLY go behind the scenes!

That’s very cool! Thanks for the heads up. That should make things more interesting for sure.

Oh definitely! Wheaton’s blogs about the various episodes are wonderful. I read them many years ago, I should revisit now.

Watching Season 1 again a few years ago, my enjoyment stemmed from seeing these actors struggle to find their characters, and the characters struggle to find themselves. I treated it like TNG: The Early Years and from that perspective it was quite enjoyable. There were some truly dire episodes (Angel One being perhaps the bottom of the barrel) but some decent ideas that… well, just didn’t quite work. They were obviously trying very badly to bring in the TOS crowd, rather than go with their own identity. It was amusing how badly they wanted Riker to be Kirk at some points.

There were some truly dire episodes

I remember when I was watching the whole series again with my friend on his purchased DVDs, the one episode that truly sticks out as excruciating to sit through was the clip show episode. I believe it was the Season 2 finale maybe, because of the writer’s strike. But anyway, having to sit through a clip show episode of TNG was just … oh my god. And it wasn’t even a good clip show!!

Yeah, the clip show so early in the series run didn’t help either. It reminds me of the only genius-level joke in the Clerks animated show; the clip show being in the second episode of the series! Gawd, I love that bit so much.

Shades of Grey, end of Season 2. Surely someone has done a 50 Shades / TNG mashup, right? Wait, I don’t actually want to know.

To be honest, I think even that was better than Angel One. Or that really terrible one in Season 7 where Dr Crusher has sex with a ghost. Or something.

They were obviously trying very badly to bring in the TOS crowd, rather than go with their own identity. It was amusing how badly they wanted Riker to be Kirk at some points.

A fair number of the scripts for S1 of TNG had originally been written for “Star Trek Phase 2”, the failed attempt to bring the original show with the original cast back in the mid-70s. The original scripts were thus written by some of the TOS writers ten or fifteen years before TNG aired. Riker was essentially what the “Decker” role from ST:TMP was supposed to have been in “Phase 2”.

TNG Season 1 had some scripts that might have worked as 70s camp but which barely limped past the finish line in the 80s as a semi-serious sci-fi show. The Red Letter Media guys said something along the lines of “This late 1980s TV show was written in the early 1970s by writers who were born in the 1930s,” and it shows – especially with the first season’s treatment of the female characters.

Everything got a LOT better in Season 2 as they sidelined Roddenberry and started to get scripts for contemporary writers.

I think Roddenborry also demanded that there be no conflict between the crew members, which led to a really flat dynamic.

It’s not just flat dynamics but the way writers deal with this limitation. Half of TOS and a lot of TNG stories are about mindcontrol, posession and things like that. DS9 is a similar show but it only has such episodes when it’s dealing with shapeshifters and spies.

I watched the second Ferengi episode last night, which is the first I would describe as a genuinely Star Trek episode, but also about mind control, and even it went horribly off the rails toward the end.

I did start watching the pilot episode last night, but I only got through the intro. I haven’t seen that intro in a long long time. I’d forgotten that the original Intro started with our Solar system. I like it a lot. Great intro.

The best reason to watch TNG. 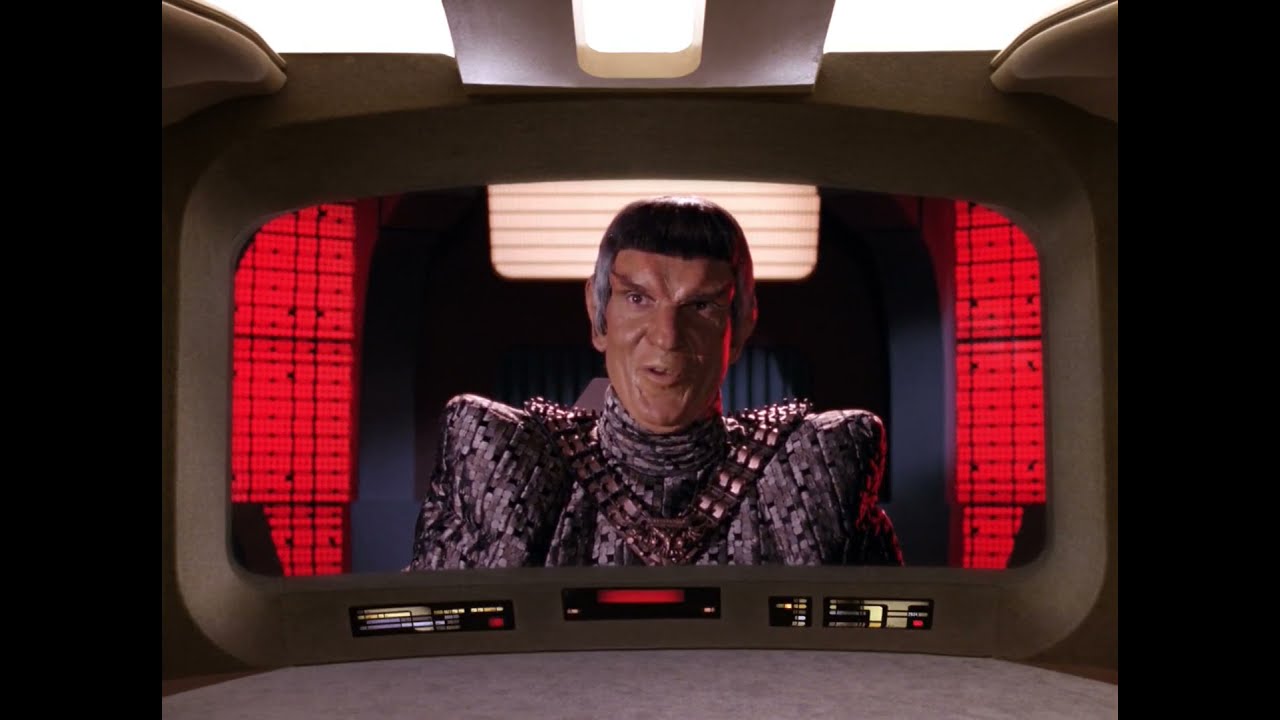 Tomalak should have been more worried about the Centauri threat rather than harassing the Enterprise.

You know, that makes sense to me. I never put the two together, but the same actor…

The Naked Now
I’ve always hated this episode and after a re-watch, I still hate it. It starts off ok, but get progressively worse as the crew become more and more drunk. Why oh why is this the 3rd episode. It’s all about these characters acting in ways that are not normal for them. But we as an audience don’t know the characters yet (heck, the actors don’t know their characters yet.) But at least we all now know that Data is fully functional.

Nice to know that these very important control chip panels are sitting out in the open near the floor where anyone could accidentally kick them. 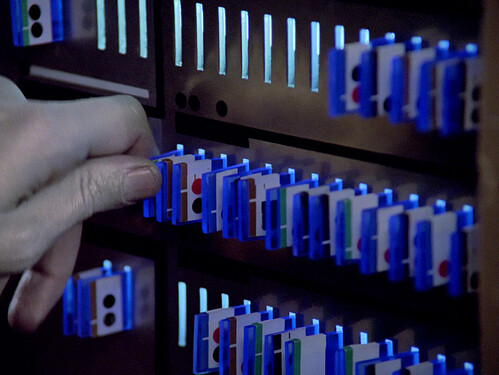 Can someone tell me what’s going on with Picard’s voice at the 0.55 mark? 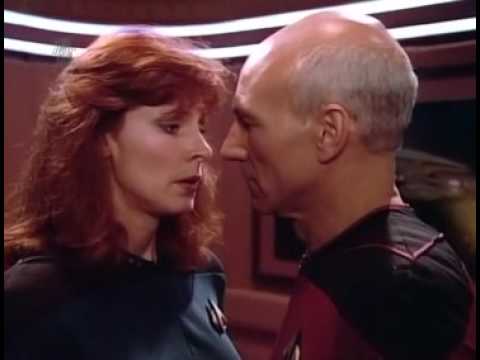 Easily one of the worst episodes. As is the next one…

See above where I note that you have writers born in the 30s writing a script in the 70s that won’t be filmed until the 80s. Every single female character goes man-crazy and throws themselves at the nearest penis (natural or synthetic), while the men all strive to do the right thing through their drunken haze.

Apparently, DC Fontana had her name removed from the credits (it’s replaced with “J. Michael Bingham”) because she objected to the wholesale re-writes… which just leaves you to wonder if the sexist stuff was inserted as part of the re-writes, or whether Fontana had them in there from the start.

It’s all about these characters acting in ways that are not normal for them. But we as an audience don’t know the characters yet

The TOS “Naked Time” actually worked OK as an early episode because it was not played (entirely) for laughs – how the various crew members acted showed some up-to-then hidden facets of their characters: Spock shows emotions; Sulu envisions himself as a swashbuckling hero; Kirk’s struggles, etc. This weak re-do doesn’t explore anyone to any real degree… people just act like dumbasses.

Admittedly I haven’t re-watched The Naked Now, so it’s been 30+ years since I’ve seen it, but as I recall one of the little things I did like is that when the original event is researched, it sounds like the adventures of the TOS crew were just a minor footnote in Federation history.

Or am I remembering it wrong?

Nice to know that these very important control chip panels are sitting out in the open near the floor where anyone could accidentally kick them. 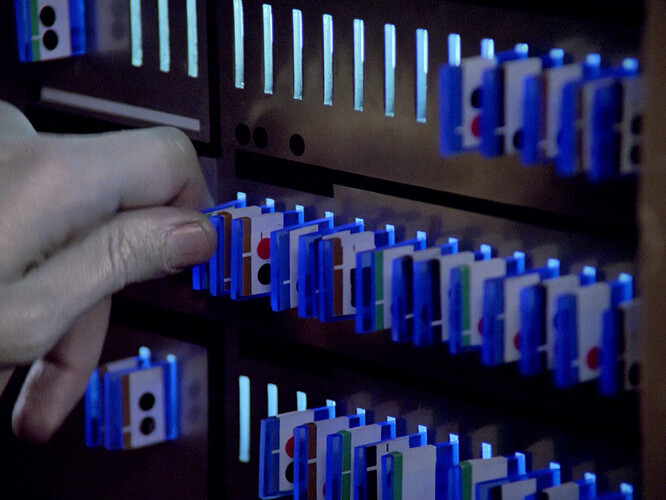 Oh, man. I know it’s a budget/time thing, but it always bugged me how these chips just slide in and out with nothing really holding them in place.