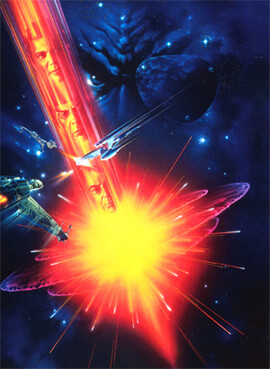 And here we come to the end of our journey together of the original crew of Star Trek. Kind of. Star Trek VI: The Undiscovered Country is a 1991 American science fiction film directed by Nicholas Meyer. It is the sixth feature film based on Star Trek, and a sequel to the 1966–1969 Star Trek television series. Taking place after the events of Star Trek V: The Final Frontier, it is the final film featuring the entire cast of the original series. The destruction of the Klingon moon Praxis leads the Klingon Empire to pursue peace with their longtime adversary the Federation; the crew of the U...

The sixth film in the series was initially planned as a prequel to the original series, with younger actors portraying the crew of the Enterprise while attending Starfleet Academy, but the idea was discarded because of negative reaction from the original cast and the fans. Faced with producing a new film in time for Star Trek 's 25th anniversary, Meyer, who previously directed Star Trek II: The Wrath of Khan (1982), and Denny Martin Flinn wrote a script based on a suggestion from Leonard Nimoy about what would happen if “the Wall came down in space”, touching on the contemporary events of the Cold War.

I watched it in the theater the day it came out. The Next Generation was on the air at the time, and I was a big fan. I wasn’t really familiar with the Original crew as much, so while I enjoyed the movie, I didn’t understand why this was a movie while something of similar quality was on the air every week on TV in Next Gen. You have to understand, Star Trek: TNG had just finished airing it’s 4th Season, (and was in the middle of it’s excellent 5th season) it was in its prime and firing on all cylinders by that point, so I’m not going to blame me from 1991 from feeling this way.

But in retrospect, of course, looking at it from the perspective of The Original Series, this was definitely my favorite episode/movie/game with the original crew.

Now it’s time to re-watch it and see if that holds up!

Once more unto the breach, dear friends.

On this rewatch, I was surprised at how little screentime Khan actually had in Star Trek II. Hopefully that won’t be the case with Chang. He looms rather large in my memory, but I think justifiably so. We shall see.

IF you want more Chang, track down Klingon Academy. It has both him and David Warner reprising his role as Gorkon, and takes place before this movie.

I own that! I got it on launch day. I never installed it though, and my new computer doesn’t even have a DVD drive. :(

Man you should have an external for times like this. C’mon. It’s abandonware though, so when you get it, be sure to use these patches:

I like Star Trek VI, it’s definitely worth watching whenever it’s on, but it’s always seemed just a little off to me. Just a little overstuffed, a little too much shaggy dog going on. That whole side trip to the prison planet could be cut out completely and I wouldn’t miss it. The ‘mystery that isn’t really a mystery’ of who killed Gorkon is weirdly paced. The thing with the assassination plot at the end, what was that all about? Why would the Klingon Empire and Federation conspire to kill the president? None of it derails the movie completely, it just throws the movie off a bit for my liking.

And if you want to find out what could have been, check out Walter Koenig’s pitch for ST VI.

The sixth and final movie that included all of the cast from Star Trek: The Original Series, Star Trek VI: The Undiscovered Country was a conglomeration of...

Why would the Klingon Empire and Federation conspire to kill the president?

Certain people want to keep the war going because people can be very scared of change.

Star Trek VI came out right after the fall of the Soviet Union, and it’s very much a product of its time. People wanted to believe that Russia and America would be friends, and there was a brief boom in thrillers about reactionary Cold War warmongers trying to keep the conflict going. The Package with Gene Hackman and Tommy Lee Jones was the most memorable, and featured a similar conspiracy between generals on both sides to assassinate a leader and thereby restart the Cold War.

You just kind of have to twist yourself in knots to make that logic work, though. ‘You and I, we’re enemies - so let’s work together so that we can keep being enemies.’

They’re not personally enemies. It’s not a huge stretch to imagine people with a designated and high place in a certain order conspiring to maintain that order in the face of a future that may not need them.

I find it a bit of a stretch, personally.

My favorite thing from the OG crew.

Boy, did I enjoy this movie when it came out. I grew up loving the original series (in reruns! I’m not that old), and this was a wonderful farewell to that crew.

As @Kyle_Wilson1 observed, the movie is a product of its time. The Iron Curtain had fallen, and we were filled with hope and trepidation about what would come next. The Undiscovered Country captured those competing impulses while staying true to the idealism at the heart of the original series.

It’s not a perfect movie by any means, but it remains an all-time personal favorite of mine. I still remember watching it in the theater with my mom, who also loves Star Trek. In fact, I’m seeing my mom next week for the first time in more than a year. Maybe we’ll watch this together.

I love the humor in this one; it’s much more subtle and true to the characters (especially when coming right after the buffoonery of STV). Spock noting “I’ve been dead before” immediately comes to mind.

I find it a bit of a stretch, personally.

I find YOU a bit of a stretch, personally.

I admit, as time has passed I’ve grown to love VI more than II. That torpedo scene, so good gif.