So, inspired by this week’s Star Trek: Strange New Worlds and @tomchick 's love of Star Wars, I have come up with… STAR WARS BINGO.

This entirely my own creation and I take responsibility for any idiocy or errors:

B: Have you watched every single Star Wars movie, tv show, animated series, and special that was officially released in your country of residence? (This criteria can also be met by watching the original Star Wars at least 20 times in a theater, or any combination of full viewings of any Star Wars films on any media, at least 100 times.

I: Have you dressed up as a Storm Trooper? (This criteria can also be met by performing a dance move, in view of other people, whilst wearing any form of recognizable Star Wars regalia.)

N: Have you played Knights of the Old Republic I and II, both light side and dark side, to completion, including at least one run with the Sith Lords Restoration Mod? (This criteria can also be met by achieving max level, both light side and dark side, Old Republic Online, or by logging 500+ hours in any single Star Wars game on any platform, or 2,000+ hours combined on any Star Wars games on any platforms.)

Huh, I came up with a big ol’ goose egg here. Guess I’m not a Star Wars fan at all!

Lets see. B. Han Solo I. NNNN. Alternate G. and 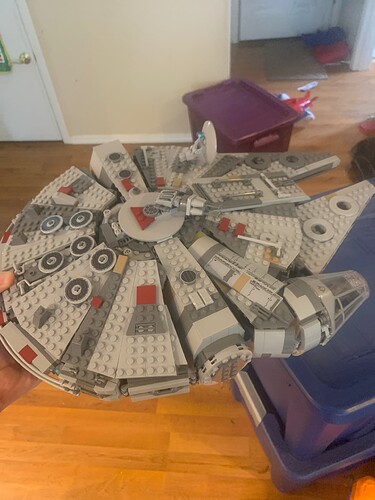 Nothing for me either. But to be fair, I wasn’t a Star Wars fan until I saw Last Jedi, so that makes sense.

Still, things have changed since Last Jedi! I’m now working on completing B. I’ll likely work on N after that when I try to finish KOTOR2 with the Sith Lords Restoration mod. Originally I finished KOTOR1, and did about 80% of KOTOR2.

2 out of 5 won’t be bad, right? I’m not interested in dioramas, cosplay or comics, so no plans on doing the rest. :P

Oh hey, if we can declare alternates, how about these? I saw each of the original trilogy films on opening night! I still have a paperback copy of the sequel to the first movie (pre-Empire), Splinter of the Mind’s Eye! I have a photograph of myself with Chewbacca!

I have a photograph of myself with Chewbacca!

That counts for I. I have spoken.

I still have a paperback copy of the sequel to the first movie (pre-Empire), Splinter of the Mind’s Eye!

If you also have paperbacks of the Han Solo Authority adventure series by Brian Daley, I’ll allow it for G.

Note, this was intended to be a fairly “hardcore” list but not impossible. The response thus far has heartening. May the Force be with you all.

Ooooh, I love this idea! Let’s do it!

…uh, my score was zero. Can I have a half point for inspiring Sparky to create an awesome “Fuck Star Wars!” logo back in the day? What about a half point for actually holding George Lucas’ Oscars in my own hands*? Or can we do Jaws Bingo next?

Feel free to rock forth with Jaws Bingo or other fan bingos that float your boat.

Close to a B: In the 80s I watched Star Wars on cable several dozen times, no idea how many. Haven’t seen Solo, haven’t watched any tv series.

No I. Always wanted to cosplay as Lobot, because I bear a resemblance. But never have.

Alternate N. I played 1 hour of KOTOR and just did. not. get. it. Boy, is that combat awful. X-Wing and TIE Fighter, on the other hand… I probably hit 500 hours combined, and I’m going to say that counts. Also, I played the shit out of Yoda Stories!

No G. I know who Thrawn is because he shows up in TIE Fighter.

Partial O: I have helped construct a big Death Star and Star Destroyer, but didn’t complete them myself. I own an original Gonk droid action figure.

Although I admit my Sith Lords Resto Mod playthrough hit an unskipable bug halfway through.

And nothing about the WEG RPG, including a hand written letter from one on the designers? For shame.

No letters for me. I feel so un-nerdly.

However, I was taken to see Star Wars during its original run by a nun (Sister Maria, who “didn’t know there’d be so many shoot-em-ups!”), so I figure I’ve got some cosmic bingo going somewhere…

Never did any cosplay, not even for Halloween. But I DO drink my coffee out of a stormtrooper helmet mug, so that’s something, right?