The NYT review linked above has zero spoilers.

Good review from A.A. Dowd over at The A.V. Club for whom, if you’re familiar with him, B+ is a pretty high grade.

The Last Jedi locates that middle-chapter, Empire Strikes Back mojo

@Knightsaber is telling me on Steam some lady on a talk show just blabbed about the ending to the movie. Seems super shitty to me, given it’s not actually out yet. I’d say be careful where you go but even random talk shows are just spoilering things now, I guess. 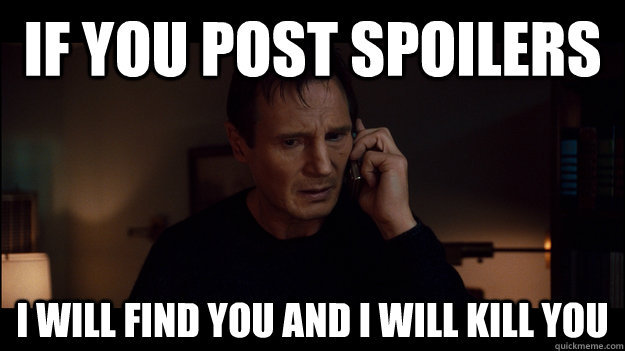 I hope one of you jokers makes a spoiler thread then. All the reviews I’m reading have got me curious.

I hope one of you jokers makes a spoiler thread then. All the reviews I’m reading have got me curious.

I don’t particularly mind, but the 1st sentence of your quoted Paste Magazine review has a small spoiler of a moment I’d rather have 1st experienced in the theater.

I’ll stay out of this thread 'til I get home Friday night. :)

Looking at this thread is like looking at the sun. You don’t stare at it; it’s too risky. You get a sense of it then you look away!

I know I’m the odd one out, but I’m actually going to Wikipedia and looking for spoilers. More the merrier! Perhap there should be a new spoiler thread? I cbf going to cinema (I have to wear pants) and retail release is too far away.

Time to change this thread from Tracking to Normal (maybe muted).

Hey, look, if you don’t want to know about Jar Jar Binks being the real Emperor Snoke, and how Finn was really a secret Resustance operative all along, I don’t know why you ever bothered to click this thread in the first place 😉

But, though I am not spoiler averse, it may be a good idea for a spoiler thread so we can satisfy the safety of some more sensitive members.

Thoughts on THE LAST JEDI: - way more nudity than expected - smart idea to do it all as a rap - Charlie Sheen totally holds his own - Adam Driver's love ballad felt awkward - didn't like the 22-minute Olaf short - Smash Mouth's "All Star" was a bold end-credits choice
John_Reynolds December 13, 2017, 2:58pm #312

The boy and I have tickets for Sat morning. Here’s hoping it’s not a retread of Empire like Force was for the original movie.

Wow. looks like reviews are basically saying “the opposite of The Force Awakens”, which is kind of the exact thing that would make me consider seeing this. However, I can’t help but feel like I’m being tricked, somehow.

I can’t recall if George Lucas was complimentary about Abrams film, but he seems quite taken with Johnson’s sequel.

George Lucas Thinks 'The Last Jedi' Was "Beautifully Made"

Lucas spoke with director Rian Johnson after the screening.

I saw a midnight showing last night (no spoilers).

After it was over, me and my friends just looked at each other and sort of went “Hmm”. It’s definitely interesting, but I’m not sure yet whether I like it. I’ve never been so conflicted about a Star Wars movie.

I’m looking forward to discussing it when more people have seen it.

Coming from someone who didn’t care for The Force Awakens, I thought the sequel was pretty good. I definitely had the impression this film had a filmmaker at the helm who wasn’t afraid of putting his own stamp on the licence. There were a few too many winks at the audience and cutaways gags as you would expect from contemporary Disney productions, and one moment so poorly executed that you could hear the entire theater shift uncomfortably in their seats, but overall I really appreciated the editing, striking production design, and the inspired sound work. I’m glad I saw it.

I saw it today. I thought it was 30-40 minutes of fairly entertaining movie stretched to 2.5 hours. They could have easily removed an hour with no noticeable loss in quality. I did enjoy some of the character progression and the overall story theme but the few action sequences felt flat. I missed the kinetic energy of The Force Awakens which although doesn’t hold up well under repeat viewings at least meant I was never bored during the first viewing. I lost count of the amount of times I looked at my watch for this one.
4.5/10

I had fun watching the movie. Good action sequences, some pretty satisfying character development, interesting ambiguity about where exactly the plot was going, and much less nostalgic fan service than in The Force Awakens. Also the visual trick they use for the final battle sequence is just sooo good.

But every part of the movie disintegrates at even a cursory inspection. It’s like a second-order idiot plot: the movie only works when everyone in the movie is a total moron, and know that everyone else is a total moron too. I’m particularly unhappy about the plot twist they used to solve the big problem 2/3rds of the way through. A fictional universe with those rules just makes no sense: it should have totally self-destructed by now.

Does that make it more or less dumb than the First Order?