Email I got today, says this will release in early spring, thanks to some extra funding they received.

So… they’ll announce the release date on April 3rd, and they said it shouldn’t be long after that, so that means the final release will most likely be in April.

More info (including a new game mode) below:

Mjolnir Squad is ready for you. You better bring your own thunder... Hey everyone, Thunderflux here! Thanks for all the great feedback on the new abilities and changes in Tipsy Tarantula - there's two big things coming soon, so let’s get right to it:...

This is out today, and has been on my wishlist for years. Anyone jumping in? The initial steam reviews are positive (95% of 168 reviews so far), which is a great start. And the price is right at only twenty bucks!

I bought it in Early Access and played it a bit recently. I think it’s pretty good, but I was waiting for the final release to really dive in, so I don’t really know how the mid/late game feels. The first few hours are pretty good though.

I’m a backer & installing now. I’ll give some impressions late tonight or tomorrow. (I don’t play pre-release games so have yet to give it a shot)

Tony is streaming this right now:

So this is neat for the first few hours. It’s a party based light rpg where you do quests and do battle while searching shops and/or offices that all look eerily similar. You open doors and you get to do a turn based battle without any movement. It cycles through enemies and party members and you pick abilities and weapons to use with your action points. ( which to date only allow one thing per member so far)

It’s minimalistic as when you encounter some foe, the environment is magically replaced with a standard battle screen that is almost identical to every battle and once you’ve vanquished your foes, the screen changes back to where you were at. It’s pretty jarring actually but over time I’ve gotten used to it.

Movement within the environment is again very basic. You have wasdqe keys but you move what I would term a block with each key press so you don’t have finite control. It’s very grid based - no diagonal allowed!

There are about 20 factions that you gain/loose rep with although I’m so early I’m not quite sure what the ultimate goal is. Right now I’m stealing and pissing off everyone to get credits to increase my party size although these can be offset by doing missions they post on the job board.

Traits or abilities for each party member is very extensive with a very deep tech tree that necessitates decision making although the option to reset exists ( for credits) so you aren’t technically locked into your choices.

I’m glad I backed it but I’m kind of disappointed in the repetitiveness of the battles. Time will tell how the abilities develop with levels and if you can utilize the party makeup to be creative or if it just devolves into doing as much damage as possible.

Scratch the turn based dungeon crawl itch of mine seems really good and polished compared to some of the titles I tried out recently.

But having everything in cyberpunk setting is really disorienting when it comes to skill and weapons selection. Who’s the healer, who’s the tank. No idea except to read the forums or trial it out.

I’ve leveled my core group up to 6 and I’d say there is no tank so far. I took the engineer as my main and he can deploy these bots that do small damage to everything on the screen, The soldier has a bouncing betty and grenade that do area damage to 2-3 enemies depending upon how close they are. Soldier can also taunt, but not sure how useful that tree is.

The real gap so far is any kind of healer - you have health consumables that can be applied out of battle, so wise to use these when you’re wondering around instead of having to waste a turn during battle.

You get a LOT of choices in this game. You can decide whether to screw over a faction, whether to steal things, which hurts your rep. So far, and I’m still at a very early stage, it appears that you get missions from factions that like you more easily. I screwed one faction over and gave some free med supplies to a suffering colony. About 3 missions later, I got contacted by a mysterious rep with another polite ask, so I’ll see where this goes.

Bottom line, with the deep tech tree, the varied party members, and you can only take 4, so leveling them up is something you need to consider wisely, and the sheer number of jobs on the job board (which are all nicely color coded along with credit amounts for selecting what you want to do), the black market, the upgrades on armor, shields & weapons, this game has got a huge number of decisions you need to do.

The game is completely solid - a bit wanky on the movement / battles like I mentioned previously, but completely solid, with no bugs at all so far for me. Liking this more & more.

btw - here is a sequence of 3 shots to show you the wankiness of the battle screens and how they don’t quite line up - I’m sure this was done to save time and just have a standard battle screen for each “type” of area instead of making it accurate. Small nitpick but it is a bit jarring the first few times:

Hey what’s that behind the wall? 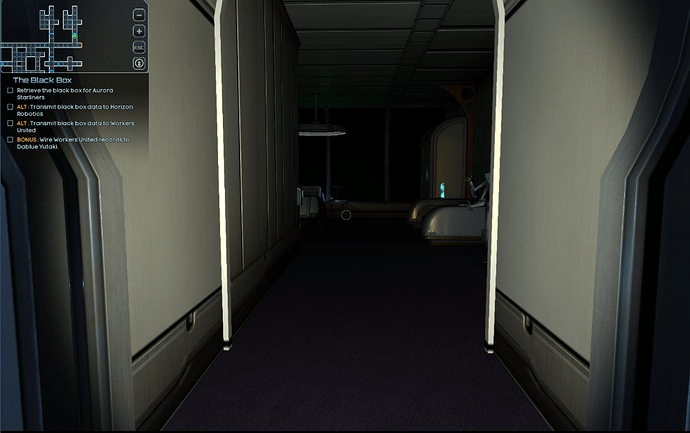 Move a few more blocks and the battle screen is automatically initiated: 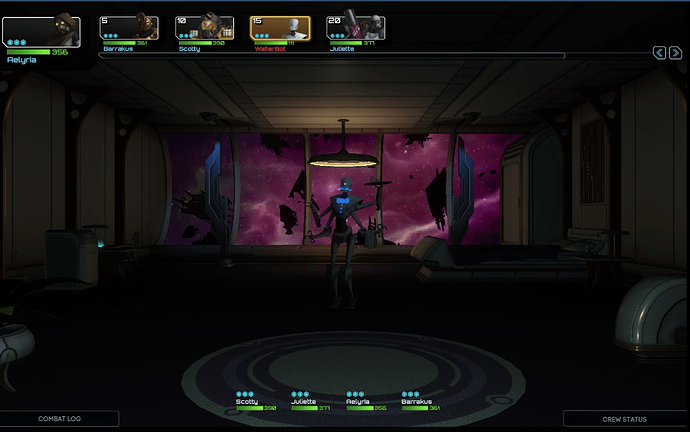 Post battle, it’s back to the now empty room - which is obviously not the same room as the battle… 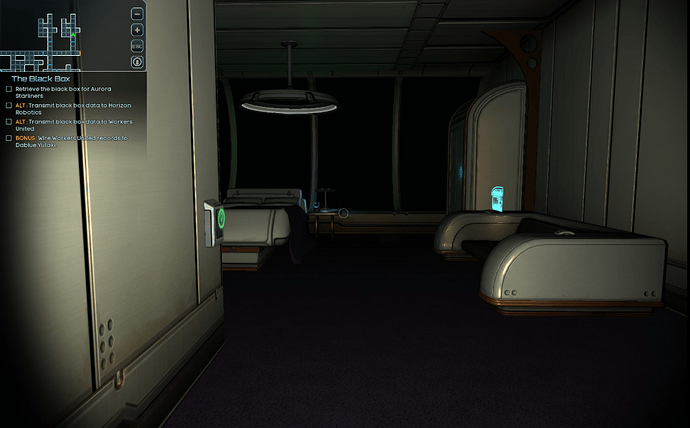 Soldier with the Left Tree seems to be tankish. With Taunt in his attacks.

Unfortunately, I’m unable to keep him alive with the amount of incoming damage after he draws aggro.

Scratch the turn based dungeon crawl itch of mine seems really good and polished compared to some of the titles I tried out recently.

But having everything in cyberpunk setting is really disorienting when it comes to skill and weapons selection. Who’s the healer, who’s the tank. No idea except to read the forums or trial it out.

Yeah, I’m a sucker for blobbers like this and having it in a sci-fi/cyberpunk setting is just icing on the cake. I picked it up yesterday from GOG (on sale there as well) and have finished a few missions so far.

I picked a hacker for my first character because it looks like they’re the healer. The tree on the right seems to have a few good healing skills including group healing. They also look like they might do good damage with viruses.

I have just enough cash to hire a second character now and I’m leaning towards the ninja for CC and survivability. As for tanks, it looks like the soldier would be the tank. At least, I think one of his skill trees looks tankish. I thought I was going to get the rogue illegal AI prototype I found in the first mission but I guess the store lady hasn’t repaired him for me yet. I’m hoping he may be tankish as well but who knows. The Psykers look very interesting to me so maybe I’ll look at them too.

Up to level 7 with my crew now. God, I love this game. It has almost everything I like in it. My only quibble so far is the smallish inventory and no “sort” button. It’s so addictive though. I’ve been torn between this and Endless Space 2 and this is winning.

I played it quite a bit in beta and a bit more just now. The game is still fun but i wonder about long term fun as it did seem to get repetitive in the past.

I don’t regret backing this game decades ago.

Up to level 7 with my crew now. God, I love this game. It has almost everything I like in it. My only quibble so far is the smallish inventory and no “sort” button. I

did you see the stash button in the bar? You can store things in there.

did you see the stash button in the bar? You can store things in there.

Yes, I did. That’s why it’s just a quibble. Thank god for the stash. Before I found that inventory mas a major irritation since I have so many crafting items to store. I do wish the stash was a bit larger, though. Or than medkits would stack, that would help a lot.