Since I’m totally unqualified to speak to the legal legitimacy of any of these recent actions, I will only speak to the hearts-and-minds-of-Star-Control-fanboys side of the equation by saying:

Stardock has lost all my support and goodwill based off this (from the article): “Stardock wants an injunction against Ford and Reiche producing any Star Control-ish game.” Wow, that’s shitty, guys. I know that Brad Wardell understands how video games are inspired (e.g., Titan Quest : Diablo), how ideas get picked up and recycled and revived (Stardew Valley, anyone?), and how beloved games adhere to the people who were instrumental in creating them long after the companies and franchises themselves have faded into history (CliffyB?). Don’t stop some dudes–who you supposedly admire–from making a video game.

I was excited for two Star Control-ish games to get made. What Stardock are doing sounds like an interesting take on the franchise. I wanted to play it. I STILL want to play it. I don’t know when the heck P&F might have something of their own–I bet it’s a long way off. But of course I want to play that too. Speaking as a fan, P&F’s announcement didn’t damage my interest or enthusiasm for what Stardock had in the works. What’s damaged it is their shitty, disrespectful, litigious attitude.

Well it is the company that blamed a female employee, that filed a lawsuit, for Elemental War of Magic right?

Stardock wants an injunction against Ford and Reiche producing any Star Control-ish game.”

Is that due to protecting their claim to the rights? Similar to how you lose your trademark if you don’t defend it?

I honestly have no clue. That’s definitely a question, not a theory I’m putting forward. It’s just that Brad was vocally supportive of the Ford and Reiche’s game. Pretty sure he even announced it to everyone here in this thread… so something in the formula has clearly changed.

You can read the original complaint here:

You will note that it makes no claims of ownership on characters or plot line or source code.

I admit to being rather curious if Stardock had obtained a copy of the 1988 agreement referenced but not included in their filing, which was included as an exhibit in the counterclaim, before signing the asset purchase agreement with Atari. And if so, what the legal review of it said.

I am pretty sure their copy of that agreement came from us.

It’s not relevant to Stardock’s complaint because it’s purely about trademark.

Now, if Star Control: Origins had the Ur-Quan and Spathi and such, then that agreement would matter because then it came down to who owns it. My personal public position has been and continues to be that Stardock does not own any of those characters or stories. So there’s really nothing to dispute.

If they had a problem with the old games being sold online, then why wasn’t that dealt with years ago? Why now? I love the classic games but you can download UQM for free online. The sales on the classic series is a handful of units a month at most.

But it didn’t seem shaky at the time they were put up for sale, right?

That decision was made before we even acquired it from Atari. So why be mad at us?

Just to drive that point home:

After Stardock acquired the rights to Star Control – where SC 1,2,3 were already being sold digitally btw and had for some time, it had this conversation with Paul and Fred: 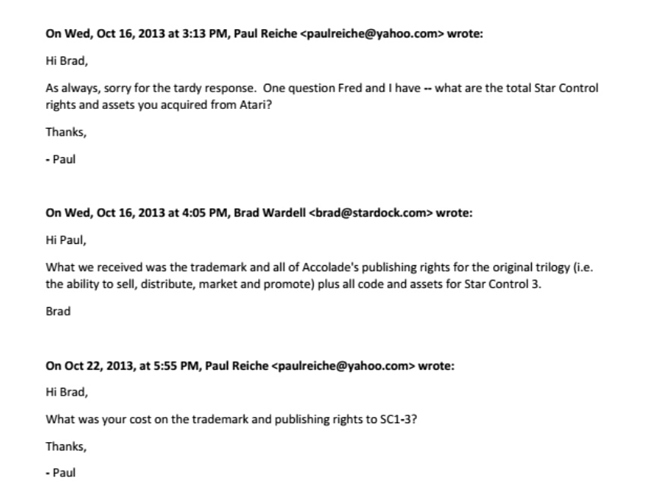 (this is literally exhibit E from the complaint)

So if selling the classic games online was “shaky”, 2013 would have been a good time to bring it up.

Oh, not mad (that looks to be the Star Control fan upthread), just fascinated.

Star Control: The Ur-Quan masters was published on Steam by Stardock when exactly? I’m just looking over the 1988 agreement and the Stardock/Atari purchase agreement and being a bit boggled at whatever review led to the conclusion that would include distribution rights, much less distribution without a contractual agreement with the present copyright/IP holder.

Exhibit E doesn’t really mean much here. If they had previously negotiated an agreement for the digital sales on GOG in 2011, even if one assumes that they might agree that Stardock had acquired the ability to enter into a distribution agreement with them, it doesn’t mean that they have entered into an agreement with Stardock that covers, well, say putting Star Control up on Steam with Stardock as the publisher. Or to put it bluntly: they were busy running Skylanders and assumed if you wanted to put the original games up for sale you’d contact them about doing a distribution agreement like they had previously done with GOG.

I don’t see any communication between the parties about anything like that in the Stardock filing.

I might add, if Stardock only actually published the old games in 2017, around the time Star Control Origins went up for pre-order, then Stardock might open themselves up to charges that they are marketing something they don’t actually have the rights to market in order to boost visibility and desirability of their own product.

At least, if lawsuits were flying, that’s what I’d be worried about at this juncture.

I dunno, it seems pretty crystal clear to me. I’m no lawyer but I know what the IP lawyers have said.

Well, they are certainly going to get a lot of billable hours out of their advice!

Paul and Fred owns the IP of Star Control. Additionally they want to be able to sell SC1-3 online.

Stardock disputes that right. It claims the right to sell SC1-3 for itself.

I think that 3 is not really in dispute, no one wants it but Stardock has it. :)

Paul and Fred owns the IP of Star Control. Additionally they want to be able to sell SC1-3 online.

Stardock disputes that right. It claims the right to sell SC1-3 for itself.

Stardock owns the trademark to Star Control. That means they own everything associated with Star Control other than what is explicitly exempted.

Paul and Fred claim to own copyrights to source code, characters, and settings that they licensed to Accolade in 1988 for the sale and distribution within Star Control.

Paul and Fred claim that this license agreement expired in 2002 and therefore the game should not have been being distributed after that point but it was.

Paul and Fred then objected to the continued sale of the DOS games and demanded that the titles be removed from Steam and GOG and filed a DMCA against Steam and GOG to remove them (including Star Control 3 which they weren’t involved with) but were unable to demonstrate any legal standing and the titles were reinstated.

In response, Stardock filed a complaint in federal court over the continued trademark infringement by Paul and Fred by doing PR around Ghosts and insisting that it is the “true sequel” to Star Control II.

Paul and Fred then responded by countersuing for copyright infringement because the DOS games being sold on Steam and GOG contain their copyrighted characters and story under the legal theory that the original licensing agreement has expired.

That’s my best crack at it. Bear in mind, I’m biased but I think that’s a reasonable summation of events.

Not entirely. But please bear in mind that I can be wrong here as IANAL and all that. Also, some of this is coming from the Ars article.

Paul and Fred owns the IP of Star Control.

Ownership is disputed by both parties. This is more important for the games in development than the existing titles.

Additionally they want to be able to sell SC1-3 online.

They already are, according to the Ars Article:

And then there’s GOG, which actually was selling Star Control and Star Control II back in 2011. GOG claimed it was selling the titles under an existing agreement with Atari, but Ford and Reiche notified GOG that Atari didn’t have the power to make such an agreement because Reiche owned the games’ copyrights. According to the counterclaim, GOG questioned Atari on this point, and Atari—after consulting its attorneys—agreed that Ford and Reiche were correct. The parties then renegotiated a distribution agreement that cut Ford and Reiche into the royalties, and GOG resumed selling the titles.

Stardock is the one selling them on Steam, which they started doing after the alleged purchase of the license. The purchase is disputed because of a previous agreement that allegedly already gave the rights to Ford and Reiche (or just Reiche, I’m not 100% clear on who owns what) when Accolade went belly up.

Mind you, that’s going to get determined legally. But that seems to be their claim.

The bigger stake is who is allowed to make a new game called Star Control, I think. But both sides are saying the other shouldn’t be selling any of 1-3 now.

I am not in a position to answer this question.

Thanks for the explaination. Hope you guys can settle. Seems to me like case of escalation and retailation that started with Stardock having to defend the usage of the trademark.

The points you presented, e.g. regarding sales on Gog etc, contradict the way Brad presented it. Hmmm.