Vote for my favorite game, bro.

Steam let’s me nominate Shadow Empire also, even though I thought it was a 2020 release

It was but very late to Steam, December 3rd, and what with the nominations going on now games that come out after must be grandfathered into next year.

As is the case in most years I don’t think I bought anything new in 2021. Horizon Zero Dawn and Star Wars Fallen Jedi came out earlier.

After very little consideration, these are my picks:

I haven’t actually played a VR game this year, but you get a miniscule reward for filling in everything and I’m sure @lordkosc wouldn’t lie to me.

It had a whip in it, thus it cannot be a bad game.

Well I guess it’s a good thing I just bought Chernobylite snd Eye of the Temple!

You are the best at buying games I nominated! ;)

Every year I’m disappointed by what gets nominated and then disappointed again by what wins, but what the hell?

I don’t VR, so I just picked a game whose non-VR incarnation I enjoy. I Was totally lost for the soundtrack category this year (nothing I’ve played stood out in this regard) so did the laziest possible thing and nominated ME:LE. I haven’t really had time to delve into Pathfinder: WOR but having Kickstarted it I still trust it’s pretty great. Other than those, I stand by everything here as something I played and enjoyed this year.

I’m somewhat annoyed I couldn’t find a place for Riftbreaker in here, though. Suggestions welcome.

Nope, no suggestion for Riftbreaker, as much as I do enjoy it. I left it off my nomination list as well.

I’ve not played a great deal from 2021 unfortunately, and apparently you can’t nominate DLC which is a bit pants. 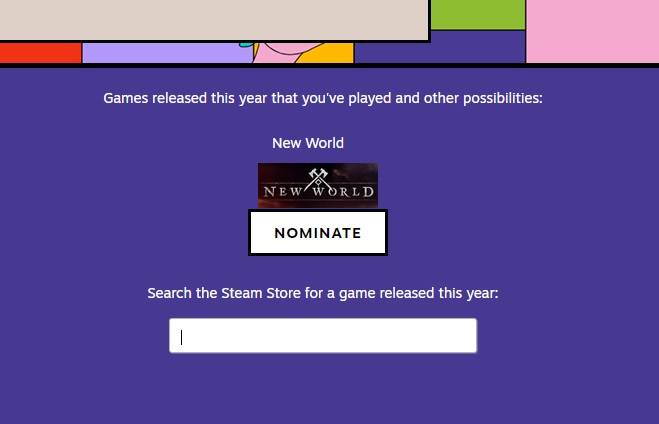 Need to check Gamepass and EGS, but even including them I didn’t play many games released this year. Side effect of having a backlog.

My only suggestion for anything was Days Gone. So that got the votes :)

I think the main point of contention for me was between Outriders and Aliens: FTE. I feel like Outriders is the better game overall with more varied classes, more things to do, and a bit longer lived; it got my GOTY whilst FTE got ‘best with friends’ as consolation. They’ve both had problems but Outriders was somewhat less crippling. I’ve started playing it again this week too with the new content drop.

No Man’s Sky is, and forever will be, deserving of any and all ‘Labour of Love’ awards until such a time as Hello Games get their wings and ascend to a higher plane of existence. Or something.

The Ascent caught me by surprise. There’s soooooo much crammed into the environments it’s crazy. Such fantastic attention to detail for a top-down action RPG. I don’t know if I’d really recommend it otherwise, but fans of this sort of aesthetic are well served.

Old World would’ve definitely taken innovative gameplay here but, well, they’re lying in the bed they made there, I guess. So the deep and deeply flawed Shadow Empire is nominated in its stead.

I suck at Slipways. Why’d I buy this*. It’s great, great enough that I’d have put it into ‘innovation’ if it wasn’t apparently my gaming kryptonite.

For some reason it’s not letting me nominate Doom Eternal: The Ancient Gods for soundtrack (even though it’s an option) so I, uh, chose Mass Effect: LE. I thought Doom: TAG was great even without Mick Gordon on board, but resorting to Mass Effect kinda hints that competition here was slim. Maybe I’ll change it to Deathloop at some point as I liked the vibe it had even if it did get repetitive.

I don’t know if I rate the actual storytelling of Wildermyth that highly as it tends a to come across as too light-hearted at times, but there’s no denying it is a fantastic technical achievement. As whimsical as it may be, it got me to care about characters in a manner I haven’t before.

Finally, after a hard day, what better way than to unwind with some HuniePop 2. It’s a decent match-3*, amongst other things. But who cares about those.

Half my feed is trying to get me to vote for them for “Labor of Love” and most of them it’s the only update I’ve seen this year. I mean, you look at Arcen or Trese Brothers and the support most others are putting out just looks trifling in comparison.

Looking at the auto suggestions really show how few games I bought from Steam this year with me going all in on Gamepass.

If I limit my games to games I own on Steam here’s what I end up with:

Game of the Year: unpacking (spoilers for the Quarterlies!)

Outstanding Visual Style: Behind the Frame

Sit Back and Relax: Fossil Corner (almost went to Townscaper)

ohyou.jpg :)
I am looking forward to playing it.

Game of the Year: Cyberpunk 2077 (I did finish it in january…)
VR Game of the Year: Tetris Effect Connected
Labor of Love: Guardians of the Galaxy
Outstanding Visual Style: The Ascent
Best Game You Suck At: 12 Minutes (had to check walkthrough once)
Outstanding Story-Rich Game: Forgotten City
Sit Back and Relax: The Artful Escape

Huh, I actually finished all these.

There were only three categories I felt strongly about: