LEt’s keep trades in the other steam thread but we need a thread to discuss how to get the achievements on the games each day to get your shot at the loot. 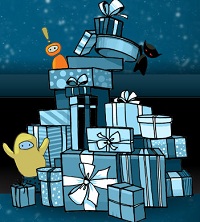 The Great Gift Pile was an event on Steam that started on the 19th of December 2011 and ended on the 2nd of January 2012.

The December levels have snow on the ground. There’s one in each level group:

The 1st normal level, the 6th extended level, and the 1st bonus level. There’s two switches on each level, and they are all in the snow. Just roll your cube over every snow covered square and you’ll get them

The December levels have snow on the ground. There’s one in each level group:

The 1st normal level, the 6th extended level, and the 1st bonus level. There’s two switches on each level, and they are all in the snow. Just roll your cube over every snow covered square and you’ll get them

OK, i found the two switches in the bonus one. Do I have to actually complete the level for it to count? I can’t figure out how the cube gets carried over the second bridge…

I’ve completed the gimme one, Orcs Must Die, and Anomaly (thats a decent game and an easy achievement, btw) and no gifts yet :( How long have they taken for people? I did the first one hours and hours ago.

I think they’re broken. I did the first one (which was supposed to trigger another one) today at 1pm or so (9 hours back). I did the OMD one a couple hours ago now. I’ve only seen the -25% coupon for the very first, and nothing else. There’s a sticky post on the forums saying essentially “We know it’s broken. Leave us alone you assmunches!” Hopefully they’ll get it unbroken soonish.

Yeah, i don’t seem to be getting any gifts either. The only thing i got was the initial -50% on a valve game that is supposed to give you another gift for viewing.

I did OMD one as well.

I think there’s problems with the inventory reporting in general. I still have two different items listed that I traded away.

This happens every sale, there are quirks in the system but it usually resolves itself. I wasn’t getting any gifts at first but now the counter has taken them into account.

OK, I got that cheevo and I am NEVER playing that game again, thanks!

And the system is currently batshit insane, asking me to log in constantly and not showing any gifts. I hope they get it sorted soon, it’s a mess.

It wouldnt be so bad if they didn’t keep flagging me as being on a new computer and making me input a new emailed key, which blows.

I’ve also noticed some funny things with the gifts (not getting a gift after an achievement and a redeemed gift not being removed from the inventory). Fortunately, one of the gifts I did get was Sequence which is surprisingly good and I played for almost 3 hours tonight. Not bad for getting a 10 minute achievement.

If you are on the fence about getting Orcs Must Die, it’s fun and today’s task is very easy.

However, as other people have mentioned, although the achievement was completed, I have not yet received the gift.

My trades are not being tracked at all. I have traded with 2 Q23ers and neither was acknowledged in my inventory and I have not gotten my snowblind reward =(

The switches in EDGE’s snow levels are hidden well, but there’s a slighty gray hue or gradient on those tiles, that’s how you can know.

For Cargo, start a new game (can’t be on an existing profile or in sandbox mode) and just play until you can buy the sail. Attach it to your raft and head out. You’ll see the achievement unlock shortly after.

OK I just did the Orcs with just the sword and the exploding globes but didn’t see an achievement, should I have?

Nevermind, I just redid it with the walls and got the achievement, not sure why I didn’t the first time, maybe cause I was knocked unconscious once without them…

Do we have to get the achievements on the first day, or do we have until the end of the sale?

Do we have to get the achievements on the first day, or do we have until the end of the sale?

It took an hour or two for mine to show up. Seems that their system might be a little bit taxed at the moment.

I’m pretty sure the achievements are going to persist throughout the sale, you can do them whenever you wish before January 2nd for the various rewards. This isn’t like the Treasure Hunt where there was an incentive to do the achievements within the day they were unveiled.