Steam Stuff - What Has the Digital Distribution Giant Done Lately?

I sent a request. Lets see if it bring PoE into your top 10 lol.

Could I play Gloomhaven on Steam with my wife, me at my computer and her using her iPad and the Steam Link app? So, she would control one character and I would control the other just taking when appropriate.

It would be interesting to rank by per player average. People who play the no.2 game on my list spend over twice a long as those playing the no.1 game, for example. And I guess people must leave SteamVR on in the background for hours. 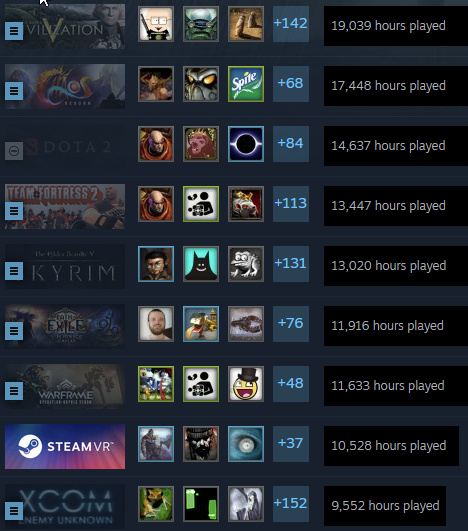 I tried something like that and it didn’t work. Once I moved the mouse on my computer the steam link crashed. However that was on a Apple TV, so it might differ.

Bummer. Maybe still worth a try I guess.I was able to manipulate menu items in Rayman when my son was streaming it to an Android phone.

Remote play together is supposed to let you do exactly that

Firefox would turn SteamVR on in the background silently as part as some web vr feature that was hard to disable whenever it ran, regardless if the hardware was connected. It might still do this.

Remote play together is supposed to let you do exactly that

Don’t the other players need to have their own Steam accounts and own the game, or am I misunderstanding?

Remote play together has one player running the game and streaming to a second player, whose input is captured but who does not separately run the game.

I don’t know if Steam specifically will work for your particular scenario (I do think it requires a second Steam account? Not sure), but it doesn’t require multiple copies of the game. You might also try Parsec, which is similar but has a bit more in the way of options (including 4 player support to Steam’s 2, not that you probably care).

Curious about the Imperator Rome game talked about in this GOG 2021 thread, I decided to check Steam’s price and read a few Steam reviews to get the people’s opinion. I came across this particular review that has a censored word. is it possible that Steam censors “GOG”? I wonder if they also censor Origin, GMG, or Epic. 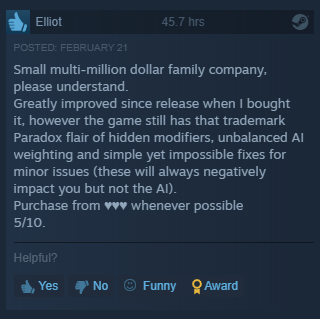 is it possible that Steam censors “GOG”? I wonder if they also censor Origin, GMG, or Epic

Could also be PDS for the Paradox Store. It wouldn’t surprise me at all if Steam censored competitor names in their review system.

I think it’s more likely that the person who reviewed it just censored themselves, but you could try it and see.

I came across this particular review that has a censored word.

I purchase from ass whenever possible too.

One rather annoying thing steam has done lately, is, that I constantly see this…showcasing my absolute lack of willpower in waiting for anything I kinda want :-D 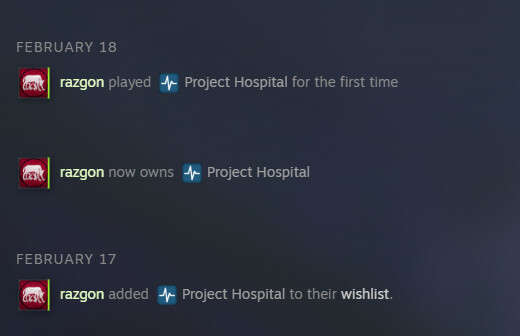 Beat yourself up all you want, but know this: You actually installed and played the game you bought. You’re way ahead of the curve.

What is this “installing”? Have I been doing it wrong all this time?

Now in Beta, you can Remote Play Together with anyone – no Steam account needed to join your game with the click of a link.

I’ll have to try it, thanks!

How does sound work with that… like I haven’t had a chance to try yet but some co-workers tried Zoom and some other things, and they couldn’t get the games sound to work.