Just started a new game with the 3.0 Dick Patch and I can tell you it’s huge! Size really matters. =8-0

Too many changes to have any opinion yet.

Lots of contradictory arguing about the secular stagnation, so it should be about right, just different. I love arguments like “but now killing a 25x crisis is impossible”, though…

EDIT: actually, it’s rather weird, and the game doesn’t directly tell you: housing increases growth, even if it emigrates because there are no jobs. So, make breeder rural planets to feed research/industrial planets by having half as many jobs as planetary capacity. Or a vassal swarm to integrate, I guess.
It does curb the one playstyle to rule them all a bit, though.

Also, the star map doesn’t have an “ocean”, so it limits the number of useful interactions.

This is a great point. It also seems fixable - “voids” across the galaxy joining up multiple factions would really change things.

Yeah definitely fixable. I played around with an idea of warp streams or such that let ships travel quickly around without violating territory. So yeah pretty much some type of voids

The gates and wormholes allow long distance travel but the access points are all controlled by someone.

For the ocean in the starmap, I wonder if that’s even on their radar. I do feel like even with their cluster approach, the galaxy is still way too dense and connected.

Just noticed what looks like a bug in the latest version. Two commanders for the same ship?! 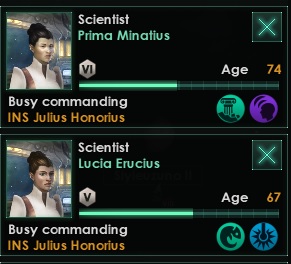 Just noticed what looks like a bug in the latest version. Two commanders for the same ship?!

Are you sure you don’t just have two ships with the same name?

they also look the same. There have to be funny scenes on the bridge, when they are giving contradicting orders. Maybe even mutiny is on the cards.

I’m enjoying 3.0 so far. It feels like Stellaris is finally becoming a grand strategy game, not a weird 4X GS bastard.

The espionage and fog of war on other empire attributes is something I’ve long wanted. Perfect vision would have been jarring after Shadow Empires good treatment of uncertainty. The UI could use a lot of work, but the mechanic is good.

The economy rework also feels like a positive direction. The mechanics between buildings, infrastructure, it feels more logical to me than when we had before. That said, I’m still baffled how a player could want to manage hundreds of planets this way - I prefer lowest habitability to keep my planet count in the low dozens by end game.

The population mechanics are controversial, mostly for sharply reducing growth from the mid game onward. I think they need to tweak this so growth continues, but is slower throughout the entire game, with upgrades most to pop efficiency rather than adding more and more jobs. I think a lot of the whining on the forums and reviews is by platers fixated on how they once had 1000s of pops by end game, but now only 100s, without realizing it’s all an abstraction.

The migration, slavery and robot mechanics clearly aren’t fully updated to reflect the pop changes. Nor are all the jobs output. Once there are a few passes on balancing for this I think the system will shine.

The AI seems much improved on Commodore. Whether that’s because I’m still learn5the new systems, or it’s really better, will be seen in the next few dozen hours. But so far it’s managing to repel me well in wars, and more aggressive in its own.

Overall a pretty good patch from PDX. Not perfect, especially with balancing around the new pop growth mechanics, but quite polished by this games standards.

If we get a really solid leaders/sectors/internal politics update I think that will really boost Stellaris to a new level. It appears they hired the modder of the More Political Events and More Potent Rebellions mods, which did a lot of that work unofficially, so I’m hoping even better versions of that are to come officially.

That’s cool to hear, I’ve heard a lot of good things from a couple people I know that have played it but I haven’t had a chance to dive in yet.

they also look the same. There have to be funny scenes on the bridge, when they are giving contradicting orders. Maybe even mutiny is on the cards.

I looked into it further and there are actually two science ships with the same name. Either way it’s a bug and I reported it. Let Paradox sort it out.

I prefer lowest habitability to keep my planet count in the low dozens by end game.

The population mechanics are controversial, mostly for sharply reducing growth from the mid game onward.

I think there is a connection here - when the growth slowdown kicks in depends a lot on habitability and galaxy size. So a mechanic feels a tad restrictive on low habitability feels much much tougher on higher habitability.

I am sympathetic to people who think they should have cut the base number of pops per planet and adjusted from there. As you say, it’s an abstraction, so having fewer or more pops doesn’t really change anything.

Having the population growth rate decrease with empire size I feel is just a bad mechanic, because it doesn’t make sense. It’s hard to see why you could say triple the growth rate of a set of planets by dividing them into 3 closely-allied empires versus one empire. It doesn’t seem like the implications for some types of empires that can’t conquer pops were thought through.

Yes, I agree about the planet population capacity rebalancing. I think they estimated how many pops (per galaxy) the average player PC could handle and imposed that cap arbitrarily through a nearly hard ceiling via growth slowing sharply. Without adjusting many other numbers to match that sudden brake on pop growth in mid game on the biggest galaxies.

Instead, they should have estimated that max number of pops on the biggest settings (huge galaxy, max planets) and then scale average pop growth rates against that, so that a full galaxy would reach the max within a few decades of the average game end year. On smaller galaxies you still have the same growth rate, but never reach the lagged out max at the galaxy level.

Then, scale all resource output and costs against that. It may sound daunting but it’s work that an intern should be able to do in a week or so.

Instead, they should have estimated that max number of pops on the biggest settings (huge galaxy, max planets) and then scale average pop growth rates against that

I agree with the overall approach, but I think they could also look at sheer pop numbers. Dividing pop numbers by 2 and increasing yields per pop by the same factor would go a long way. So one pop per mining district instead of 2. All housing numbers cut in two, etc. There would be tricky cases where things don’t divide nicely, but I think those are smaller scale and more localised than other potential problems. Then close whatever performance gap you have at end-game by adjusting overall growth rates as desired.

As it is, the population limit really drastically changes things in a large galaxy in ways that I think are much harder to balance than straight up allowing fewer pops per planet.

The new growth mechanic makes colonizing new planets after 80-100 years into a trap for the unwary player. You just don’t have the growth rate anymore to make it worthwhile.

Hmmm. Reading along… Is the new growth mechanic game breaking?

I appreciate the care for the perfomance in my potato, but it has several issues: ring worlds, habitats, ecumenopolis, … are always mostly empty; it’s easily gamed with vassals, raiding, and so on; purging civics or selling slaves are just pretty bad choices; growth modifiers don’t do much; it doesn’t really cut on micro if you care about having free housing for max capacity; some jobs are even more of a waste due to pop cost; and the UX isn’t the best in helping you know how growth/sprawl/housing/amenities/… all fit together to inform your choices; it doesn’t scale with galaxy size, so the larger ones will be pretty empty; enjoy thousands of alloys for one robot.
Reading the forum thread for examples, it has the effect of a blunt tool, but it’s not necessarily unsalvageable (unlike espionage ops, cough). YMMV, I decided not to deal with a beta system and cut the modifier in half, which looks like a good compromise while they figure it out.

YMMV, I decided not to deal with a beta system and cut the modifier in half, which looks like a good compromise while they figure it out.

What mod did you use?

My own, a quick defines.txt with