So if I’m not a xenophobic asshole then people will like me? I wish I had realized that in life before now!

I started a few more games and finally got a decent start. My neighbor is actually my friend!

Thanks for the help.

Haha! That’s great to hear you have a good start going. I’m far from any sort of expert on the game but I did play through a few games recently, so if you have any more questions feel free to post them here and I’ll do my best to try to be of help!

If you’ve completed a single game in Stellaris I think that should qualify you as an expert. I have 100+ hours and have never done that!

Thanks! Anyone here ever play MP? Seems like the game unfolds slowly (at least at the speed I play, heh heh) & it wouldn’t be the best game for it.

I do play MP but it’s with a friend or two. I don’t do any games with random people I don’t know. We tend to adjust the speed depending on how much stuff is going on at the time. If the game needs to be slowed down for one person but the others aren’t in a hectic place, that’s where I enjoy that I’m playing with friends. It’s just hanging out and chilling and making adjustment to ship designs, fine-tuning a planet’s economy, and that sort of thing. :)

Does the 30% mean that I’m winning (and he has 14% and he’s losing)? This appears to show that I am more exhausted than he is. 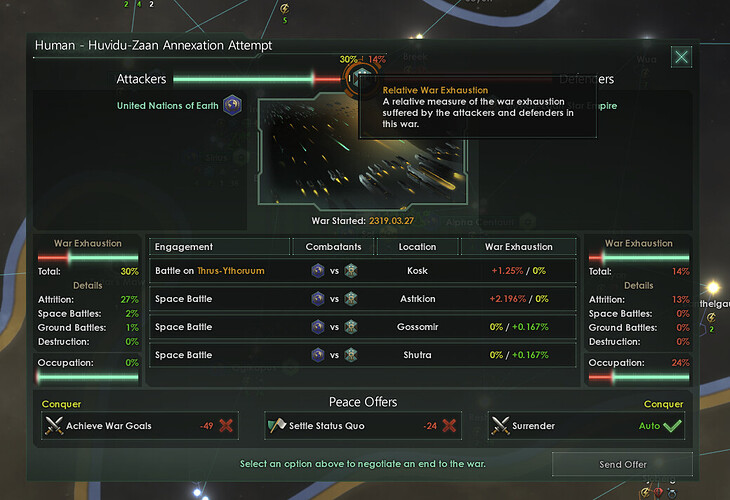 Not, it’s a weird way to do it that is not quite there (as, you know, a lot of things). There is no winning score, other than doing the war goal - in the case of conquer, occupying all claims. Achieving partial goals (individual occupations) lowers the AI’s willingness to accept, or settle as things go, which you can track on the bottom part.
What attrition means, solely, although it affects AI willingness (although that might be because of resource and income loss), is that at after a while at 100% (you get a pop up) the other side can force a status quo; in this war goal, you swap whatever systems with claims) each side occupies - it’s easy to forget other systems don’t swap. Whether the trade is good or not is up to you.
If you’re not at 100%, you can keep going to smash the fleets or create more claims or whatever, though the AI will quickly concede when the “Achieve war goals” score gets to zero.

I haven’t played since December 2018! I had 189 hours in it, and yet I never finished a game. Interestingly, I rarely fought wars. If anything my games were too peaceful – but that sort of suits me, as I’m a builder at heart.

I assume there’s a tutorial that explores the new economy and mechanics? If so, I think I’ll give it a go.

Does the 30% mean that I’m winning (and he has 14% and he’s losing)? This appears to show that I am more exhausted than he is.

That confused me for a while because I’m used to EU4 and warscore where higher number is better. The number in Stellaris is war exhaustion, where you want the enemy to be higher than yours as it represents how tired the population is of the fighting.

“Attrition” builds up over time for each side as the war goes on. It is heavily influenced by Ethics, Civics, Traditions, as well as certain technologies. In general, warlike civs tend to have a big advantage in this department, allowing them to wage war longer. If one side is exhausted, status quo can be enforced like @Perky_Goth described and I believe you can see what it will entail for this war if you hover over Settle Status Quo.

Hover over Achieve War Goals (-49) to see what you might be missing to get the AI to surrender before your side is exhausted. Otherwise, make sure you have your claimed systems occupied and I would expect that you’ll keep them in a status quo resolution to the war.

I assume there’s a tutorial that explores the new economy and mechanics? If so, I think I’ll give it a go

You know, I can’t say for sure as I haven’t looked at the tutorial since coming back to the game. I just started up a new game and picked it up as I went.

I can’t remember what changes happened when, but the game no longer has tiles you assign population to work on. Instead, jobs are created through building different types of districts (mining, agriculture, city, etc) as well as buildings you construct on the planet.

I assume there’s a tutorial that explores the new economy and mechanics?

That’s a dangerous assumption to make about a heavily updated Paradox game haha.

I guess the problem is that I’m a ‘nice guy’ and my opponent “likes it nasty”? He is an authoritarian xenophobic militarist and he shrugs off any losses. In the second pic (Battle on Huviduzaa), below, it shows how much more war exhaustion I received despite winning the battle and conquering the planet. Do I have to bombard his planets or something even nastier? 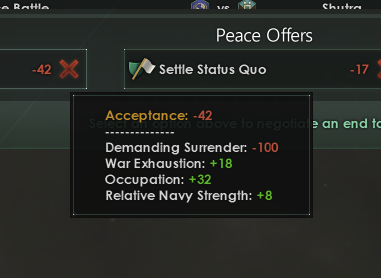 I’d fight them where you can limit your casualties. If you have air space superiority, I would keep hunting down his fleets and blowing up his stations. When invading planets, I would recommend orbital bombarding his forces until you can take them without suffering losses. “Nice guys” tend to get some good diplomatic benefits but your populace doesn’t tend to be as willing to accept casualties (generally speaking).

if you’re fighting for claimed systems high war exhaustion isn’t catastrophic. Think of it as a timer for the war to end, where you want to make sure to grab what objectives you can before the timer is up. Even if he drives your war exhaustion to 100%, it’ll be a status quo settlement to the war and that means you keep any systems that you 1) have claims on and 2) have occupied. Note he’ll be able to keep territory of yours based on the same rules.

Here’s what the wiki has on war exhaustion which can be a helpful reference:

War Exhaustion goes from 0% to 100%, and measures the total weariness and attrition suffered by all empires on one side in a war. War exhaustion goes up from suffering losses during space and ground warfare, destruction of planets (either from Colossus weapons or

Armageddon Bombardment), and a passive accumulation over time called Attrition. When a side’s war exhaustion hits 100% they can be forced into a status quo peace after 24 months. The speed at which war exhaustion accumulates is influenced by factors such as ethics, traditions, technology and the amount of claims being pressed - an empire that is fighting to hold onto a handful of border systems will tire faster in a costly conflict than one whose very independence is being threatened. War exhaustion also means that an empire that is losing a war can still fight to minimize their territorial losses by inflicting high war exhaustion on the enemy.

War exhaust gain can be reduced by the following:

Setting your Diplomatic Stance (via the Policies screen) to Belligerent before the war can reduce your exhaustion gain by 10%. I believe Supremacist stance is locked behind the Supremacy tradition tree. Finish that and you’ll be able to adopt that which is a 20% reduction.

I was ‘losing’ this war, but then he made peace with another nation and moved his big fleets towards our frontiers. I caught 2 of his big fleets individually (with my entire navy) and pummeled them. During pummeling #2, he suddenly declared peace and I got all the systems I had claims on. I was somewhat shocked, but glad.

he suddenly declared peace and I got all the systems I had claims on. I was somewhat shocked, but glad.

It think the right phrasing is “surrendered” rather than “declared peace”–you (ed: and the AI) always have the option to end a war with the “I lose” option where the opponent gets all their war goals. But yes, the UI does make it feel like all of a sudden they just declared peace.

I was ‘losing’ this war, but then he made peace with another nation and moved his big fleets towards our frontiers. I caught 2 of his big fleets individually (with my entire navy) and pummeled them. During pummeling #2, he suddenly declared peace and I got all the systems I had claims on. I was somewhat shocked, but glad.

Congrats! After the drubbing you gave him, sounds like he made the right choice and surrendered the systems you had claims on. :)

Or maybe he realized how awesome I am! :D

Do you guys play with fallen empires turned on? Apparently I picked 2 of them during game setup and suddenly things in the universe have gone crazy & I’m not sure what side to take or how to proceed.

Yeah, I typically leave them in. Are they waking up and causing trouble, it sounds like? If so, that’s one of the possible mid-game crises for the galaxy to deal with. I don’t think it’s super common, like 1 in 5 games kind of thing. I haven’t seen it since I picked the game back up this last expansion!

Been away from this for too long, need to get back to it, though I gather there’s going to be something of a learning curve. I think my last few games were on, like, 2.2 or something.

I started my first game in more than 3 years, and the tutorial is indeed still available. I’m glad, because I’d forgotten everything, and the new economy does require some explanation. So far the tutorial is very helpful.