Thanks for those suggestions. I’m interested in both flavor and mechanics, so maybe I’ll sample some DLC from both categories. And a plant species sounds fun. I’ve watched a bit of Quill18’s “Holy Romaine Empire” and found it quite funny. He’s got quite the salad going.

My current game is still lots of fun. I got the achievement for having an alien rule my empire. A bird immigrant somehow rose to prominence and won my election, lol. Also, a neighboring robotic race invited me into a Federation for a while, but they got annoyed with me for refusing to declare war on a neighbor. They also didn’t like that I supported inviting a third race to join the Federation. Eventually they left the Federation in a huff. It all made me laugh!

I’ve been playing on Fastest for a while, and I’m now up to 2340 or so. I wonder if I’m pausing too much, because other folks seem to finish games quicker than I am. Here’s a look from a few years ago, when I was still in the Federation. I’m the United Nations of Earth, at bottom. 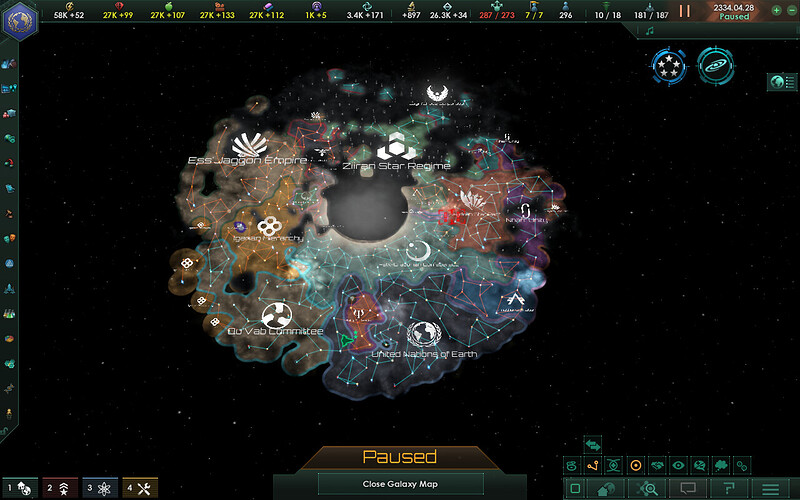 Has anyone tried the beta? I’m interested in the unification changes but won’t have time until Sunday.

TIL: anomaly research difficulty has nothing to do with chance of success, only duration of the project?

The last time I played, anomalies didn’t have a failure chance. You could either research them or not. Also your science officer level vs the anomaly level determined research speed. Did this change?

It changed, but it changed to the system you’re describing, DeepT. Anomalies used to have a failure chance based on difficulty but they changed it to taking increased time for your science ship. A much better system, IMO.

I play Stellaris like I played Distant Worlds - pausing so often you’d almost think it was a TBS. The idea is you play the game the way you most like playing it.

The idea is you play the game the way you most like playing it.

Very much this! What game speed is “right” depends on personal preference, individual familiarity and expertise with the game, current state of the board, etc.

I started playing as xenophobic birds. Seems like an interesting little sandbox so far.

Доступно на русском в ВК/Read in Russian on VK Hello and welcome back to another update on the Stellaris AI. This is Guido again. Today I’m here with my fellow human Offe who also enjoys doing organic things. Like generating energy through...

Sounds like some nice improvements, and some nice insights into how things work. I laughed at this part:

In 3.2 AI would look at the number of free jobs on a planet when deciding if it needs to build new jobs. So if there were for example 3 free jobs then the AI would clap its hands together and call it a job well done and move on. At the same time the planet could have huge numbers of unemployed pops rioting on the streets.

Overall, this confirms my impression that the Stellaris AI problems aren’t especially intractable, but just didn’t receive enough attention in the past.

Guido and I have previously worked on other projects together and he has taught me a lot about game development, but most importantly I learned some tips on how to improve my diplomatic interaction protocols. Where I would often use phrases like “it’s an absolute disaster”, he would instead prefer “This is pretty good, but it can be even better!”. This may prove to be important later on.

Now when I first saw Guido’s new economical plans I immediately thought wow this is pretty good, but it can be even better !

Overall, this confirms my impression that the Stellaris AI problems aren’t especially intractable, but just didn’t receive enough attention in the past.

Doesn’t help when a year or two of AI refinements and bugfixes gets blasted out the airlock when they overhaul entire game systems, haha. The Custodian Team is the best idea ever for PDS’s business model. They have really been improving the game in significant ways. I hope Paradox higherups see this and start structuring all their teams this way.

EDIT: Reading that dev diary and seeing section after section on AI work…

Ugh, I feel like I’m going to be picking up a new flavor DLC and spinning this one up again. Thanks, dorks.

Come on in, the water’s fine!

Is espionage asset stuff something relatively new? Might be I never dove into that before, but seemed more involved than I remember espionage being. (Edit: Looking at wiki I’m guessing it was there in Federations with the addition of Envoys and I just didn’t look at it or remember it. Or maybe the updated Espionage mechanics in Nemesis. :))

My space sardines had to smack down some flying crystals last night. Going to nickname the admiral “The Jeweler”. Unfortunately one of my neighbors is a fallen empire, and I pissed them off by colonizing one of their sacred sites. Nice 25 Gaia too. It was a shame to let it go.

That’s how they get ya…

Yep, nice little honeypot waiting for someone to come along.

Stellaris is now in my collection. And I hope that it is not the “bone dry sci-fi” experience had by one wise wag. Y’all are a bunch of dirty enablers, and I love ya’ fer’ it.

Welcome to the party, @orald !

I might try my next game with the beta. If I do, I’ll report back. I’m absolutely addicted to this game, but I do think a unity rework makes sense.

There are two fallen empires, one off to the northwest of me, and one to the southwest. The empire to my south and I have left a buffer of about a dozen systems near their borders, because I guess neither one of us wants to be the first stop on their tour.

There are two fallen empires, one off to the northwest of me, and one to the southwest. The empire to my south and I have left a buffer of about a dozen systems near their borders, because I guess neither one of us wants to be the first stop on their tour.

Encroaching too close to a certain kind of Fallen Empire can prompt them to notice you in ways you don’t want.

Yep, I’m fine with keeping a little distance. The way it is situated you would be the freeway for the War in Heaven.

So, an excavation project dug up the head of some guy important to that Fallen Empire I pissed off earlier over the holy world, and they’ve decided I’m the chosen one and gave me the world plus I can call a fleet of theirs to my aid if I activate the relic. So I guess worked out okay in the end.