Steve Ditko, the co-creator of Spiderman and Reclusive Comic artist, Dead at 90

He also created Doctor Strange with Stan Lee during his years at Marvel.

RIP! I loved Jonathan Ross’ documentary on Ditko from a decade back:

Vulture did a terrific profile on him in 2016, too: The Creator of Doctor Strange Will Not See You Now

Marvel Comics legend Steve Ditko wants his work to stand for itself. If only it were that easy.

I confess I didn’t realize he was still alive!

These guys created the modern American mythology that’s reaping billions of dollars, and they hardly get a whiff of it.

RIP. His surreal dreamscapes for Dr. Strange influenced the psychedelic era in the 60s, and fantasy art forever. (How many nether realms and dark dimensions owe their looks to Ditko?)

And he helped create a whole new paradigm for how superheros could look and act on the page: his lean, acrobatic, impossibly bendable Spider-man was the polar opposite of the muscle-bound weightlifters that Kirby and others had made the norm for superheroes.

Weird. I didn’t know he was still actively publishing stuff as an indie mail-order deal. I’m fascinated by the idea that the guy that co-created Spider-Man slipped into an insane Randian black hole. I kind of want to read his stuff just to see what a Jack Chick comic for Objectivism is like.

Significantly better drawn, I should think.

I don’t know about that. Did you see the example in the article? 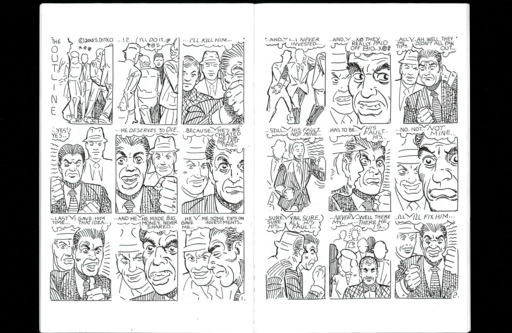 He really was one of the most mysterious major creators of pop culture. The idea of Spider-man came from Stan Lee, but almost everything we love about the character was all Ditko, and his run up to Spider-man 39 is still my favorite run of comics by anyone, ever. It was revolutionary. In fairness, so was the Kirby/Lee Fantastic Four run and most everything else created by Stan Lee and his collaborators in the Silver Age.

I knew the Watchmen characters were based on Carlton Comics characters, but I didn’t know that Ditko had created the one that Rorschach was based on (really, two of his characters, the Question and Mr. A). He really seemed to evolve into an almost Crumb-like character by the 70s.

When he came back to Marvel in a freelance role, his art seemed really dated and poor compared to what was the norm then, but maybe he just was mailing it in half-assed because he wanted to work on his personal stuff. I just remember some Machine Man, Micronauts and ROM stuff that was pretty awful and essentially ruined the promise of those series.

But his Dr. Strange and Spider-man will live forever.