Atlanta was the most horrific recent example of abuse and violence focused on the Asian American and Pacific Islander communities in this country. A clearly racist attack, this event follows an intolerable spike in anti-Asian bigotry and hate incidents since the start of the pandemic, and it builds on a long history of racism and violence against Asian Americans and Pacific Islanders in this country. There are several things that we as a community can do to stand in solidarity with our AAPI sisters and brothers.

For those who want to give to GA specifically, I highly recommend Asian Americans Advancing Justice - Atlanta.

And you can speak out and stand up when you see this shit happening. 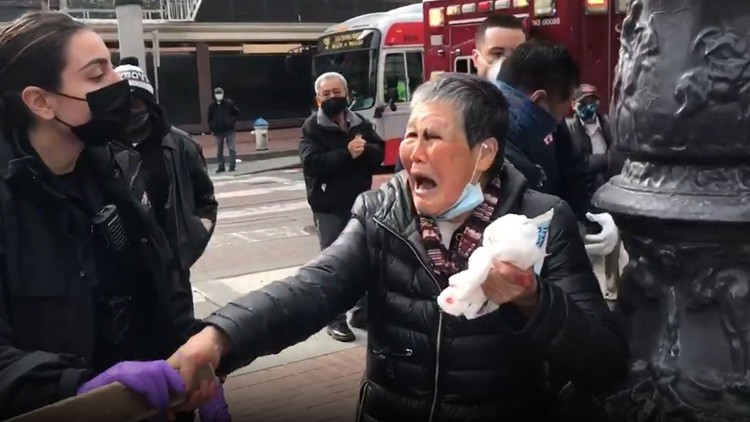 Asian Grandmother Who Smacked Her Attacker With A Board Donates Nearly $1...

The money will be donated to help defuse racism against the Asian American community. Xiao Zhen Xie's grandson wrote, "She insists on making this decision saying this issue is bigger than Her."

Wow. Shows that there are truly good people out there.

Sadly, there is a long but often forgotten history of white American discrimination and worse directed at Asian Americans, not to mention hostility towards people from all parts of Asia who aren’t even in the USA.

The anti-Chinese rhetoric of the late 19th century, which arose after the immigration of a relatively large number (for the USA) people from China mostly to work on things like railroads in the American west, resulted in a host of evils, ranging from personal attacks to federal anti-immigration legislation (like the series of Asian Exclusion Acts that started in 1882). You can read some of the California laws from the era and they’re pretty explicitly and openly racist, like this so-called “Anti-Coolie” law from 1862.

Ironically, the Chinese immigrants were here because American companies desperately wanted them here, as they could not otherwise round up enough workers to do the dirty, dangerous jobs necessary to push the railroads across the continent and to support the mining and agricultural industries growing up in California. And not all Americans were like that. There was a far amount of pushback against the anti-Chinese racism of the period, particularly in California where a lot of white people had moved west to get away from crap like that. But overall, the nation was profoundly racist in dealing with the Chinese in that era.

like the series of Asian Exclusion Acts that started in 1882

Fun trivia, the Chinese were the target of the first federal law restricting immigration. Woo! We’re #1! Something something Disapproving Asian Dad meme.

A lot of the conversations around Black allyship and the model minority this year have led to me re-evaluating my own experiences of racism. Especially as a mixed race person, I’ve always had a complicated relationship with the validity of my own experiences, and have struggled in the past with the degree to which I should even be considered a POC.

I’ve come to understand that this is itself an expression of my own internalizing of the model minority myth and of deliberate fracturing of minority identity, which ultimately serves white supremacy.

I guess that my point is that if there is anybody reading this who feels the same way, like maybe their experiences of racism “aren’t bad enough” or their complaints aren’t valid because other people have it worse, or simply because they never hear other Asian people express similar experiences, if anybody feels that way: your experiences are real, the hate and discrimination you have felt is real, and you should feel comfortable expressing it. If you want to talk to somebody about it and don’t have anybody in your life that you feel comfortable sharing it with, feel free to reach out to me via PM.

I’ve come to understand that this is itself an expression of my own internalizing of the model minority myth and of deliberate fracturing of minority identity , which ultimately serves white supremacy.

I really appreciate your contributions, here and a few other topics actually. I didn’t respond directly to this one because I kind of thought it would be seen poorly as some sort of weird attempt to tie it back to black people again… but there is a tie as your article clearly states. It’s not a minor one. It’s on that divide and conquer theme and it’s just terrible.

The other things is, I work with people who have come from many parts of the world. There is nothing positive about seeing them afraid in ways they did not express before these accelerating attacks on Asian Americans. It really is heartbreaking to hear about some shocking confrontations they’re encounter going to the store or walking in the parking lot which, fortunately, has not turned violent for the ones I spoke to. No one wants to spread misery though.

A local club here, The Trophy Club, got themselves into some trouble by advertising China Virus Rules, but because that wasn’t enough for them, when a local man Japanese American man tried to speak to the owner, well the man just revealed what a racist and awful person he was. And a Korean American also responded that he dealt with racism around here too but not usually something so… open.

I hope the woman who was attacked gets all the help she needs, and maybe part of what she needs is to give that money away. Good on her for wanting to do that.

Sounds like the US hasn’t had several attacks this targeted towards Asian-Americans since the 1992 LA Riots.

We had a large gathering today, work-related, to talk about this topic. There is some data:

There were 3,800 anti-Asian racist incidents, mostly against women, in past year

“There is an intersectional dynamic going on that others may perceive both Asians and women and Asian women as easier targets,” one professor said.

That’s the news article but the groups info is found here:

It’s important to note that the there is a difference between hate incidents and hate crimes, and that almost 3800 number is focused on incidents. All of this alarming, but the fact women are getting 2 times the incidents compared to men might explain why the videos that keep going viral are showing women.

The synagogue that I affiliate with (but rarely attend) sent out an email discussing how our shul and the Jewish community in general is getting involved. Some of it includes:

In response to this tragedy and the belated awareness that it has sparked, American Jewish organizations have issued statements of support and calls to action. I want to share some of these with you.

The Jewish Theological Seminary, the foremost institution training clergy in the Conservative Jewish movement, with which we are affiliated, posted this powerful denunciation: JTS Denounces Anti-Asian Violence
Reconstructing Judaism, the voice of the movement in which Rabbi Amy was ordained, issued this statement, which concludes with a list of necessary action steps: Statement Condemning Atlanta Attack | Reconstructing Judaism
Among the many other important statements was one from the Anti-Defamation League, which teamed up with The Committee of 100, a parallel organization of Chinese Americans. Their joint communiqué includes a link to a list of governmental steps to combat hate crimes against the AAPI community: Joint Statement from ADL and Committee of 100 on the Rise of Anti-Asian Xenophobia and Hate | Anti-Defamation League

We’ve also invited Rabbi Angela Buchdahl of Central Synagogue in New York City (the first and perhaps only Rabbi in the US of Asian heritage I think).