Sunless Sea - Kickstarted! From the creators of Fallen London

Right. I forgot someone went back to play a 4-year-old game and then kept bumping this thread. :D

There’s a mod that adds a warehouse. Just FYI.

I just tried this for the first time and I’m not sure I ‘get it’ or if I do get it than it’s not for me.

Sometimes I get a reason to go explore to the NE or something and sometimes I’m just exploring to try and uncover something.

Sometimes when I encounter a port it may have some options that I can’t do because I don’t possess something. Later on is there any way to see what options were available in ports I visited and what was needed, or am I expected to remember / take notes.

Most of the time the options to pick are just a matter of ‘what sounds like it might be cool’ right? Sometimes there is some info like a success chance - but for many things I don’t really know if something will be beneficial or harmful?

Is the main point of the game just to uncover stories I think are cool (and reach my end goal)?

If the above things are true, than the game isn’t for me. Or am I missing / not understanding something?

Sort of. It’s also a bit of a survival horror game combined with an exploration game. You see how far you can push from the starting port and what you can uncover. How much you can build up and what you’re willing to risk to explore further out into the sea.

I think it’s probably not for you. I wasn’t for me, either - not enough of a “game” underneath all that great atmosphere and world building.

Yep, not for me neither. If you have a lot of games on your plate, you might want to play something more enjoyable. Developers don’t really respect your time in that game which can be really frustrating.

Yep, not for me neither. If you have a lot of games on your plate, you might want to play something more enjoyable. Developers don’t really respect your time in that game which can be really frustrating.

The game is about exploring and discovering the world (and also upgrading your boat or buying new ones, etc.). The exploration is the core of the game, really. And as such, in a big game world, that exploration does take time because that is the nature of that gameplay loop.

Some people do not like that. Some people do. The good thing is: you’ll know pretty quickly if it isn’t for you, which it sounds like it might be the case! It isn’t, however, disrespecting a gamer’s time. That’s just a too-easy trope.

(For the record, my biggest complaint with Sunless Seas is that it constricts your exploration too much – especially early on – with the rate of fuel use and that fuel expense. Games that want me to explore their worlds but make it difficult for me to do so are pet peeve of mine. Thankfully, Sunless Skies fixes that issue and gives you even larger and more interesting worlds to explore.)

I decided to play a bit more today because my brain doesn’t want to think about what to play next. Inertia caused me to fire it up this morning. There are two main reasons I will probably stop for good soon.

There doesn’t seem to be a story with characters to get to know and progress through the story with. It feels like some people were tasked with writing atmospheric snippets.

There doesn’t seem to be a way that the game tracks information to help the player decide where to revisit. For example: 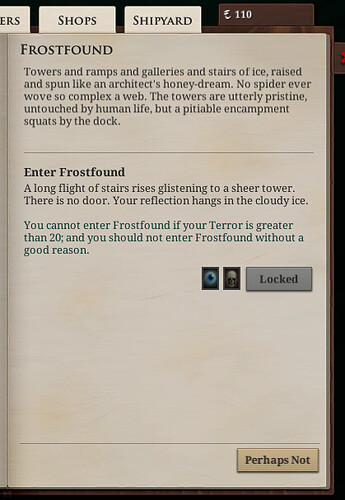 I’m not going to remember that there is a location on Frostfound that I can enter if my terror is <= 20. Just like I’m not going to remember that I need some enigma or 7 floofles for some other choice on some other location. If the journal kept track for me I think I’d be more likely to play for longer because then I might be able to plan my travels better. I could keep track manually, but I’m too lazy.

I guess the game also just feels arbitrary to me too.

I sunk quite a few hours into Sunless Sea, but ultimately Sunless Skies turned out to be far more of what I wanted from the game.

Honestly, I think it’s better in pretty much every single respect?

Honestly, I think it’s better in pretty much every single respect?

Plus Sunless Skies points you in some very focused directions very early on regarding making money and how you create sources of income for yourself so that you can explore to your heart’s content.

I also found that Sunless Skies was willing to be a lot more clear about some things: Here’s your stats and here’s what they do and what they mean. Here’s your ship and you ship stats. Here’s how you’ll make money, at least to start. Here’s your quest log. You do these quests. Your captain gains XP to level up. Your ship can be improved, sold, and improved on again and again. Go nuts.

Sunless Sea is a somewhat unfair choose your own adventure game.

Sunless Skies is an exploration game with a robust choose your own adventure layer.

I found Sunless Sea more memorable and I thought it had a more interesting vibe, but Sunless Skies is unquestionably the better game.

Yes, this. I’d love a Sunless Sea 2 with all the improvements to Sunless Skies + any additional lessons.

OK, I won’t write off Sunless Skies because Sunless Seas isn’t quite doing it for me. On another note, I just notices the Shops tab when I was docked at Fallen London. I can’t believe I played this long and missed them. That certainly makes getting supplies and selling some things for money better. Holy cow. I imagine other docks have shops too that I didn’t see.

Oh god I don’t know how you survived at all without buying supplies at port, that’s an achievement

Seas has spectacular atmosphere. There is a learning cliff.

The quest system is fixed in skies making it a much more playable game.

Is there a mod that makes Sunless Seas more forgiving, or a better game, like Sunless Skies?

I thought about lobbying Failbetter to overhaul Seas, but they chose rightfully to invest in a different kind of game instead of replowing where they have already been. Mask of the Rose is due out spring of 23.

Note: I do mention some specifics so if you don’t want to see spoilers then skip this post.

Well, I played more yesterday than I thought I would buy I’m now out. I lost my first captain, but my second has stayed with me even though I didn’t realize there were shops at the ports to buy fuel and supplies at. I was scrounging around and living off the gas from the admiral and getting supplies from killing pirates, eating at the 3 sisters, story choices, etc…

Once I noticed the shop tab it blew my mind! I think I explored around 70% of the map - made it all the way across the sea. My goal was to recover my dads bones. I made it to the Fathom King and he presented me with a large list of items I would need to give him to get his help. At that point I was just like, I don’t think so. Maybe it wouldn’t be that bad if the game kept track of what was at the ports I visited. I started to do that but got tired of it. I could use the wiki I guess.

The only ship upgrade I did was one step up with my engine. I would have done more if I could - moving quickly is definitely a boon. I bought the townhouse and had a kid.

I’ll be curious to give Sunless Skies a try at some point after I have some time between me and Seas.