It’s a good thing Sunless Skies doesn’t do any of those!

I don’t know about Skies (I guess it’s subjective anyway), but Sea is a real slog. Travel times are nuts and make me give up on the game every time despite wanting to enjoy the narrative content.

I don’t know about Skies

(I didn’t much care for Seas either. I adore Skies.)

Before we could even start your experiment I think we’d encounter a problem just setting our baseline. I don’t think there’s any such thing as The Nutcracker Suite. All three examples you give are always variant down to the particulars of any individual production and we’re immediately into the subjective realm of trying to pick out ‘the best’ Nutcracker to use as our starting point.

Given that no two performances will ever, or can ever, be identical we are already in the territory of approximating your example to a platonic ideal. Of which there are an infinite number of. Tchaikovsky’s ideal would probably be the fairest choice for us; though of course it likely has only ever existed within the confines of his head (and even then, we’d further need to narrow that down to a ‘when’).

As to what, or how much, we can change without truly altering it? At first glance, the music would seem to be the most important definition of the experience, but at the point I’ve removed the clothes from the dancers entirely and just have them twerking the hell out of the stage I doubt anyone’d care about that.

Except for the blind scotsman, of course.

Back to Sunless Skies then, and the ideal experience. We can at least establish a baseline more easily, here, since we could set up two computers with near-identical hardware and configuration sat in near-identical rooms both running the same version of the game. We’d probably have to fight over some of that, though. Screen resolutions, headphone brand, and the like. Would we both have to use WASD controls (I’m not a fan)?

Also, which version of Sunless Skies are we putting to the test? The launch version (replete with the bug that, with a bit of skill, allowed you to boost around quicker at the expense of increased fuel consumption), the current version (with that bug removed) or the Sovereign edition we’re yet to experience (presumably with its own bugs)?

So; purity is only ever an asymptote, and we can’t even define if there’s just the one. That said, as vague as it may be, there’s a Failbetter asymptote out there somewhere, one which they’re still trying to approach (hence the bugfixes, Sovereign ed., etc). I’m just not convinced any change that I make doesn’t move my experience away from that though.

Sunless Sea is about space. Sunless Skies is about time. Compressing space and speeding up time fundamentally alter the experience away from what the designers intended and, in my opinion, diminish the efficacy of the design, storytelling, and worldbuilding. Which is certainly your prerogative! But claiming it’s the exact same thing as playing a different soundtrack implies to me that you don’t understand the role of space and time in those game’s design, storytelling, and worldbuilding.

Yakety Sax to that argument.

(Also, you can’t transition from the state of ‘plain french fry’ to ‘salted french fry’ without having to add the salt. Which is what we tripped up on, semantically, at the start. Just an observation as to the vulgarities of language.)

NB: I’ve not argued in favour of the cheat engine ‘speed everything up’ approach nor really even the ‘just the player moves faster’ approach. My observation is merely that Sunless Skies, at points, bored me. In part because I moved so slow. In part because there was no risk in what I was doing. In part because the world economy is largely (entirely?) static and unchanging. In part because the combat didn’t feel skilful and the rewards for doing so subject to bouts of miserly RNG. The aesthetic of terror, exploration and the unknown all too often gave way to the mundanity of mere logistical grind.

I’ll reiterate that I didn’t ‘mod’ Sunless Skies whilst playing. At all. Perhaps listening to something else in these moments could have alleviated that feeling of boredom. But that doesn’t change the fact that I was still bored by the game as-is.

I also find interesting that the argument centres so much around the movement speed being so immutably important to the experience when it’s actually variable within the game as designed. If I rushed to get the best speed upgrade as soon as possible, would I be having a ‘less true’ experience as a result?

Also, doesn’t the fact that I even can upgrade my speed kinda suggest that it’s acknowledged within the design that it’s more fun to travel faster?

Also, doesn’t the fact that I even can upgrade my speed kinda suggest that it’s acknowledged within the design that it’s more fun to travel faster?

For me it acknowledges that once I’ve played enough of the game that I can afford faster engines to make a strategic travel difference in things, I will have opened up vast sections of map across at least 2 of 4 (or more!) game maps, and thus will need to travel faster when I need to back-track and when exploration is less a current concern. When I want to do that.

But far more than that, it acknowledges that I will be facing faster, more difficult contra-faction enemy ships and creatures as I get deeper into the game, and will need a faster ship to get away if so needed.

You’ve just suggested that the main reason to raise my fighter’s strength in a traditional RPG is to be able to chop more lumber, rather than be able to do more damage to higher level monsters who will have more HP.

It still changes the experience of travel as a consequence though, right? And doesn’t the player already have access to tools to escape from combat, namely the boost? Why not only allow for upgrading the boost, or design other methods of escape if that was the intent?

As to what, or how much, we can change without truly altering it? At first glance, the music would seem to be the most important definition of the experience, but at the point I’ve removed the clothes from the dancers entirely and just have them twerking the hell out of the stage I doubt anyone’d care about that .

You are soo full of it, but I give you massive kudos for an awesome post.

That word… asymptote. Yeah that one. It is ugly sounding. Make me believe that it is beautiful :)

Asymptote for whom the bell tolls…

Beautiful post @fox.ferro , and kudos @Anklebiter for triggering him into shitting that one out <3

A definition of the metaphor? I just wanted to call to mind certain mathematical functions (e.g. tan) where as you move along one axis, the other shoots off to infinity and you can never actually ‘reach’ certain values.

That is to say, the effort required (on behalf of Failbetter) to reach their perfect ideal of Sunless Skies would be infinite* and subject to significant diminishing returns. However, we can still observe we are closer to it with the release of the Sovereign ed. than the launch version. Presumably.

This forum needs a <3 button, because that post deserves some love.

Math nerds would prefer you to say that “the limit approaches infinity”. In the terms of your analogy, it better encapsulates your idea of diminishing returns. ;)

If we’re going to be pedantic that’s not always true, either. X/0 (and the asymptote values of tan) do not have ‘a’ limit as from one direction they tend towards negative infinity, and in the other positive infinity. Hence they are undefined.

But the fault was still mine in not narrowing the scope of the original statement. Let’s call it a draw? ;)

If we’re going to be pedantic that’s not always true, either. X/0 (and the asymptote values of tan) do not have ‘a’ limit as from one direction they tend towards negative infinity, and in the other positive infinity. Hence they are undefined.

Wrong. The limit approaches + infinity if you approach from one side, - infinity from the other. It’s only undefined at the point of the asymptote; the limits are very well defined.

So it’s not a draw, just pure math. Though it benefits no one to keep discussing this outside of the “Math Nerds” category. ;)

And doesn’t the player already have access to tools to escape from combat, namely the boost? Why not only allow for upgrading the boost, or design other methods of escape if that was the intent?

Boost will not get you out of encounters the deeper you go. And magnifying boost on the same old crappy starter engines (when you can upgrade everything from weaponry to crew quarters to your hold to the hull of your ship) would be a very unsatisfying gameplay mechanic.

And to think that only yesterday I didn’t understand why an artist would learn calculus.

Math is perhaps the purest form of beauty. ;) 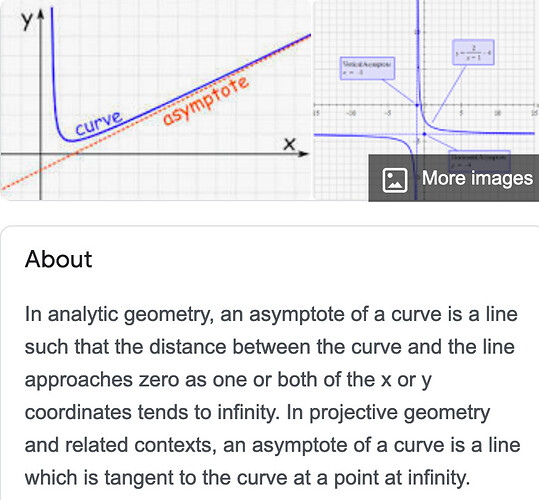 Very platonic when it comes to art, yes? We will always see the shadow on the cave wall, and never the true thing?

The main problem I have with using math to describe art is that the human brain is like a billion times more advanced than our latest math models.

In this area I trust “feelings” and personal instinct more. Not to say that math isn’t the driver for this, but just that we haven’t figured it out yet.

Nutcracker is about the music BTW.

The Nutcracker symphony would be a great soundtrack for a session with Sunless Skies.

Nutcracker is about the music BTW.

Not the naked twerking dancers?