Super Mega Baseball: Extra Innings is coming to Xbox One and PC on August 21st. Somehow, we missed talking about this game when it launched for PS4 and PS3, despite it being lauded as one of the best baseball games to come out in a long time. 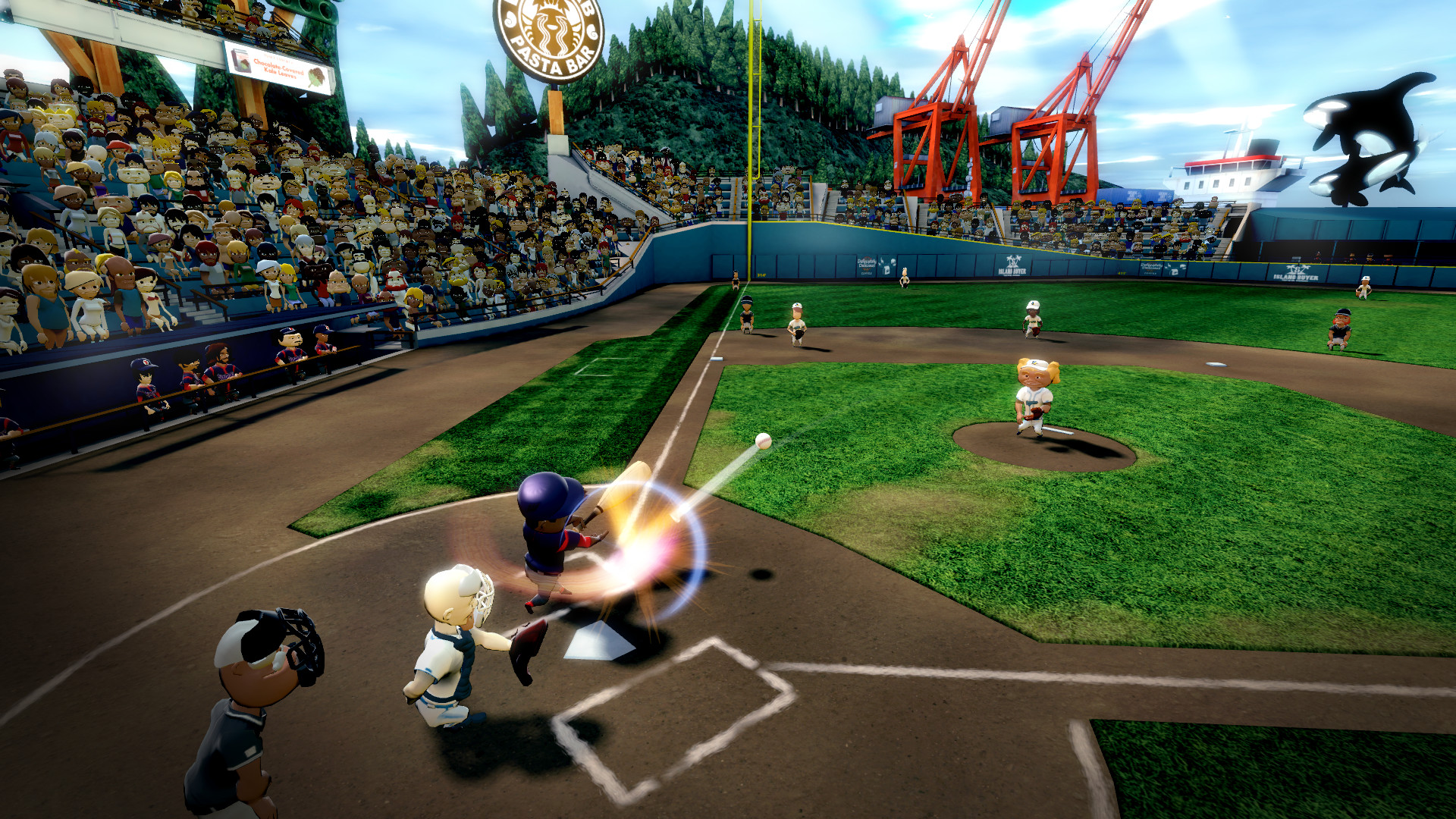 Yes, it has big heads and cartoony kids show-style effects. Don’t be fooled. There’s a hardcore sim, and some satisfying arcade gameplay underneath that goofy look.

Super Mega Baseball boasts an innovative difficulty control scheme called the Ego system. The Ego system offers a fine-grained control of difficulty on a per-user basis, which has been widely praised for leveling the playing field in cooperative and competitive modes. This system will push seasoned gamers to their limits while simultaneously providing a gentle introduction for beginners.

Important note on the developer’s blog:

Those of you that own the original version on PlayStation are probably wondering what that means for you; be assured the new content will be headed your way as well, via updates and/or (free) DLC. We’ll provide more details on exactly how that’ll work once we’re a little further along.

(Extra Innings is kind of like the enhanced version)

How friendly is this game to someone who doesn’t know anything about baseball other than the fact that it has bats and something called “innings” and players spit a lot?

Wonder if the port to PC will do it justice or is this one you really need to play on a console?

Nope. They’ve been rather silent on the extra features. That said, the original was fun as it was.

edit - I noticed that Steam doesn’t have the price listed. I’ve seen it posted elsewhere that it’s supposed to be $19.99

Yep, and got a PS3, guess I can just wait and see if the port turns out well, I’d just as soon play it no the PC.

Btw, thanks for bringing this one up in a thread! Always on the look out for a good baseball game!

And this game is finally out today. I’ll probably pick it up. Anyone else doing the same?

I love the helpful video explaining the rules for non-baseball countries.

We've been mightily surprised by the number of folks (in Europe and elsewhere where baseball isn't so popular) that have said "I don't really understand baseball but I'm gonna give the game a try!". We think that's pretty awesome, and want to help...

Yeah, I liked it too, considering I know pretty much nothing about baseball. Let’s hope it’s enough to enjoy the game and the game it’s based on!

Would love to try this but having too much as a SP in The Show. Might go with it for a less serious baseball fling to fill that niche though.

Arcade game through-and-through, it seems. It does have seasons and lots of statistics, but the focus is on playing matches and all.

There’s a really decent game of baseball in here. Looking at the art style I was expecting it to be a press-button-to-win type thing, but there’s a few tweaks and systems added in that make this surprisingly basebally game of wagglesticks.

Firstly, for pitching, you pick the type of pitch you want, pick where you want to throw it and then try to get a waggly cursor over the crosshairs by the time the Pitcher releases the ball. The closer you are the more points you get for that pitch. The more points you get, the more filthy the pitch is. You can goad batters to swing at pitches outside and they will also watch pitches go if they’re ahead in the count.

Your Pitcher is rated for velocity, accuracy and “junk” and the ratings seem to have a proper effect. My starting pitcher throws straight heat and does well getting batters to whiff on fastballs, then ground out on her change up. Meanwhile, my closer is slow, but accurate and has filthy stuff, so I throw a lot of curves and sliders that tease the batter to swing, then disappear into the basement.

These ratings are affected by fatigue and “mojo.” Mojo is a form of confidence, where events in a game will change a player’s capabilities. If the batters get a lucky long bomb, then your mojo may drop, which can turn into a self-reinforcing cycle, forcing you to send to the bullpen.

Pressure is also included to modify your pitcher’s abilities… making it harder to pitch successfully with the bases loaded than with two out and no one on.

Mojo also works for batters, which has a couple type of timing games going on. You can play for contact, which is a simple button press based on timing, or you can go for power, which involves you holding the button instead of tapping, then releasing to hit. You can also bunt. Batters are rated for power, contact and speed on the basepaths.

The game also has an “ego” system, where your ego points go up as you gain in-game experience and good results. With low ego, the game will make sure your bat is swinging on the right plane, making batting all about timing, and it’ll move fielders under the ball for you. As your ego goes up, so the game does less and less for you. Theoretically this means that players of different skill can play each other, although multi is purely local right now.

I was expecting pure arcade basthathon here, but there’s at least a little more to this.

I just played a warm-up 5-innings exhibition game followed by a season 9-innings game, both at Ego Level 15 (casual). I gotta say this game is fun! And approachable even to someone almost completely unfamiliar with baseball like myself.

Of course, there is plenty I don’t understand yet, from terminology to game rules/concepts, but I had a great time nonetheless. I look forward to playing this game a whole lot more!

Yep just played my first game and KM was a option but it seems it will be a lot easier with a gamepad.

You can play with mouse and keyboard, but I’m not sure that would be ideal. Then again, I can’t remember the last time I played an action game with the mouse and keyboard, so I’m probably a terrible judge. There would be a lot of keys/mouse clicks/mouse gestures to ascertain. Then again, there are a lot of buttons and sticks and triggers to figure out with the gamepad. Just like Hand of Fate, I may be getting too old for these types of games. Also, just like Hand of Fate, I’m certainly enjoying my time with it.

The ego system is pretty cool, they start you off at 15, but even I could “Dominate” the CPU at that level. They go out of their way to make it clear by telling you that you are Dominating and give you some extra points. I bumped it up to 19, the last Casual setting, and it was a little closer game, but I’ll be going to Medium level (Ego 20) in my next game. They also let you set Ego individually for Fielding, Batting, Picthing and maybe a couple of other things. This should be terrific for walking you through the learning curve and eventually dumping you out on a pretty sophisticated baseball sim.

Batting is pretty simple as long as the computer is guiding the reticule, as you simply need to time the pitch and determine it’s trajectory. However, they’ve also thrown in a Power mechanic where you can hold the X button and release it at a high power level. So, you need to predict the speed of the pitch to coordinate when you press the X button, so you can release at the best time versus pushing or pulling the ball. Or you can just hit the A button to make contact and try to get the ball in play. You can still get an occasional homer on the Casual level, but I’m sure they’ll take that away at higher levels.

Pitching is pretty cool once you figure out what is going on with the breaks and the crosshair movement and timing the freeze button for placement and bonus points. I’m not sure how they’ll add further complexity with pitching unless they simply make the CPU a little less forgiving for mistakes, which I make a ton of, but have only rarely been punished for so far.

Baserunning, stealing, fielding and throwing the balls are partially assisted earlier, but will ultimately allow complete control to the player. I’m not sure if I’ll ever get there, because that would be a whirlwind of commands, but I’m sure many faster fingerered and thinking players could do masterful things with it. It harkens back to my heyday with Intellivision baseball. It was literally so much simpler then.

Finally, there is a wonderful leveling system that allows hiring of staff and doling out there perks to players. The players will also slowly gain or lose skills depending on their level of play. There really is a lot of stuff going into this bobblehead/metalhead game. Yep, the game has a hard rock soundtrack, which is only appropriate from a studio called Metalhead Software.

If you have any interest in an action sports sim, this game should be checked out.

The devs put out a m&k chart.

I too am thinking of this but lack a controller. I am glad steam has refunds, because two hours will be all I need to tell me whether this old guy can handle an actiony baseball game.