I’ve heard that the current plan is that the next Smash will be a reboot - redesigned, possibly very different fighting and back to a smaller cast. Of course that’s years away and I doubt they’ve done much more than consider it at this point, especially if they’ve designed to lengthen the DLC plan.

I don’t know if that specific rumor will turn out to be true, but it sort of fits with this quote from Masahiro Sakurai.

“To me, it feels like the finish line is sliding farther away,” he said. “You may wonder, ‘How much longer can he be involved with Super Smash Bros. Ultimate ?’ But I’m also excited. Adding more characters into the game means more game worlds will be added to the series, and ultimately, that means there will be an even greater opportunity to delight the fans. At the same time, I feel that Super Smash Bros. Ultimate is representing so many characters and game worlds that it’s become an enormous game. Even if the Super Smash Bros. series continues moving forward, I doubt there will be an opportunity to bring this many characters together again, so I want to keep improving on this record as much as possible, and I will continue to work hard at developing the game. I appreciate your support.”

(from Polygon’s coverage of the direct)

Basically, “we’ll never get this many characters again, so let’s just go nuts”

And yet, despite all this, still no Waluigi. Is there any justice in this universe at all?

If I’m Nintendo, at this point I bring him in as the very last character for a complete surprise free update as part of the last update they ever do for the game. It’ll be funny and also probably give the game one final burst of marketing for all three people with a Switch that didn’t buy it yet.

This is the future liberals want.

I finally bought a Switch and picked this up for the young nephews to play 4 player. Fired it up solo the other night and was like ‘wtf is going on’, then proceeded to read some of the in-game guides and came to the conclusion ‘apparently, quite a lot’.

Then I played with my 6yo boy yestereday arvo and we had a blast. He kicked my yass a few times! He was sooooo excited wihen we unlocked Bowser.

It is my 5yo nephews favorite game. He has a few characters he loves, so I bought him an Amiibo at Christmas. Now he loves scanning it in and fighting against it, or alongside it in a team, as it levels up.

Unlocking the fighters is great fun, but there are so many and some are tough to beat at first. In the end I did a big grind to unlock them all quickly so we had lots to pick from (as well as buying all the DLC fighters). Unlocking them all will probably be the main issue with the game for some players.

One great thing about Smash is how customizable it is. For the younger kids I edit the ruleset to make the stages easier. I set Stage Selection to ‘Battlefield & Omega’ which gives you variants of the stages that are smaller and flatter, as well as turn Stage Hazards to Off.

Also random Stage Morph is cool, so the stage changes mid game. And I set FS Meter to On so they can build up smash power by playing rather than just having to hit the smash orbs. They get to use their special powers more often that way.

Join Super #SmashBrosUltimate director Masahiro Sakurai on 1/16 at 6am PT for a roughly 35 minute video livestream featuring an in-depth look at an upcoming DLC fighter, which he will unveil in the video! https://t.co/aOz0ilAiXU 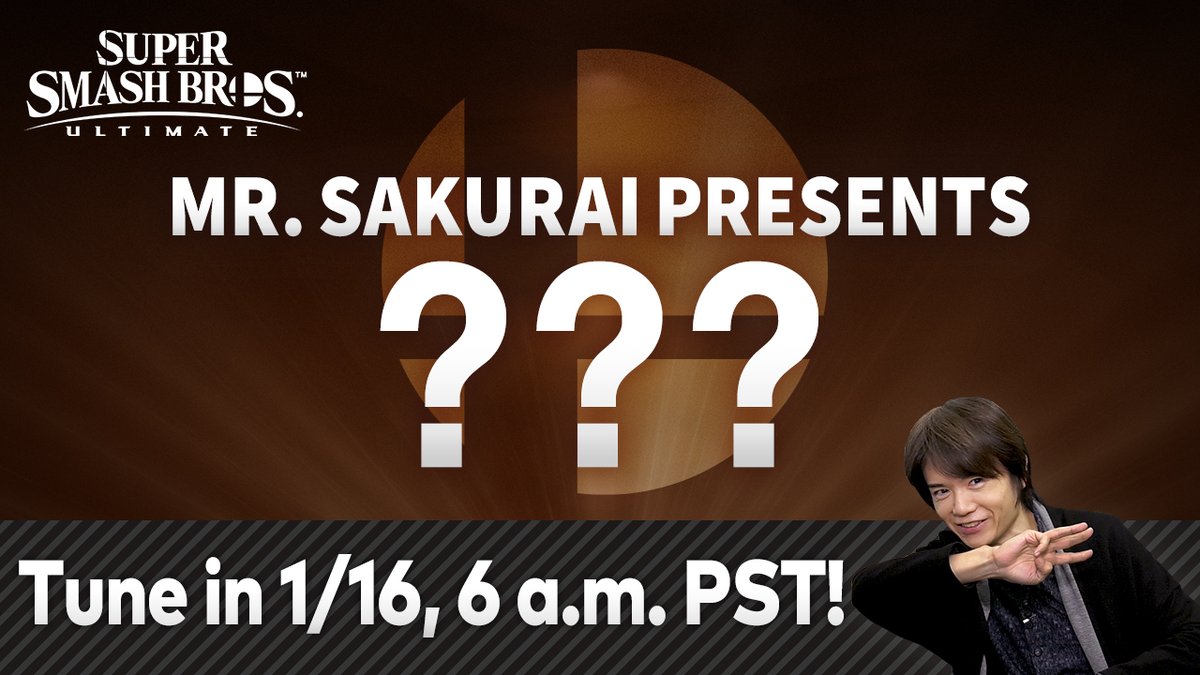 Waluigi or I riot

Oh I would love Waluigi! But I doubt it will be.

Ah, today is a hilarious day in the Super Smash-o-Sphere.
Fire Emblem Forever!

lol @ “The additional characters have already been decided…so even if I get a lot of requests on Twitter, it won’t make a difference.”

I guess i should get around to playing 3 Houses. I stalled on Birthright/Conquest.

Is it another Generic Anime Person? The game already has like 10 of them

A brawl is surely brewing! Cuphead is joining Super Smash Bros. Ultimate as a downloadable Mii Gunner Costume!! Available for purchase on 1/28, including the music track Floral Fury. Our deepest thanks to @Sora_Sakurai and Nintendo for this unbelievable opportunity! https://t.co/1VWxO7XGxc 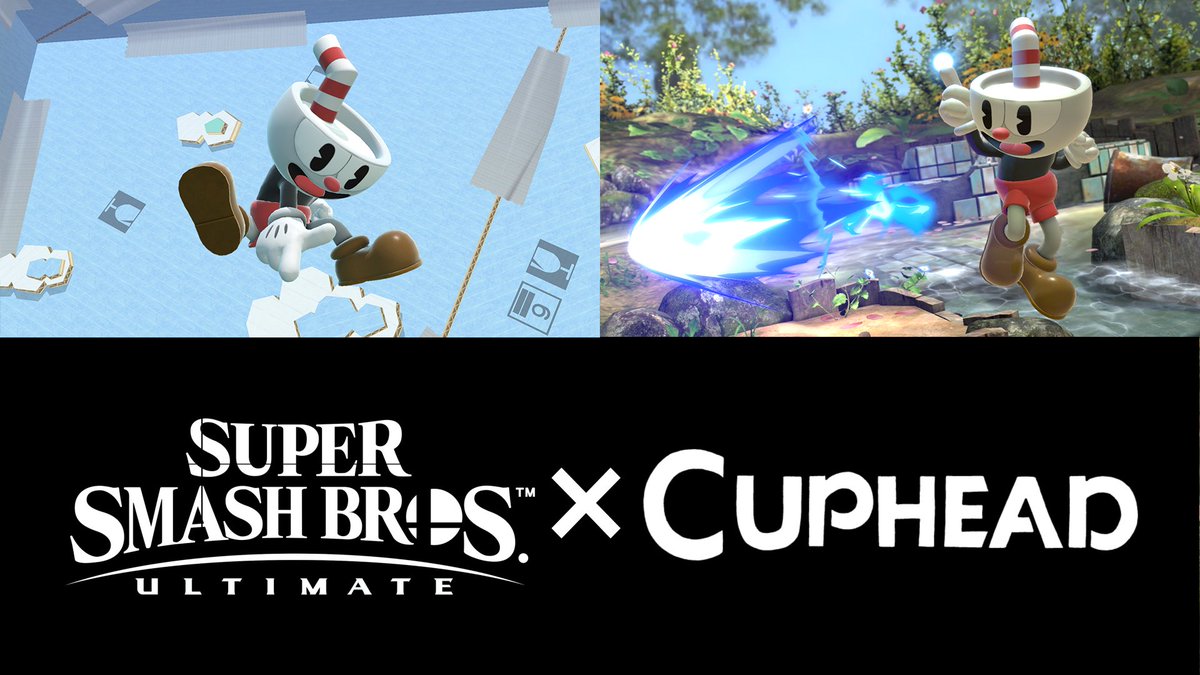 The new character is Byleth, the protagonist from the most recent Fire Emblem game.

So it is another Generic Anime Person. 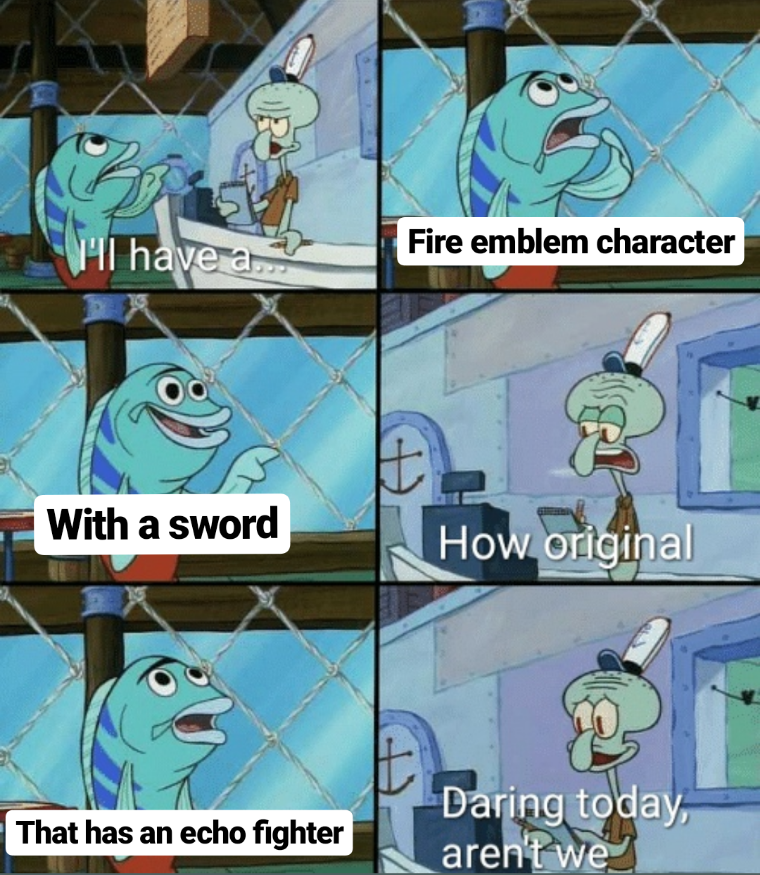 I don’t believe Byleth has an echo fighter.

I think it has both male and female Byleths.

Sounds interesting enough, a slower character that can swap between four weapons.

And six more fighters to come in pack two! :)