Sword of the Stars - Expansion Released

The race I’ve decided to play are the Tarkas, the galaxy is real space (which in this case just means it’s a randomly apportioned large blob of 101 stars).

I adore SotS, love the UI, love the 3D map (and continue to rage that no one else uses them anymore), love just about every little thing about it. Alongside AI War it’s one of my two top strategy games of all time, bar none. It’s a shame SotS 2 is such a steaming broken turd of a game, despite being gorgeous.

Personally I always preferred Hivers, because I love planning out a gate network and that whole Enders-Game-ish early game where by the time anything gets to a new system it’s 3 generations out of date. And then finally working your way up to farcasters and being able to project power in an unprecedented way because the gate network is such a powerful defensive tool.

Ditto. MOO2 is my favorite Space 4x, but honestly SOTS Ihas aged really well. I’m not sure that even MOO2 is a good. I can’t say I love the interface, but a 3D map is hard on 2D screen, and it works. There are just so many wonderful design choices, and certain elegance to the game that it reminds me of New World.

It is rare game, that is this complex, but the systems still work together for the most part… But what is so impressive is making all of the races feel distinct.

I’m playing on difficult AI and it is challenging as the Liir, who I think are one of the easier races.

This is certainly one worthy of just one more spin around the galaxy! I need to dive back in and continue my journey w/ our scaly friends.

Been out of pocket, went to visit the Ho Rain Forrest and the beaches in the vicinity, and now I’ll briefly derail the AAR w/ a couple randomly select pictures: 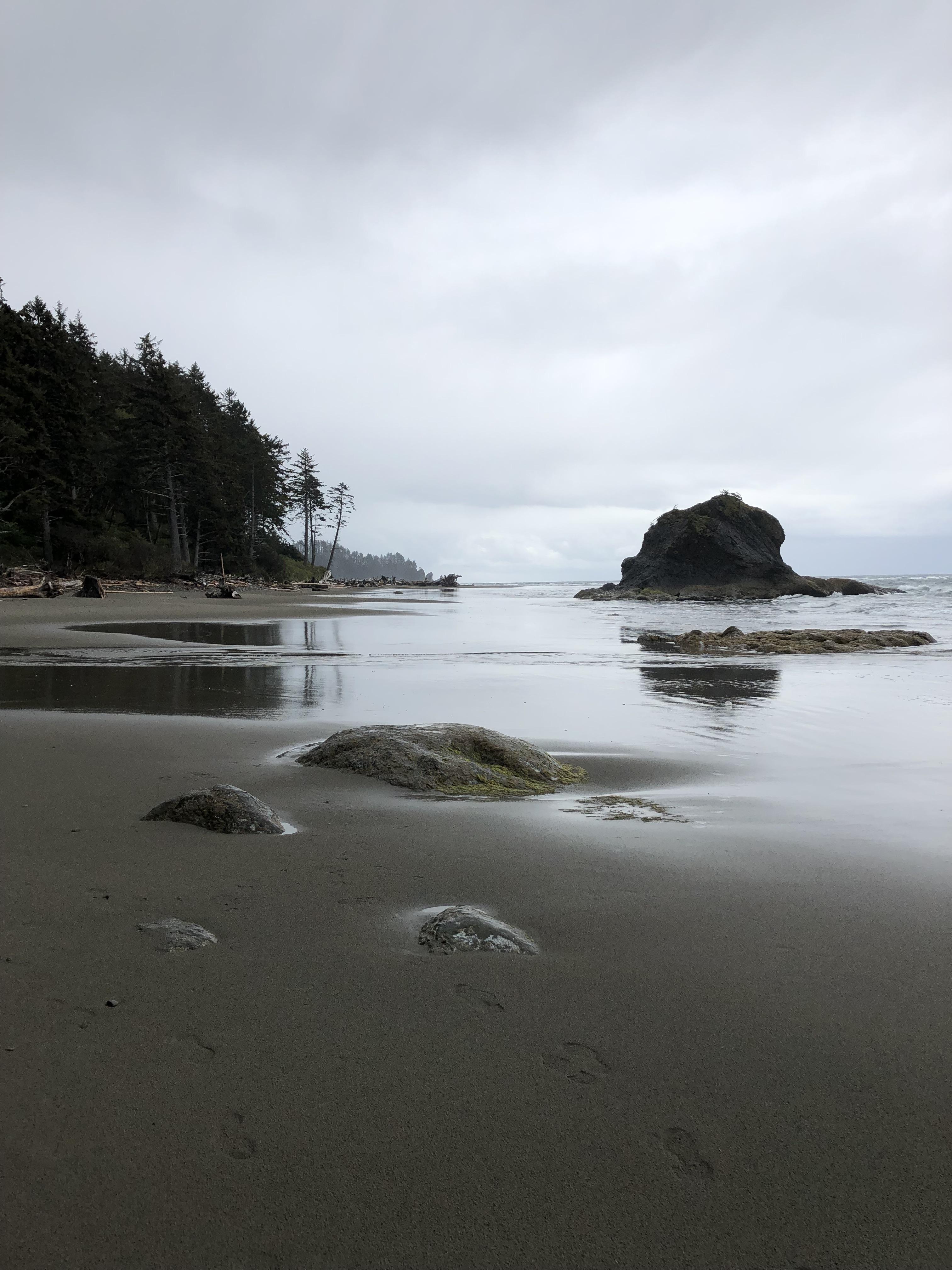 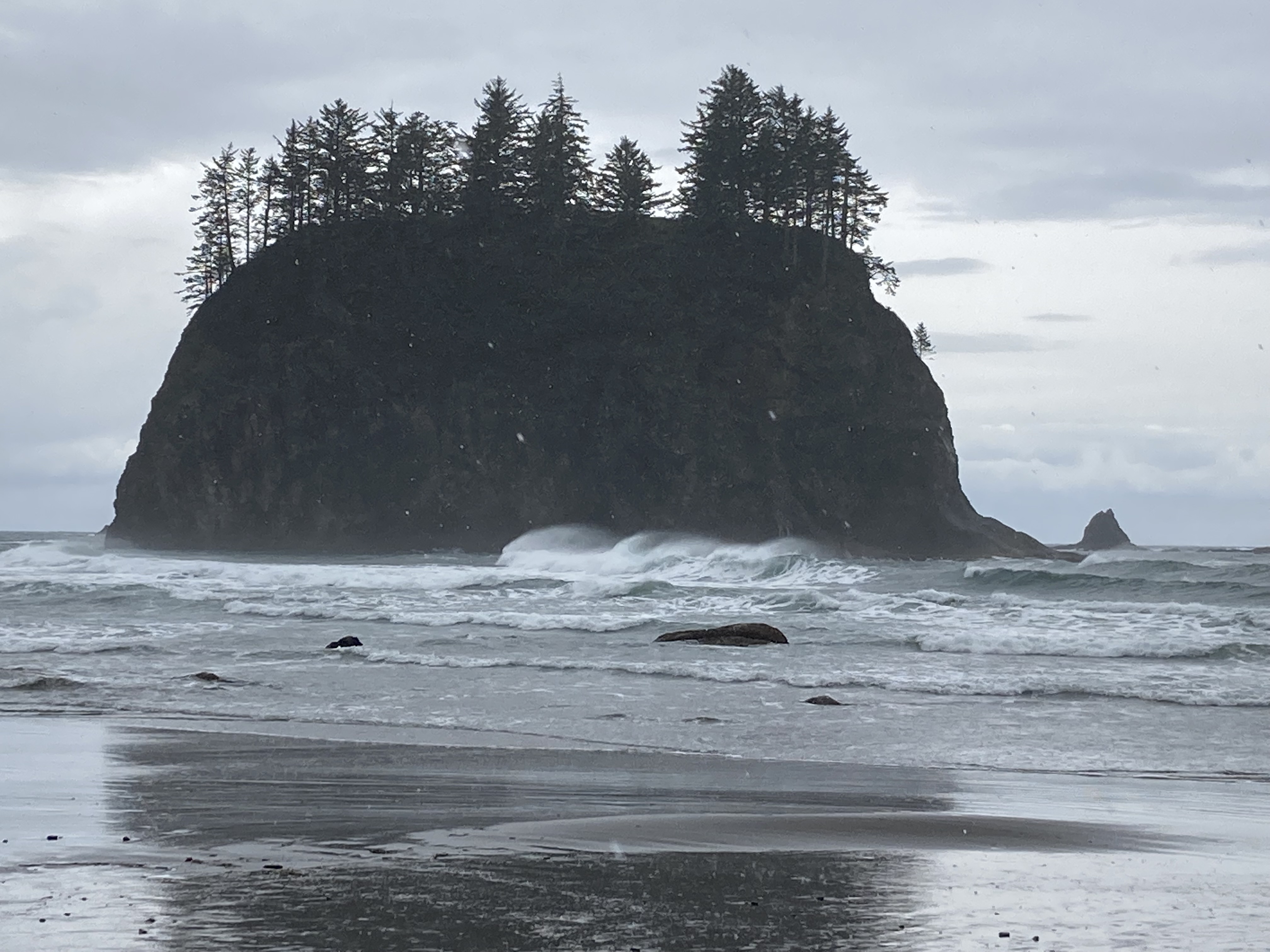 Status report update to Commander Komodo of the Tarkas Empire:

Research ironically enough is an inexact science. So at 51% you have a chance of it completing early. Conversely you also at 101% have a chance it goes over budget and over time and not completing for up to 150% where it will complete regardless. Which does a pretty good job of loosely simulating that research doesn’t always go according to plan and sometimes you get lucky with an inspired bit of research coming in early.

And as it just so happens that’s what we just lucked into with improved engine tech giving us a boost on range. The research team is next turning their attention to suspended animation so we can build colony ships that will hold more colonists than the standard default colony ship.

The tricky bit about ship design is as you improve it that tech only gets bolted on to newly built ships. So all those tankers and scouts initially sent are all going to take like 6-10 years to get where they’re going. Yet if we built a scout now it would be able to travel further and faster than the ones already in flight. Plus all ships are stuck at whatever tech design used when they initially left the ship yard, there’s no refitting them.

Next turn we completed the suspended animation and proceeded to build a colony ship to keep ready to send to first planet worth colonizing.

Not surprisingly the closest planet a tanker completed an orbital scan of shows a climate hazard of 350, this is well beyond a hazard range making it worth colonizing, we’re on the hunt for planets below 100. I’ll only be updating on planet scans from this point forward when they uncover something interesting or are worth colonizing. 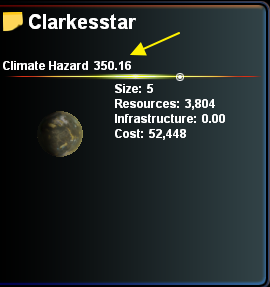 Good news: Our intrepid explorers have revealed a planet that is at the outer range of what we’d typically want to colonize and after a brief debate the colony ship was ordered to depart for New Melbourne. The arrows in the picture below point to the climate hazard for our species on this planet, the lower the number the better. Because the 2nd arrow is pointing at the cost of making this planet optimally habitable, and this will be an ongoing drain every turn until the planet is “fixed”. And it takes awhile to do too. 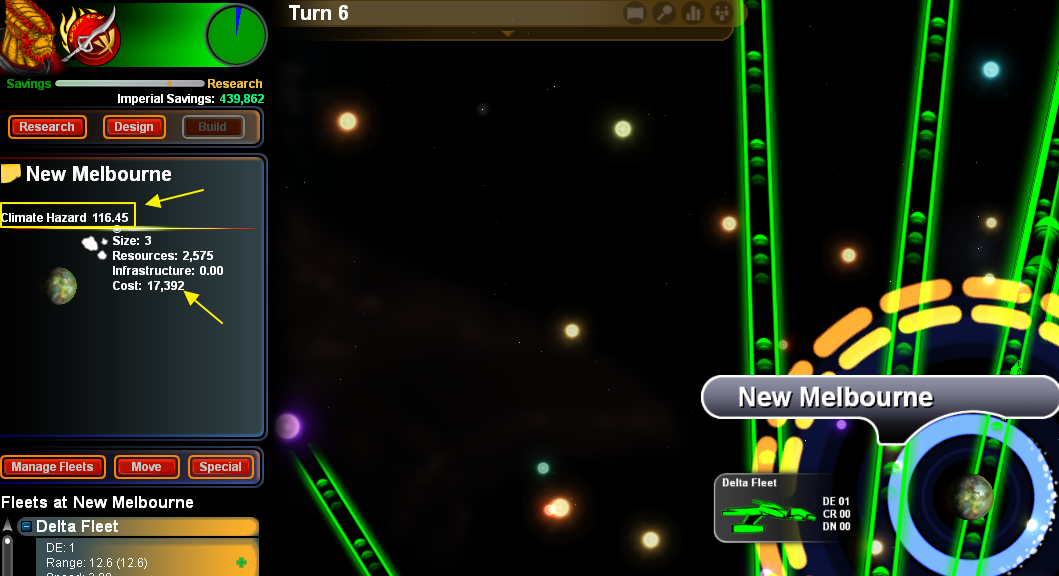 After finishing further drive improvements we’ve tasked our research team to work next on atmospheric adaption technology that will make it easier to colonize and speed terraforming. 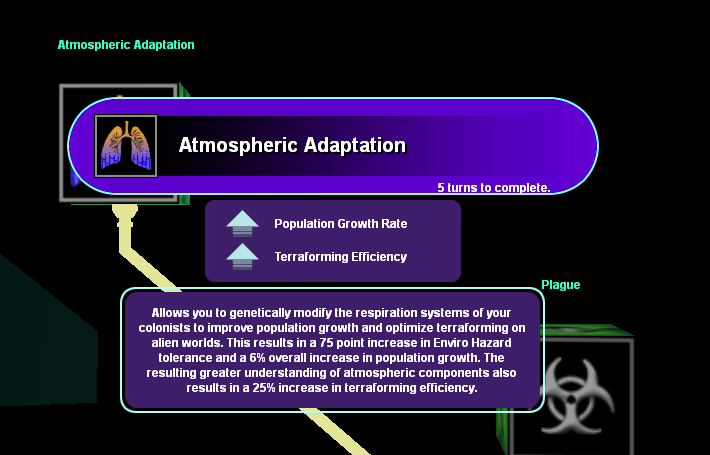 The scout teams looking for new planets gave our approach the less than charitable name: Spraying and Praying: 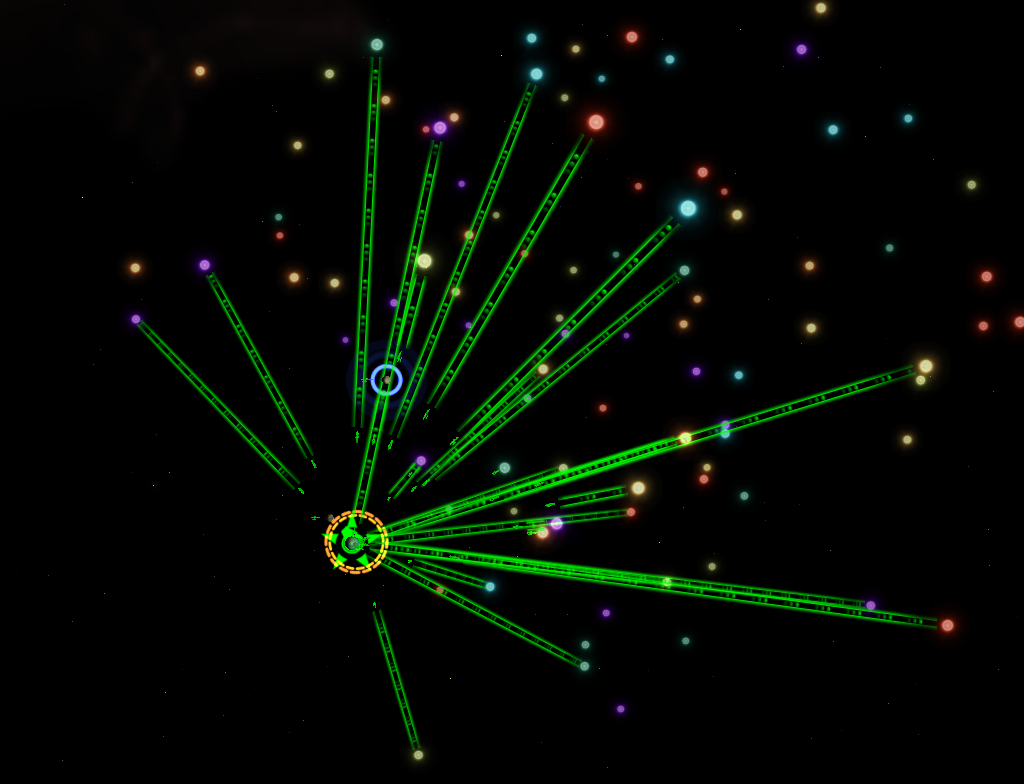 So far the focus is on finding planets and researching anything that helps habitability or ship drives that get us further faster. All well and good until you make first contact w/ no research done yet on weapons, armor or shields. ;)

Great stuff! I’m actually kind of glad to hear there’s no refitting. That rule means less busywork upgrading stuff, and it makes for interesting decisions about how many things to build while waiting for a new tech to appear. I always kinda hate that feeling that I’m constantly upgrading ships already in the field, especially if I have to drag them back to a starport to do so.

I’ll be interested to see how soon you have to start focusing on military strength. This game is more focused on combat than building, I gather?

Yeah no refitting is great and makes for more interesting decisions. I guess people whine too much at the thought of not having a fully up to date fleet.

Yeah no refitting is great and makes for more interesting decisions. I guess people whine too much at the thought of not having a fully up to date fleet.

The crew sizes are so small (hundreds) relative to population, that I never feel bad using my obsolete ships on various kamikaze missions. No refit also reduces micromanagement, which is sort of bad already with tankers.

But even tankers can serve an important purpose. I often play the Liir, who slow near planets, so I park
tankers with deep scan, in deep space between my worlds and the enemies, so the serve as refueling stations, and early warning systems.

This game is more focused on combat than building, I gather?

Yes, this is pretty much entirely combat focused. Colonizing planets is critical because it’s how you scale offensive fleet production (well, and defensive too).

I’m rolling the dice on no military research yet just because we’ve not made first contact.

At that point I’ll start mixing it in, but it’s not like you have to then go emergency mode because they’ll mostly just send feelers out scouting you and looking just like you are for planets to colonize.

You can also put obsolete ships on trade convoy protection.

You can also put obsolete ships on trade convoy protection.

Does anyone know if the complete edition on Steam supports ultra wide resolutions?

Also been a while for me. I think I remember it didn’t matter but maybe that’s wrong.

Yes, this is pretty much entirely combat focused. Colonizing planets is critical because it’s how you scale offensive fleet production (well, and defensive too).

I don’t really think that’s true. You are constantly left with trying to decide, how much of my resources are devoted to research, building colony ships, building defense platforms. or combat ships, or freighters to increase trade. Trade is critical to the race I’m playing now the Morrigi

But it is question of pay back period, some will be modestly profitable in 10 turns other will take 50 turns.

I think the reason SOTS is so much better game than Stellaris or Distant worlds, is the AI is better and the various space monsters are more scaring. I generally end up with no wars in Stellaris and quit out of boarding in SOTS, often quit because I get beat.

Well, I guess I think of it in those terms because my goal from the start is grab as many easily colonizable planets I can get my hands on for the purposes of getting them online so I can scale ship production for conquering everyone. I wouldn’t even consider playing this tall. I very much lean into 4X’ing it so all my attention is centered around conquering.

You’re right that it’s a balancing act where you spend your money. Which is why the pretty simple yet reasonably fleshed out bits for research/economy/ship design are so much fun. You’ve got sufficient agency to make the difference but not so much going on like DW and Stellaris that you feel irrelevant and along for the ride (plus the AI in those two don’t look to play the game all that well).

YMMV, but for me planets over 100 are agonizingly SLOW to come on line. And until they do they’re an economic drain. But that’s just the cost of doing business I guess, as you say they ultimately can be colonized.

And yeah, the stuff out there in the galaxy can be game endingly scary. And that’s in addition to the other AIs who are of course coming for you, there’s no way I could ever envision a SotS campaign with no war, typically it’s multiple wars.

Sorry I missed this;

Escorts are assigned to a trade sector, and will pop up when an attack is made. Old-tech is fine, but the AI will go for your freighter while you may want to set up a picket line. If they get past you, good luck catching up in time to save your trade goods while running on your old engines.

I hope to recover soon and resume where I left off.

In case anyone else needs an excuse to relapse, Steam has the game on sale for $2.50. I ended up taking their deal since my original copy is lost to the mists of history. (Gamespy? Direct2Drive? what a strange world the early 2000’s were)

Boy oh boy was Gamespy aka Qspy handy back in the day. I lived in that program when quake was effectively all the MP that existed and finding a server with a decent ping was everything.

Cracks me up recalling back then we broke out into Quake leagues based on connection speeds: HPB (high ping bastards) and LPB (low ping bastards). The latter of the two was anyone lucky enough to get a hold of DSL as opposed to most of us poor souls stuck on modems.

P.S. spend the extra 4 bucks and pick up the SotS dlc’s too.

I’m pretty sure it’s $2.50 for the Compete Collection that includes all the DLC. That’s an absolute steal for one of the best space games ever made.

To answer a question from upthread, I recently put another 30-40 hours in using the BotS mod and it worked great on my ultrawide monitor. (I don’t know whether the mod had anything to do with that or not.)

Oh, that’s right! Mods might be a thing now. Like @RothdaTheTruculent I picked the complete Steam version up recently because my copy+expansions were god knows what combination of purchase portals and physical discs (that are also god knows where for a media drive I don’t have anymore) back in the day.

Good to know about widescreen. I think you might have cost me my Sunday. ;)

YMMV, but for me planets over 100 are agonizingly SLOW to come on line.

This is why you use cruiser biome mission sections! Each one does a reasonable amount of terraforming (the Liir destroyer actually does some too!).