The fact that Otherside Entertainment owns this IP makes baby jesus cry. Underworld Ascendant was a steaming pile of dog shit and even 3 major patches later it is marginally playable. The company should have been shuttered and the SS IP released but somehow they held on.

The game was hot garbage and its backers felt (rightly) swindled by the alpha test that was released as a finished product. tl:dr- Unless Otherside farms out development this game’s chance of resembling anything like SS 1 or 2 is approximately zero percent.

For the umpty-nth time, SS3 is being developed by a completely different team within Otherside. It’s precisely analogous to the development of Daikatana and Deus Ex. Both Ion Storm, but separate teams. In fact, just like Deus Ex, the SS3 team is located in Austin and headed up by Warren Spector. 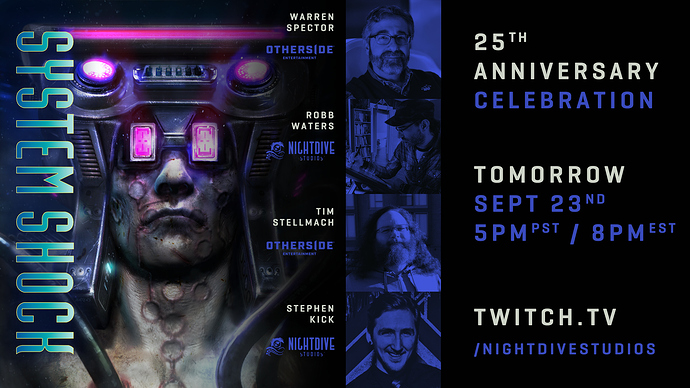 SHODAN is a great villainess, which is what Prey ultimately lacked. Although it replaced it essentially with a weird family mystery.

SHODAN is a great villainess, which is what Prey ultimately lacked. Although it replaced it essentially with a weird family mystery.

Pisses me off that Kick’s name is associated with the original product. It’s like as if (classic band here) held a reunion party and the corporate current music rights owner thinks he’s part of the band.

Oh, that’s exactly what it is.

Possible layoffs because they couldn’t secure a publisher for System Shock 3?

The System Shock curse lives on.

Surprising if they’re truly struggling to find a publisher. A Spector-helmed sequel with the licence should be very attractive. I wonder if his cache has diminished since he’s been away making Disney games.

In addition to the names above, the art director (Arturo Pulecio), senior systems designer (Herbert Piland), and animator (John Ford) are likely out, too. The studio’s community manager, who recently left to join Zenimax Online, said in a Discord post back in September that the game was still years away:

WOOHOO for hype! This is just a teaser though, we still have a couple of years ahead of us before we release. Also need that publisher

The game was announced four years ago and they’ve been without a publisher since February. The future’s not looking promising. I think a combination of immersive sims selling poorly, Underworld Ascendant being a disaster, and Starbreeze dropping all contributed to the lack of publisher interest.

The former Otherside community manager, who also left in November, posted on the official forums:

Extremely sad to see the Austin team affected by layoffs.

FWIW, I know people are concerned about the state of the studio. I’d be lying if I said I wasn’t worried as well. Someone from the Shock3 team has been speaking about their experience over here on the RPGCodex, if it hasn’t been linked already. In that thread, there are more concerns about OSE shutting down and what it means for Shock3 as well as ongoing projects.

I want to say, having been at OSE while layoffs were happening and having left just before this next round in Austin, I deeply admired every single developer I had the chance to work with. Having played the internal SS3 demo, I know the Austin team worked their asses off and made some stunning progress in the past couple of months. It hurts to see many of these developers out of a job on a project they worked so hard on. Some of the developers in Boston, like Jared, still haven’t found full-time work since June.

I understand this is the reality of game development, and doing this kind of work at an indie makes this so much harder. I watched firsthand a lot of the struggles that went into publishing UA. I wish all of our fellow former- and current-OSE employees the best of luck with their endeavors. I imagine the studio felt similarly a few years ago, when UA was floundering for funding. They pulled through, somehow. I hope OSE can pull off the same, while still maintaining the quality and lessons learned.

I genuinely wish and hope that the additional Boston project and SS3 continue to steer forward.

What the former Otherside staffer shared:

There’s a lot of criticism of Warren here that I don’t think is very fair. He was the most visible face of the team so I imagine it’s natural to assign him blame, but if anything we needed more of his direct involvement. The team had a lot of strong personalities and he was mostly hands-off. In person he has a very gentle, kind, and humble demeanor. He had a good vision for the game, and perhaps some ambitions that were outside our reach, but I don’t recall his involvement ever being corrosive.

The things that hurt us were:
Picking Unity over UE4.
Design being understaffed, and effective design leadership coming much too late.
Milestone tunnel vision. A lot of the work put into the milestone demos ended up getting thrown away.
The UA trainwreck.
Starbreeze pulling out due to bankruptcy.

Some things went right:
In spite of the technical difficulties with the engine, the staff at Unity were incredibly supportive and helpful. Some of the AAA improvements to Unity in the last couple years were born from the work they did with us.
Our milestone demos looked great.
We touched on some truly innovative game systems that I unfortunately can’t talk about. We shed sweat and blood to get them working, but it started to come together.

Yes, I can imagine investors backing away after Underworld failed in such a truly spectacular manner. Hell I’m just a consumer and I have bad feelings over it.

The design director just left, too.

Recently on Resetera, I pm’d Jason Schreier to ask him about the layoffs. He confirmed the studio had downsized, but stressed the remaining members were working to make it happen. I wonder if this departure, alongside the many back in November, signals the end of that effort?

Forwarding to last Friday, the same former employee revealed that while the core systems of System Shock 3 were done, OtherSide Austin was “critically behind” in content development, following by saying that “everyone on the content side is no longer with the studio.”

They added that, had Starbreeze not pulled their support as System Shock 3 publisher, the developer “would’ve delivered something interesting with some fresh and innovative gameplay, but a much smaller game than what people were expecting and inevitably disappointing for a sequel to such a beloved franchise.”

Lastly, when another user asked if System Shock 3 was abandoned, they responded with the following: “I don’t actually know what’s going on, but the team is no longer employed there.”

Being brutally honest, after what happened with Underworld Ascendant, I really did not expect this to ever get finished, and I was kind of glad about that.

You know what would be cool? A System Shock roguelike.

Isn’t that what the Prey DLC is?