Thanks for the support!

The KS is doing kinda well

Exceeding expectations, to say the least.

Just jumped on board for the Ironsworn Starforged. Looking forward to learning to play it.

Anyone wants to do some co-op let me know.

Vincent Baker recently posted a final PDF of both The Wizard’s Grimoire and related game The Wolf King’s Son to his Patreon (and I assume the Wizard’s Grimoire KS, at least for the former). Urge to do a thread play of one or both and/or an Ironsworn run rising…

Yeah, I got the Wizard’s Grimoire pdfs from the KS last week. I’m not on his Patreon, so i haven’t seen WKS yet. I did pick up Sundered Lands, and his couple of Under Hollow Hills games (Half-a-Fool and Midsummer Wood), too. I think at least one of the games in SL is specifically designed to play on message boards?

oh? That IS very interesting. More rpg than boardgame I assume. I must admit I have little understand about how this works in actual play, as I mentioned. I suspect it may also require a large amount of investment by the players to make this work?

I’d be very interested to hear more if you decide to give this a try!

Getting back to this, if you want to read some thinking on the subject, Vincent Baker has been doing a series of game design essays on his site (funded via his Patreon), and the latest one is directly relevant.

Here’s Ursula K. LeGuin: “ Conflict is one kind of behavior. There are others, equally important in any human life, such as relating, finding, losing, bearing, discovering, parting, changing. “
What would it mean to start with PbtA, but to swap out Apocalypse World’s model of conflict and replace it with…

How would you design your basic moves so that they don’t create emergent arenas of conflict, but instead create emergent ways of behaving , including conflict as just one among others? So that they don’t (just) clarify and escalate conflict, but clarify and deepen all the ways the characters behave and relate? How would you design your playbooks, what would make this character unique from that character in their ability to relate, their approach to finding and losing, parting and discovering, their capacity to bear and to change?
Come look at this, let me show you something.

This series has been AMAZING reading material tbh. Baker is thoughtful as fuck and a great designer. Can’t wait for the Q&A :-)

I’ve been really enjoying reading the little games I picked up recently, too- The Sundered Lands, the Hollow Hills spinoffs (apparently the whole thing is to be released soon?). I’m really wanting to get some friends together to try them out. As soon as the weather gets nice…

I’ve been plowing through the systems I mentioned above for the last couple of weeks, and honestly, they’re all starting to blur together a little bit. It’s also interesting how much of what people consider to be “core PbtA” elements within those games are, in Baker’s view, entirely extraneous, non-vital elements he happened to slap into AW that everyone else latched onto in addition to (or, more frequently, in lieu of) the “real” meat of the design paradigm.

For sure, but while I’m a violently aggressive linguistic descriptivist, I abhor the death of the author and dedicate myself absolutely to defending authorial intent, regardless of how dumb or bad it might occasionally be.

Fundamentally I rely on Vincent (and Meguey!) Baker to do really cool thoughtful brand new design things, and other people to run with them in a million directions. It’s a system that works.

The Heart is a very cheerful RPG:

One of the things I'm proudest about with Heart: the City Beneath is that all bar one of the 27 top-level class abilities kill the user, often instantly https://t.co/NwWcABWY4N 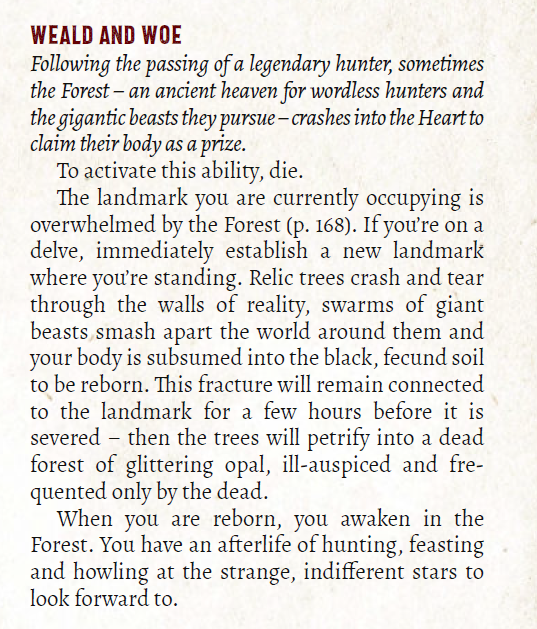 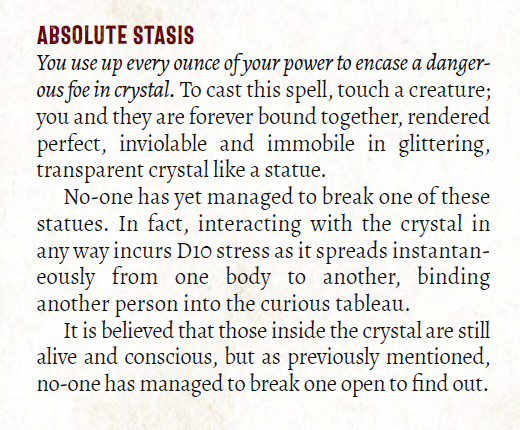 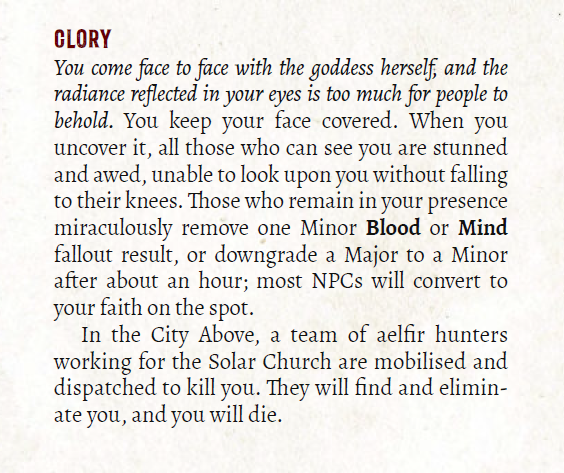 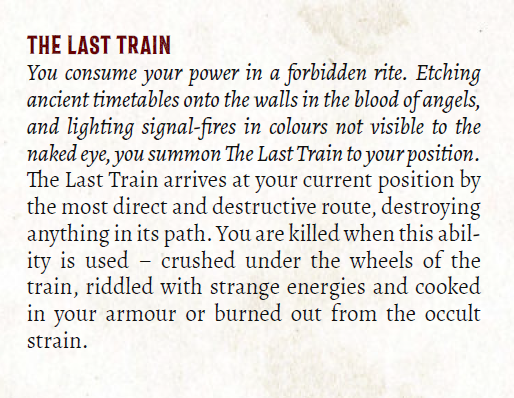 It’s worth clicking through to the full thread, which contains some of the bad endings for characters, too :)

With 45’ to go, I have just jumped into Ruins of Symbaroum KS: 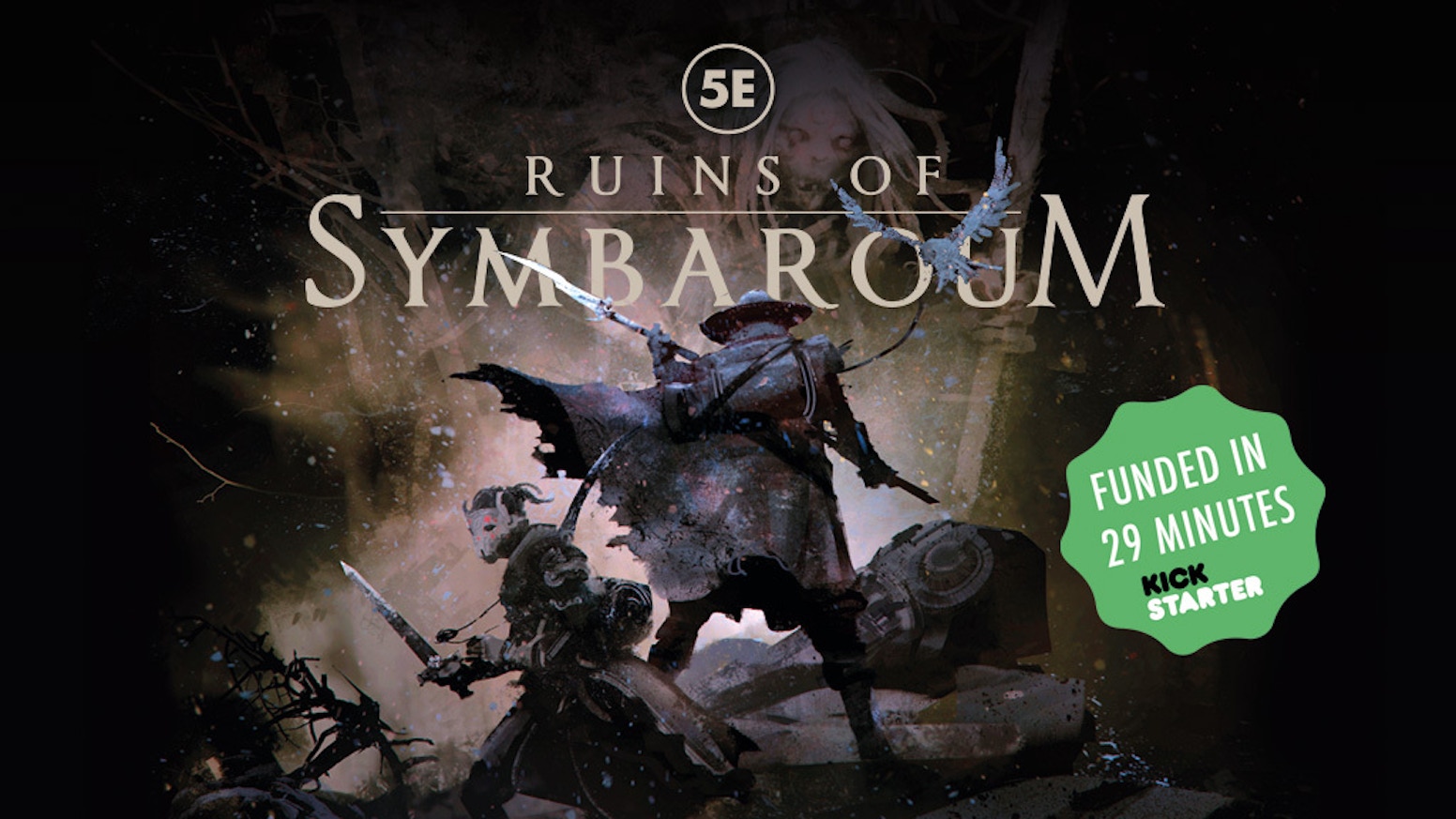 Ruins of Symbaroum for 5E

So many cool stretch goals unlocked (Warden of Davokar pledge level). And the dark setting adapted for 5E appeals to me. I hope to get to run an adventure at the roleplaying club I joined during lockdown next year (have yet to play face to face with the players but have loved meeting them online).

They are doing an end of campaign Livestream here: 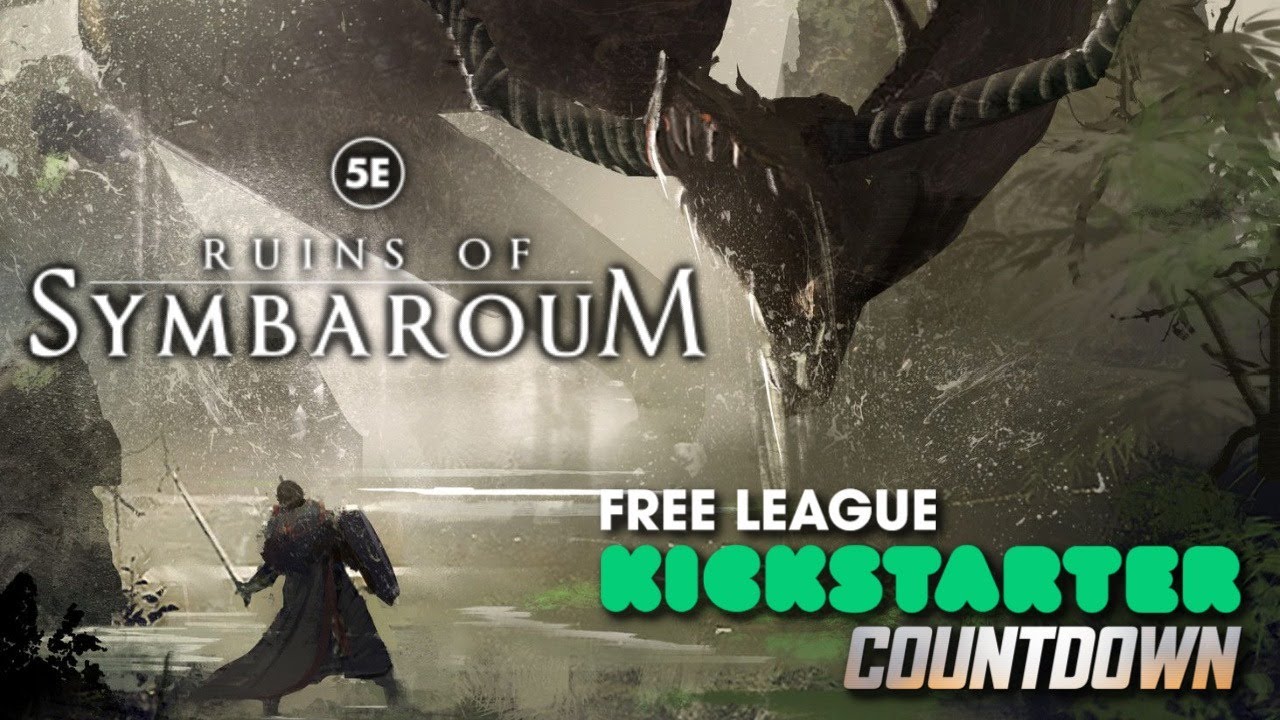 Next on the menu for me is this one:

With new adventures exploring the golden age of piracy and Jules Verne-style expeditions.

This is my favourite RPG right now. I was a late pledger to their first KS, it is a fantastically fun game. Finished one campaign with it worked Incredible well for us. Just enough of crunch to make it interesting but light enough to get out of the way while still being nail biting when you roll. Highly recommended, have never played a better RPG for pulpy action.

Awesome. That only increases my anticipation. I was tempted during the first campaign but unsure. Your experience is exactly what I was hoping to hear about it!

There is a good Facebook Group if you are interested in it, the devs hang around there and they really try to interact with the international community. Since they are from Italy its not always easy for them but they are a fun bunch.

Thanks for the reminder I need to finish reading Heart. It’s such a fucked up and cool setting. So differed t from Spire, but you can kind of se how they got here from there if you squint a bit. Too bad I’ll never actually get to play either one, though.

Hello fellow Warden of Davokar ! I am really looking forward to this!

I have a similar limitation. I read early portions of Spire last week, reveling in the atmosphere yet contemplating how much I would have to adjust for the tone to fit the groups I know to play it. I have to enjoy horror and un-heroic games in the reading, not at the table. Anyway, good to know Heart will also leak disturbing literary fluids from the page.

Hello fellow Warden of Davokar ! I am really looking forward to this!

Same here. Free League is putting out some really appealing settings. Their books are wonderfully laid out too. Hard to resist.

The reason I waited so long is that Gothic horror / dark fantasy or sci fi horror (Alien RPG) are genres that will not get played with the family. I really don’t want to be building up a RPG shelf of shame. But the offer was too good to refuse and I really hope to find the time to run it at the club next year.

As for Alien, I need to find a way to play it this year. It looks too good to be left on the shelf.