@Madmarcus You were looking for an Urban Fantasy TTRPG in last year’s thread, and Liminal was discussed. No one had played it, and you were unwilling to shell out a bunch of cash (I just reread the discussion). Well, I still haven’t played it (haha, I don’t get to play these things these days, just read them), but a bundle of the base book, the London source book, and a book of 7 scenarios is up on Bundle of Holding for $10. I decided to buy it to add to my ever-growing g digital stockpile.

Tempting! I might have to add it to my digital RPG stockpile also.

I know what you really want: Gamma World

Awwww yeah. Check this out - 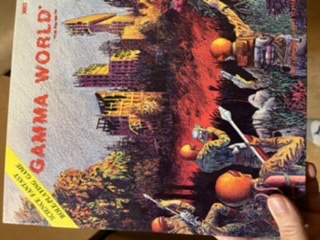 The flow chart for figuring out how to use technology in that game is my most favorite game chart ever.

I’ve had that box since I was a kid! I had no idea what a role playing game was, but I loved the art and the description of the world and its inhabitants on the back. And almost as cool as the game itself, it was my gateway to a lot of great science fiction like the novels of Brian Aldiss and Sterling Lanier. I’ve never even played Gamma World but it’s got a lot of sentimental value to me.

I’m considering picking up Vaesen from the same publisher as the Alien RPG discussed extensively upthread. It looks similar mechanically—dice pooling with sixes as successes—but with a more Call of Cthulhu investigatory vibe (never played CoC, but am familiar with some of the board games). All the rave reviews in this thread of Alien are pushing me ever closer to ordering it.

Anyway, Vaesen is set in nineteenth-century Scandinavia (a.k.a. the ‘mythic north’) and deals with investigating mostly unseen fairies (trolls and the like) and related creatures from Scandinavian folklore. It seems to have an industrialism vs. nature conflict inherent to it: the modern displacing folk beliefs of the old, science vs. magic, etc. I’ve also been interested in a ‘mythic’ US setting—striving for an Over the Garden Wall kind of vibe—and this seems easily adapted to that once the Scandy stuff is exhausted.

I bought Vaesen in the Free League Black Friday sale. The source book just arrived and I’m impressed. This has instantly become one of my favourite source books ever.

The illustrations are beautiful, otherworldly and/or spooky. 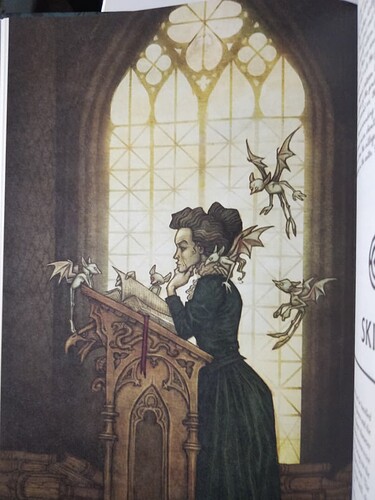 The book contains nursery rhymes and traditional spells of the region, which adds flavour. The rules and setting are well laid out. It all seems simple enough to learn and run from a quick page through. Familiarity with other Year Zero engine games helps a lot, of course. 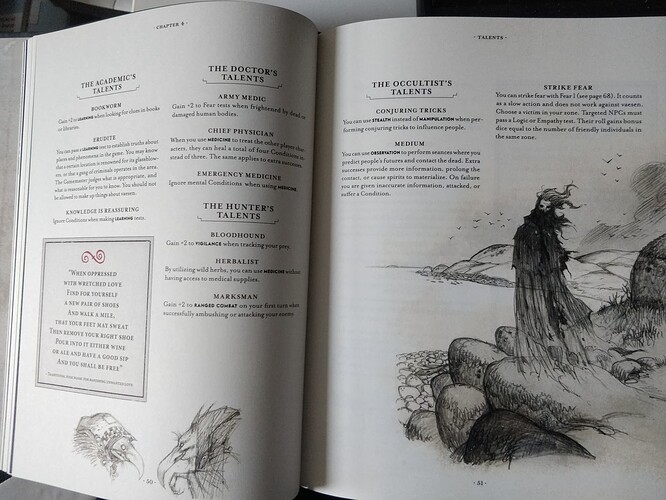 The paper is also thick and feels nice to the touch, which doesn’t hurt. What an awesome product.

I don’t know whether @Razgon and you ended up getting the books. But having recently watched an actual play and seen the quality of the core rules, I would recommend giving it a chance.

I’m currently playing in a Call of Cthulhu campaign with another one to follow. But I’ll definitely try to make space for some Vaesen in between.

Also, Free League are launching a campaign for Vaesen Mythic Britain & Ireland this month . I don’t think I’ll be able to resist it. 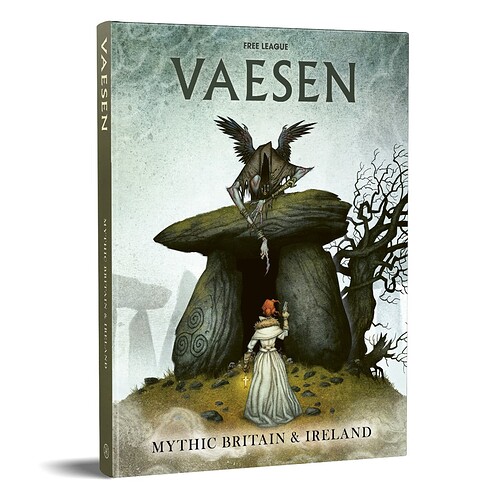 I don’t know whether @Razgon and you ended up getting the books.

Not yet. I got into Symbaroum instead because a local game group started playing it, but that campaign is on indefinite pause (thanks COVID). I’m going to try to rope in some family members over the holidays to play Vaesen with me, so it’s still very much on my mind.

One thing I like about Fria Ligan is how much they support their games post release. Symbaroum has a (pretty good!) multi-part campaign plus lots of other supplements for instance. While Vaesen doesn’t have a linked campaign, it already has a few supplements, and the British Isles one is probably going to be great. It’s a nice contrast to most publishers who put out a rule book and then wash their hands of the product aside from occasionally reprinting it (e.g., I would really love that Band of Blades continuation right about now, Evil Hat).

Nice. I’ve got Ruins of Symbaroum, the 5E conversion, coming next year (we just received the final PDFs today). I’m also looking forward to playing that campaign. You aren’t wrong about their support for their products. The Throne of Thorns campaign will also be coming out for 5E and I hope to play through it with my roleplaying club.

And, of course, Blade Runner is coming out next year. I probably should commit to buying everything FL does at this rate. :)

My daughter and I attended our first TTRPG convention in 2 years yesterday. Between the stalls, chatting with various RPG and boardgame designers and the board game library, it felt a bit like the before times. Except with masks, COVID passes (double/triple vaccination of proof of recent recovery) and tests.

That said, Dragonmeet is reasonably small by design (2 floors, a few seminar rooms for talks and one giant tabletop gaming room with a boardgames library). So you don’t have to deal with huge crowds and the stress of a comic con.

It’s also a very dangerous willpower test when you haven’t had the chance to visit one in a long time. 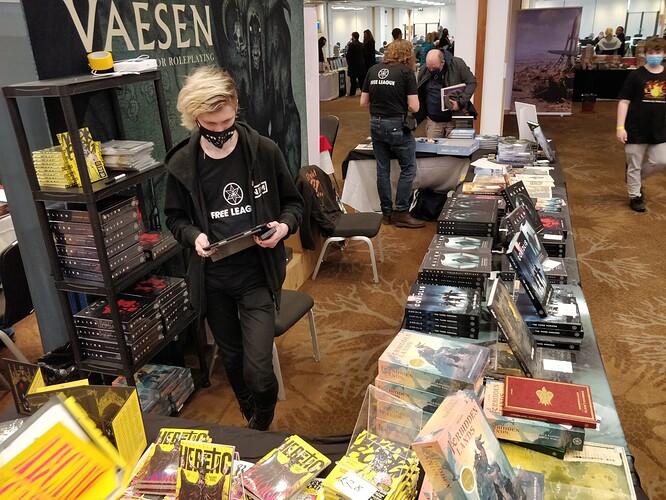 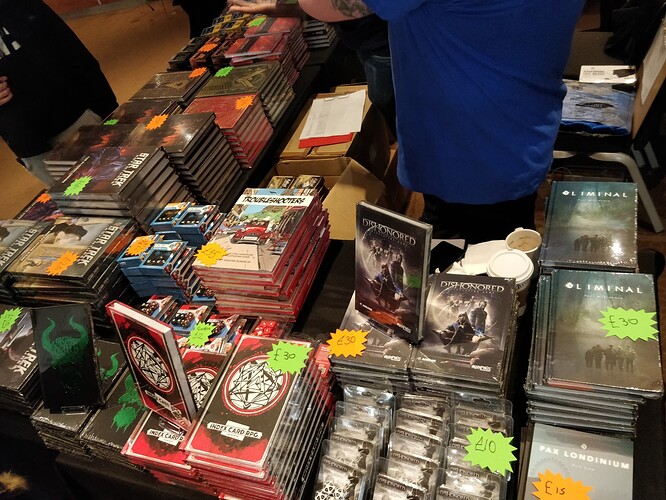 That said, it was fun to chat with creators of indie RPGs about their games. I found out there is a post Brexit apocalyptic RPG published by Leyline Press for instance. “It can get a bit heavy”, I was told. :) 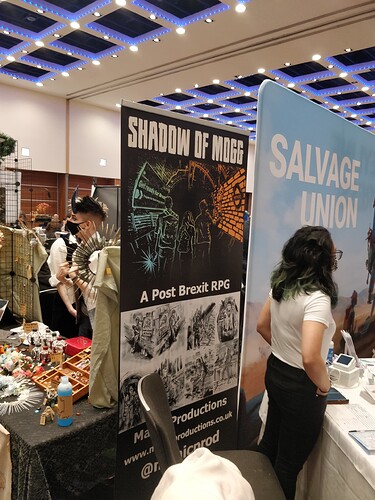 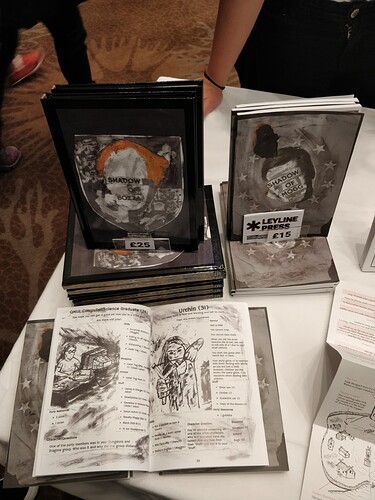 We also chatted with a Scottish company and their Carved in Stone project (which I backed), the author of the Era system which has source books settings as diverse as Sci fi, Post Apocalyptic Survival , super heroes and a few others. Also Leyline and their approachable and super fun Salvage Union. I also backed that one on the spot. My daughter and I were playing a boardgame while a playtest was going on nearby and the players were having a ball. I then chatted with some of them who were super enthusiastic about the ease of play and focus of the gameplay. I went to chat to the designer and what he showed me about gameplay and advancement sounds great. It was an easy back (and we got the physical beta rulebook as a perk too, which doesn’t hurt). 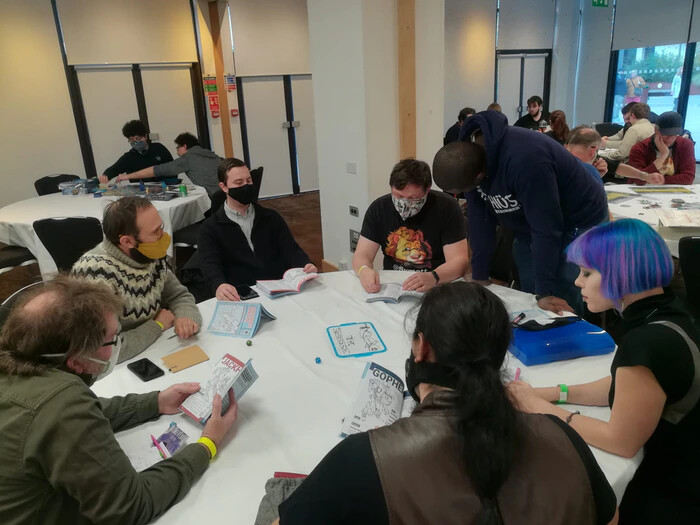 It was fun to remember there is a whole community eager to chat and play together out there. We had a ton of fun.

We brought back a decent haul (everything to the right of Conan to Era silence is what my daughter spent her own cash on. She made sure she had seen everything before deciding what she wanted to run or get): 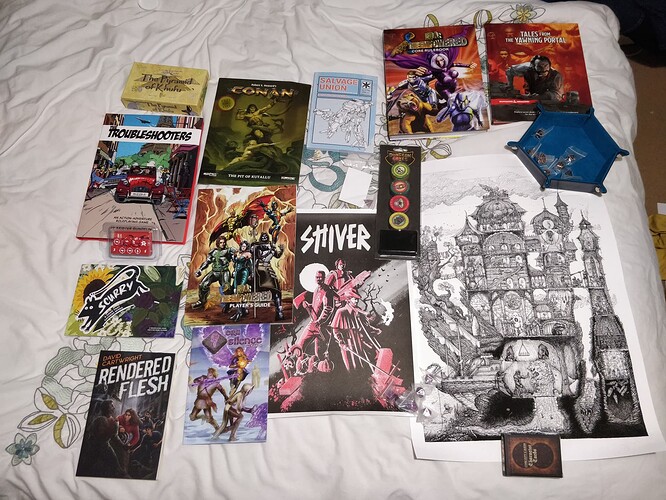 Now I need a year to recover, read through the stuff and play. She wants to find the next one ASAP. :)

Very envious! We’re hoping to make GenCon 2021 happen in our group, but that’s a long, long way away still. . .

It’s also a very dangerous willpower test when you haven’t had the chance to visit one in a long time.

That Free League booth would test my mettle for sure.

That Free League booth would test my mettle for sure

The only saving grace is that I already own everything Vaesen, most of Alien and some Symbaroum. As for Mork Borg, trying to read the rules gives me a headache. So I’m immune to its “charms”. :)

Free League ça. do no wrong though. I’m also in for Blade Runner next year.

Apparently, it’s pretty bleak, full of moral quandaries, groups trying to navigate them and no jobs (as shown on the page). Basically every day life. :)

Also, Free League are launching a campaign for Vaesen Mythic Britain & Ireland this month . I don’t think I’ll be able to resist it.

Looks like this has Kickstarted now and is already having 600000 SEK, which I think is a lot. I bought the original Vaesen book even though I will never ever in a million years play it, just because I love reading this stuff.

Vaesen is such a beautiful book and a simple, elegant system. I will find a way to run it, just because it’s so awesome. Having a local setting with the new Kickstarter might make it easier. But, either way, I want to give it a try.

Awesome you went to Dragonmeet. Next year I hope to go again too! When my kid can get Vaxxed. The guy running the Playtest in the picture you posted is a buddy of mine, we play regularly together. My whole RPG group was there except the American and myself. Love meeting my peeps there for a long weekend. It’s a lovely experience full of games and way too many ways to spend ones cash.

Awesome you went to Dragonmeet. Next year I hope to go again too! When my kid can get Vaxxed. The guy running the Playtest in the picture you posted is a buddy of mine, we play regularly together.

Really? He was awesome! I didn’t get a chance to chat with him after he finished the playtest as he disappeared before I walked over. But he ran the game with great enthusiasm and the players loved him. You can tell him he is a big part of the reason I backed Salvage Union. :)

I hope that we get to meet up if you make it to Dragonmeet in coming years. My daughter will not allow me to miss one. So I’m pretty much guaranteed to be there!

Promise and I will let him know. He runs the Playtest rounds online right now, you can join on their discord if you want. He is a legendary GM, the best I personally know and a wizard at improv games. So much fun playing with him, always worth it.