A couple of last thoughts. First, we won’t be able to release the new OGL today, because we need to make sure we get it right, but it is coming. Second, you’re going to hear people say that they won, and we lost because making your voices heard forced us to change our plans. Those people will only be half right. They won—and so did we.

The Open RPG Creative License (ORC) will be created in order to support the industry in conjunction with fans and creators.

So, how long will it take? We expect a first draft released for feedback in February, and the final iteration depends on the publisher feedback we receive, finding or establishing the right foundation to protect the ORC, setting some standards agreeable to all publishers, and other elements vital to the long-term health of the ORC. Ultimately, the timeline will be driven by Azora Law, and they won’t release the final version until it’s ready.

The Open Gaming License was meant to benefit all game companies in the hobby games space. As the leader in that space, Wizards has the largest network of players and therefore is most positively benefited by the OGL. We’re baffled by the business rationale that drove the leaked OGL 1.1 and the negative impact to the entire hobby industry that its loss would create.

The ORC will not be limited to just print books and static PDFs. As technology changes, publishers will be empowered to take advantage of the same license and spread their works far and wide. From AR/VR to virtual tabletops; from screen readers to narrated novels; the Open RPG Creative license will let publishers plot their own course and open their works to legions of fans who otherwise wouldn’t have the opportunity to know about them.

Free League announces their own OGL.

The Year Zero Engine in various iterations has been used in most Free League RPGs in recent years, including Mutant: Year Zero, Coriolis, Tales From the Loop, Forbidden Lands, ALIEN, Vaesen, Blade Runner RPG , and the upcoming The Walking Dead Universe RPG . The YZE is an accessible, fast, and adaptable rules framework that encourages story-focused and player-driven playstyles.

The new Year Zero Engine OGL is designed to be easy to understand and use for creators. It will give creators an irrevocable, worldwide, and royalty-free right to use Year Zero Engine Standard Reference Document (YZE SRD) and freely publish their own roleplaying material based on it.

Alongside the new YZE OGL, the YZE SRD itself is being given a major overhaul and update, based on the developments of the Year Zero Engine in recent years. The new SRD will include more rules variants and add rules for chases, vehicles, travel, and magic.

@Nightgaunt Guess what just came in the mail for me! 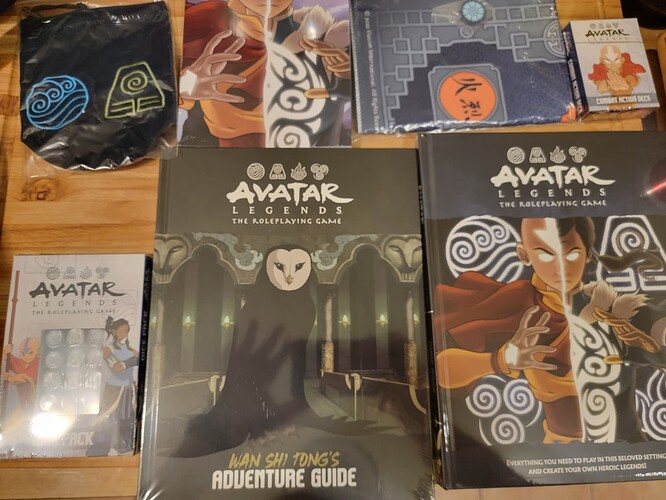 I’ve been getting really excited to run the game for my kids here soon. They had three copies of that kickstarter bundle at my FLGS last week… I wonder if any are left?

One of my friends is into SF RPGs. I haven’t played Stars Without Numbers yet, but I was duly impressed with the Sectors Without Number website. It auto-generates many solar systems with a surprising number of cool points of interests.

I suppose this could be used for other systems or story generators, too.

The rumored Humble Bundle is live.

We’ve teamed up with Kobold Press and more TTRPG publishers for our newest bundle. Get books like Book of Ebon Tides & The World of Lost Lands. Plus, pay what you want & support charity!

I’ve honestly never heard of a bunch of these.

Yeah, a bit disappointing. The rumor was that we’d get a repeat of the Pathfinder bundle with Kobold Press stuff, but this is Kobold with Frog God, Troll Lord, Necrotic Gnome, and Nord Games.

Bundle sites are prioritizing OGL 5e stuff because of the reasonable worry that they might not be viable once the new OGL hits.

There is some nice B/X stuff in there, along with Old School Essentials to run it as well as Castles & Crusades, which has been mentioned around the traps as a fine D&D alternative.

I also expect various follow up bundles for completely non-5E stuff in due course.

I mean, I bought it, just to support the devs, and there are a few platform agnostic books, as well as some OSE stuff. 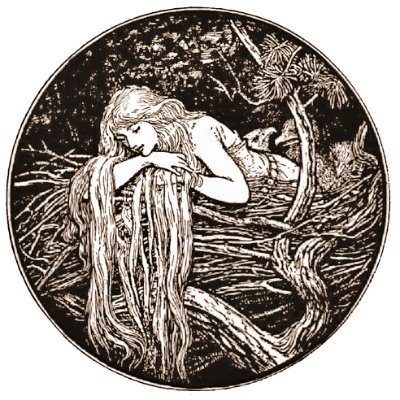 @NightSkyGames
So this happened! We're working on an #SRD for #ApocalypseWorld to support future #PbtA creators/designers. Sign up for our newsletter for announcements as they come: lumpley.games/newsletter/ https://t.co/5vhQNjTrjl 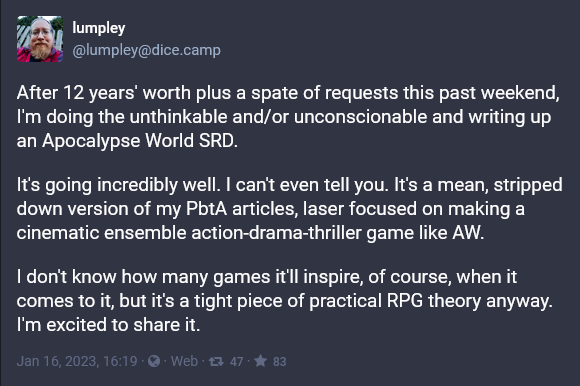 So weird, given how strongly Baker stressed that PbtA was a design philosophy and not an actual system framework in his lengthy but intriguing blog series on the topic.

That said, I’m here for some official from-the-mouth-of-god support on this topic, given that I’m slightly devving a game in that system :D

It might be the case that D&D had the first substantial one released in coordination with the original OGL back in the 3E days, or maybe someone predated that, unsure. In any case, different publishers take it to mean different things, but the general basics are:

My favorite SRD these days is the one for Fate by Evil Hat – https://fate-srd.com/

They are very, erm, full-featured, basically transcribing the bulk of the rules text from the main Fate books - the original Core rulebook, the faster-to-play Accelerated rules, the newly minted and refined Condensed rules, and even some of the Fate Toolkits that provide details on how to customize the game and some of the Worlds of Fate setting books.

While their SRD doesn’t feature art or some of the example text from the sample campaigns, it’s honestly pretty comprehensive and very searchable/hotlinked together.

In the case of Baker’s stab at a PbtA SRD, it could really wind up being almost anything – a more structured step-by-step guide to thinking through his and Meguey’s design philosophy en route to developing your own game system, perhaps, or maybe a structured stripped-down basic system incorporating some of his preferred expressions of PbtA.

He specifically says an Apocalypse World SRD, which I think is probably a bit different than trying to encapsulate “PBTA” (which as you say, he’s always insisted is a design philosophy). What that ends up looking like I still couldn’t tell ya.

Call of Cthulhu reigns supreme in South Korea. (Follow up article to the news that it is the #1 western TTRPG in Japan.) 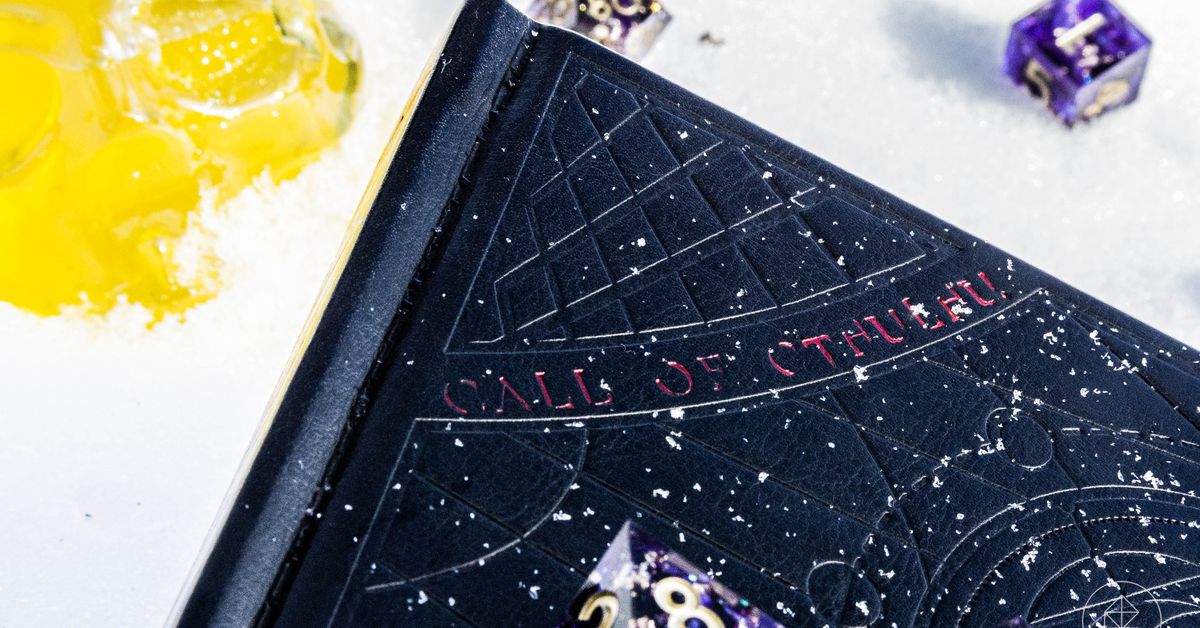 The many-tentacled reach of Call of Cthulhu, among Korea and Japan’s most...

“When I look for players on social media, the male-female ratio is about 1:1,” Suisho said. “I would have no trouble in gathering players for a female-only game, at least when it’s online. I’m not sure about the current offline situation, as I haven’t been to such events for two or three years.”

Kim also estimates that over half of the players in South Korea are women, and attendance at a small convention Dayspring Games hosted in 2019 was over 70% women.