Tapbots's Ivory for Mastadon iOS client is out (early access)

On the App Store, for those of you suffering withdrawal from TweetBot and have also moved to Mastadon. I haven’t yet, don’t know how/where to start. 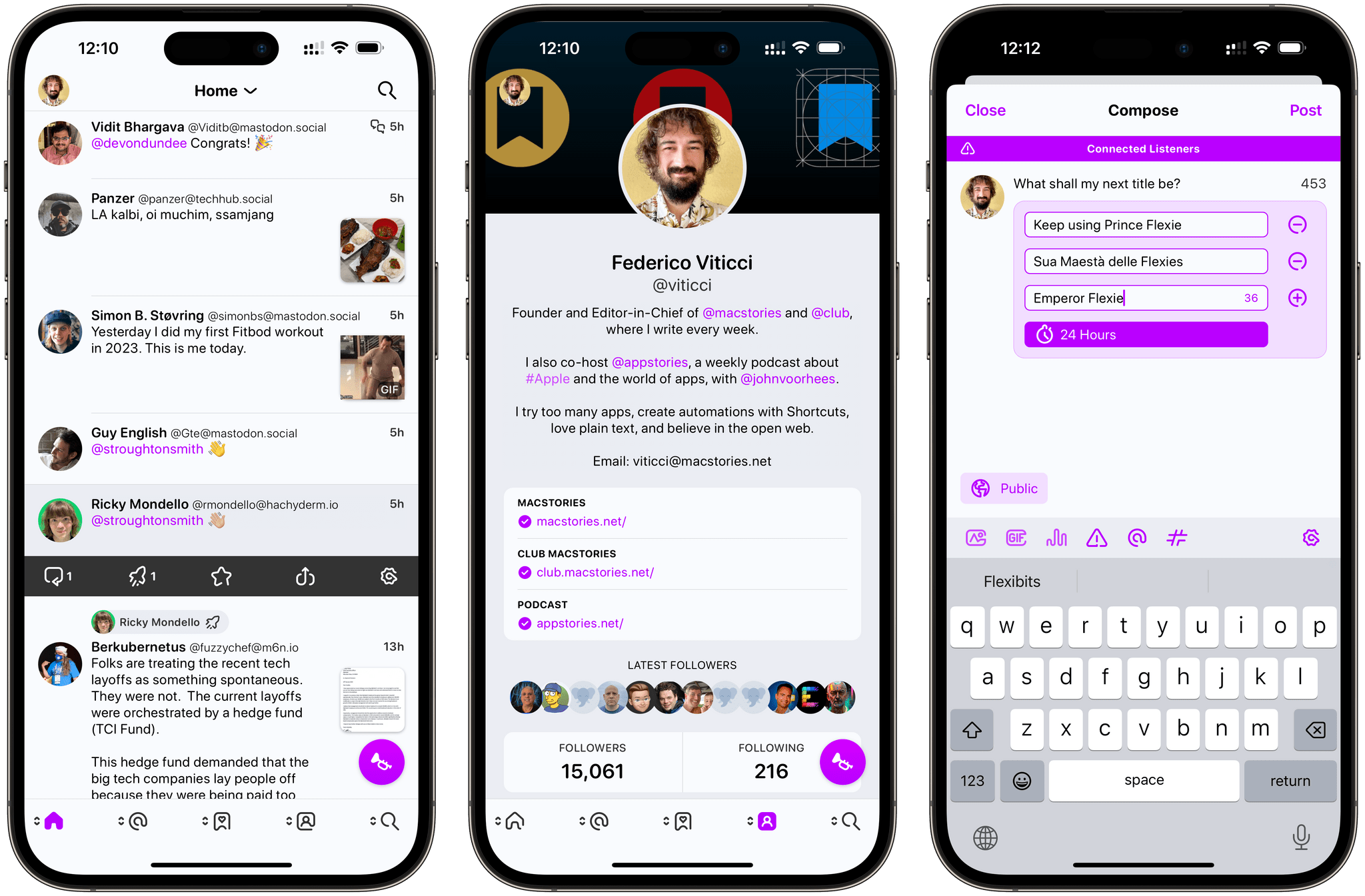 There’s an intangible, permeating quality about Tapbots apps that trascends features and specs: craftsmanship. With Ivory, launching today on the App Store for iPhone and iPad, you can instantly appreciate that level of care and refinement that the...

Sometimes when the universe force quits a Twitter client, it launches a Mastodon client. Rising from the ashes of the recently departed Tweetbot, developer Tapbots has officially launched its much-…

Subscription obviously, so that’s gonna be a no for me. Tweetbot was, IMO, one of the best apps ever made, and I didn’t subscribe. I continued using the old version instead.

Mastodon is easy, there are lots of think pieces taking you through the transition. Pick a server, migrate all your follows that moved to Mastodon via the website everybody uses, and move on with your life. It looks identical to Twitter. Functions the same too, other than the distributed stuff which is mildly annoying when you want to follow someone new (you need to cut and paste their URL to your instance) but otherwise fine.

Didn’t see it initially and assumed the recurring cost like last/latest version of TweetBott:

While Ivory has been free during the beta period, it will be a paid product within the App Store: you can pay $1.99 per month or $14.99 per year."

Right, it’s the same as Tweetbot was in its final incarnation.

This isn’t the place to bitch about it, but long story short I will never, ever, pay for an app.

Tusky for Android is free and nice

Android app pricing is overall much less predatory. The apps themselves still tend to be less thoughtfully designed and pleasant to use, but the vast majority of those awesome iOS apps have a mandatory monthly subscription so really, probably better off on Android.

I am utterly dumbfounded on why everyone in the Apple-centric media is going nuts about this. Mastodon must be some sort of holy grail of social media.

It exists as the only alternative to Twitter right now. They’re just starved to continue their attention whoring.

I liked twitter, and most of the communities I followed are still there. I get being happy with it, but everyone who covers Apple is posting about this. It’s as if Apple themselves made it.

Some people are just overly excitable longtime fans of Tapbots and their apps.

I think its more of a sign how shitty the Apple media have become.

Ignore me, I am just grumpy.

John Gruber, Federico Viticci and Jason Snell tend to be an echo chamber at times. At least they’re not as huge a suckass as Rene Ritchie. Marques Brownlee is also from the same school of uncritical PR apologist sometimes.

I loved my Tweetbot, had it since I hit Twitter all those many years ago since I couldn’t stand the official app. I left Twitter with Tweetbot’s recent demise and am fine with it.

I tried Mastadon and deleted my account within a pretty short time frame of weeks. I just had so little interest in building a new social network of followers/follows. If I had stuck, I would definitely have jumped on the chance to use Ivory if it was as good as Tweetbot was to me. Tapbots pushed it heavily when Tweetbot was in its final days and I was tempted at times to give it a try.

Can anybody recommend a decent Mac-native Mastodon client that has scalable font sizes, sane refresh behavior, and timeline synchronization?

Ice Cubes has a completely counter intuitive refresh mechanism, though it IS otherwise good. Mastoot is better WRT sync, but has fixed font sizes that are way too small on Mac. None of the others I’ve tried so far are particularly good

Thought it might be worth posting a week-later update to my own question:

Ice Cubes is evolving rapidly. The author claims to have improved the super-glitchy and counter-intuitive refresh behavior and speed, but there’s still no timeline synchronization. The schedule for that feature is unknown.

Mammoth for Mastodon is in late TestFlight beta and is looking pretty solid. It has fewer features than Ice Cubes and isn’t as pretty or custom-themed as Ivory. BUT it looks pretty good, it has scalable fonts, it has timeline sync, and it has a Mac client. I don’t know what the author’s business model will be when it launches (probably next week), but I’m likely to try it assuming it isn’t a subscription.

Mona (from the people who made Spring for Twitter) is in private TestFlight beta and is well regarded, but I haven’t been able to try it so can’t comment usefully.

Ice Cubes is evolving incredibly rapidly. The client is noticeably improving in real time. I wish more people I follow were on Mastodon!

I’m also using Ice Cubes primarily, though I’ll probably switch over to Ivory when/if I’m using Mastodon enough to also use it on my laptop. Right now I’m only using it on my phone so syncing isn’t a concern.

I had actually just started to appreciate Ice Cube’s manual “load one post at a time” when they switched it. I think if the button to load the next post was at the bottom of the screen I may have actually even preferred doing that, or at least been interested to try. I hope it comes back as an option.

Also the Ice Cubes icons are… something!

Ice Cube’s manual “load one post at a time”

I can’t (personally) fathom how that’s more useful than loading all new posts and leaving the view where you are. You don’t get interrupted and can then freely scroll forward / backwards as needed. The other way, you have to keep hitting the load ONE new post button in order to (tediously) catch up.